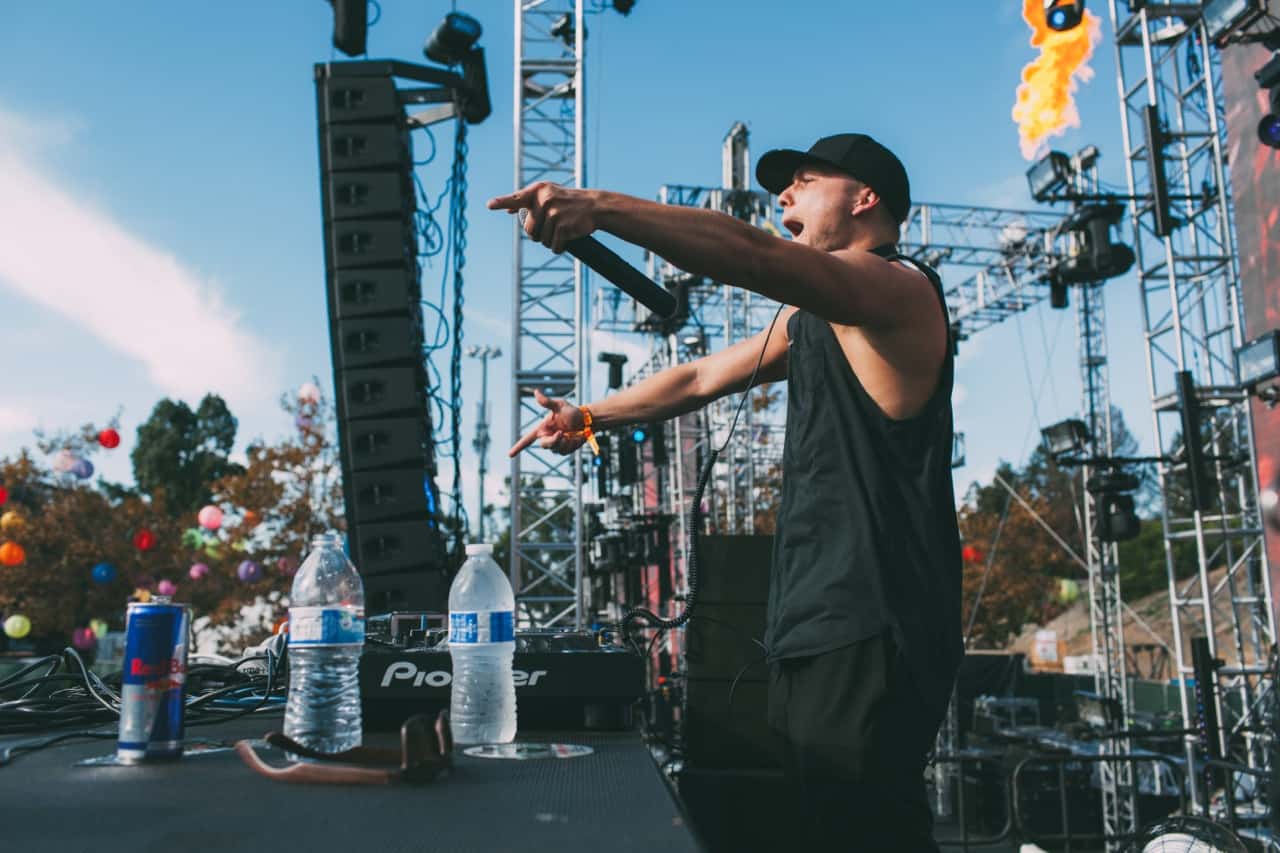 It's not hard to see why Party Favor is one of the most explosive rising artists in electronic music when you see him spin. This past Saturday at Insomniac's Beyond Wonderland in Mountain View, California, a fairly small crowd at the start developed after 30 minutes into a packed madhouse after he took over the decks (thus verifying the stage name, Madhatter). After his set, we had a chance to talk to Dylan (Party Favor) about his whirlwind year and all the bass.

If you remember about a year ago, Party Favor was the guy who remixed Bro Safari‘s “Drama” and subsequently won that competition, the only one he's ever entered. Since about that time, his tunes have been featured on ESPN and more with a number of viral remixes. Now, he's moving the ball down the field with more thrust since Mad Decent picked him up and he's throwing down fire like his latest tune “Bap U” (OUT NOW, get it HERE for free).

With a brand like Mad Decent, you're going to reach a crowd you never did before. But I think I fit really well in with that brand because the music that I make and the energy that I try to bring to my sets, my style, my sound kind of fits with that. It's also weird, it's different. Not the same cookie cutter shit. For me, I'm constantly trying to make stuff that's maybe familiar enough but different enough that it's me. It's just constantly to be pushing the sound and make better remixes, get better as a producer, play bigger festivals, hopefully get this on a commercial or something big like that. I don't have any set goals because so far I've broken all my goals. So I just want to keep going.

Dylan says that what stands out to him from all the positive reaction to “Bap U” is that there's also more people voicing their opinion, and as a consequence some random negative feedback.

When people hate on songs, I love it. It makes me want to get better but it cracks me up that people get so angry about stuff. People tell me that's the worst song they've ever heard and they want me to die. That's cool (laughs).

His progression, however, over the past year is a testament to his character. He looks like the new kid on the block but he walks every street like he's been there before, always prepared to play music for the city he's going to and aware of the history (evidenced by dropping Mac Dre tunes in his set for the Northern California crowd).

One huge thing in this scene is artist support. We all support each other. To be a peer of some of these guys I've looked up to for years and years and years, it's incredibly amazing. I just literally followed Donald Glaude whose an incredible house legend. I couldn't believe it. I walk up there like, “what am I doing playing after you.” It's crazy it's surreal. I'm enjoying the moment, just taking it as it comes.

We talked about the past year and how things have changed.

It's crazy. A lot of people don't realize but when you look at a DJ you like, they all started from the bottom. For most of them. There are some exceptions but people forget there's a lot of work that goes into it, precursors. For me it's an absolute dream come true. I just got to play an Insomniac festival. To get to play for a crowd like that was just amazing. It's humbling to see all the hard work be responded to but it also makes you want to work even harder to get bigger and better.

He's a guy who looks like he could easily be an athlete or a politician, too. We talked about his background and how he got into electronic music.

I come from a film background. I went to film school, I was going to be an editor working at NBC in Los Angeles. Slowly but surely I'd been wanting to do this since college. I was kind of dabbling here and there hoping something would maybe take off or get a break. Through that creative side of things…cutting and chopping and being constantly around stuff where I have to make sound for different edits and things like that, I kind of got into this world where I was like, “this is my avenue to make music.” It was a chance for me to express myself musically, if you will.

If you haven't heard his latest song “Sweat,” (OFFICIAL VIDEO BELOW) it's another example of why Dylan is killing it. The sound is very similar to a Major Lazer and it's commander Diplo, whose influence has played a role.

I think what's cool about house music, bass, house, twerk, whatever you want to call it… is that it's starting to bridge a lot of genres, styles. What's cool about that is I have this girl whose singing this almost dance hall style voice over white people sounds with a crazy beat and all this stuff… there's this really cool hybrid where it reaches a broader audience. I was influenced by Major Lazer because they were taking those vocals that are so powerful and make you want to move and dance. I just want to make stuff that's crazy energy and makes you groove.

Thanks for the time Dylan! Check out the new tunes and get ready for that new new! Who knows what 2015 will have in store.

In this article:Bap U, Mad Decent, Party Favor

JK. Crazy part. Y'all believed me for a second. With hundreds of thousands of people set to “storm Area 51”, Diplo took to Twitter...