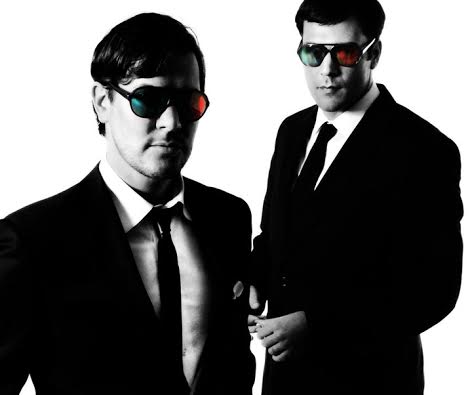 “This part of the club used to be hoppin’ back in the day,” states David Carvalho as we walk into a side room at the off-the-wall San Franciso nightclub known as SupperClub and find a comfy, more quiet spot to sit for our interview. I looked around at the white beds placed around the room as David finished his thought: “this whole room used to be just beds, actually.”

He and his partner, Chris Harnett, together make up the funk-based, hip-hop inspired production duo, WhiteNoize. Based in San Francisco and DJing since way before the EDM craze even hit, WhiteNoize has quite a solid background boasting 4 years at Coachella, both weekends at 2013 Ultra Music Festival, and opening spots for artists such as Kaskade and Dirty South. On this particular night, the beat-making friends were playing a special set for close friends to celebrate David’s wife’s birthday.

Me: Describe your music for those you aren’t familiar or have yet to discover WhiteNoize.

Chris: I would definitely say it’s a funk-infused, hip-hop based sound. I love hip-hop, I mean, we both started out as hip-hop DJs, so that’s where we get our inspiration.

David: It has a house undertone of course. We love EDM. We loved EDM before the whole EDM craze hit. We were both ravers. When I was 16, I used to go to huge underground warehouse raves where the DJs would have to break in and crowds of people would just show up, and you would just rave all night. And there’s definitely something powerful about looking out at a crowd of 100,000 people and see everyone sharing the same moment. But San Francisco—or San FranDisco as some use to call it–definitely had its 90’s funk and disco phase. And that’s what we like to sample in our music. It’s different; fun but still club ready. We try to keep the musicality in our music.

Me: What came first? DJing or Producing?

David: DJing, for sure. We’ve been in the game for over 15 years.

Chris: And there was a point where I realized I wanted to be more on the creative side of things. So I just bought some equipment, a sampler, I knew how to play the guitar, and I just taught myself.

David: I also think we both hit a frustration level: we did all we could do here in terms of DJing. We played at all the hottest clubs, were getting paid top dollar, we hit a glass ceiling.

Chris: Everything you need to know is out there. You can basically YouTube anything and figure it out. You don’t need lots of fancy equipment or spend thousands of dollars on classes. Some of the best producers we know hardly have any equipment. It’s not what you have, it’s how you use it.

Me: What would you say your guys’ biggest accomplishments have been in your career?

David: Wow, that’s hard to say. I mean, I can’t really pick one thing. We’ve played Coachella 5 times, Ultra 4 times, and have made remixes for some of the biggest names in the game. Honestly, we’ve been doing this for so long, we just try to enjoy every moment. We never know when we’re going to be done; this could be our peak right now, so we never want to take anything for granted.

Chris: For me, it’s when I hear someone like Chuckie or Carl Cox playing our song. That means we’re doing the right thing.

Me: How did you guys meet?

David: We actually met at a wedding. We were DJing with the same company and realized we both loved hip-hop. Then we became roommates and lived together for years.

Me: Who has been your favorite artist you’ve collaborated with?

David: It’s kind of funny: we won a remix contest with Zedd a couple years ago before he was big, and look at him now.

Chris: We’ve collaborated with a bunch of people: DJ Dan, who’s a great friend of ours, TJR. Usually we approach people we love and when we do, we’re usually already on the same page. It just kind of happens.

Me: Which artists aspire you the most?

Chris: Man, there are just so many I wouldn’t know where to start. Michael Jackson, Daft Punk, Jamiroquai.

David: Yes, Jamiroquai for me for sure.

Me: So what has inspired the unique WhiteNoize sound?

Me: Is there any venue or show that stands out more than any of the others in your mind?

David: Again, there is so many. We’ve played so many places, Miami, Ibiza—

David: If you’re going to go somewhere, Ibiza is amazing, but you should go to Floripa. It’s basically the same, same nightlife, amazingly beautiful, but just no one really knows about it. And everyone there is BEAUTIFUL. There’s just beautiful people everywhere.

Chris: I would have to say Outside Lands last year in the Heineken Dome was one of my favorites. It was filled with people and it was so high energy. There was actually a 3 hour line just to get in, it was crazy.

David: Yea, it’s all about the high energy. Sometimes you don’t always get that high energy crowd, just depends on the venue and everything. Actually, a couple years ago at the I Love this City festival at shoreline, they put us on the Bass Stage. The Bass Stage?! Like come one. I think we’re opening for Borgore or something. We were just like uhhhhh what do we play?

David: We also played on a yacht party with Carl Cox and Afrojack in Miami during Utlra. That was pretty amazing.

Me: What advice would you give to aspiring and up and coming artists?

David: Don’t jump on trends. Make unique sounds. If you hear a song on the radio and try to copy that person, it’s already too late. That sound is already over. That person is already in the studio doing something else.

Chris: Follow your heart and pay your dues. Create what you love.

David: It hasn’t been announced yet, but we’re playing Ultra this year. They’re going to announce it as part of the Phase 3 lineup. We’ll be there all week playing parties in South Beach.

And as David finished his last sentence, the club owner walked over to grab them to get ready for their set.

In a world overcrowded with DJs and EDM producers just trying to make it big, it’s incredibly refreshing to find a pair like WhiteNoize, who never once strayed from who they are and the music they love to make. Both David and Chris were amazingly down-to-earth and a pleasure to talk to. I am honored to have had the chance to interview such experienced, successful artists, and I couldn’t help but be inspired by their obvious love and passion for their music, profession, and everything they have built throughout their career.