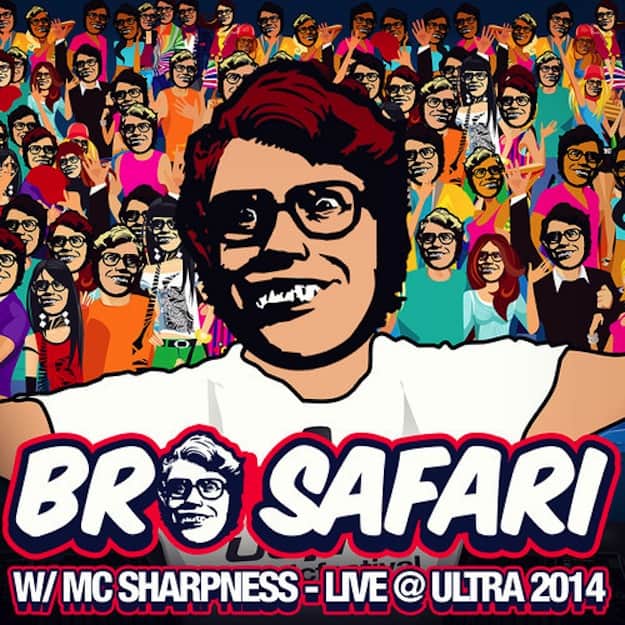 You may know Nick Weiller from his early years as a member of Evol Intent. Rooted in drum and bass, he dove head first into moombahton and trap. Today we know that side project as Bro Safari. At the time, Nick certainly did not follow a popular path. He went off the grid and left a trail.

The buzz started in 2011. Tunes like “Da Worm” landed a spot on Mad Decent's The Jeffree's collection. Slowly but surely, Bro Safari became one of the most memorable names in dance music (the name and cartoon image don't hurt either). His singles The Drop and That A$$, for example, helped propel their respective genres to an unprecedented place where hip-hop fans met the basic raver. He is among elite company to be able to play a hard, high-energy, full-length set of this style.

Midway through 2013, he grabbed Jay Sharpe, MC Sharpness, from Philly for support. Bro Safari reached new heights, joining Skrillex on his Fall Mothership Tour (during his own Animal House Tour). Meanwhile, his first full-length album “Animal” with UFO! is an homage to their originality. The EP captured a new audience from start to finish with nine unpredictable mood swings from chill-out to future hood grime.

The train has not stopped in 2014. Nick and Jay just wrapped up their Blackout Tour with CRNKN, Must Die!, and Cory Enemy (not to mention TomorrowWorld on Sunday). Two weeks ago, after their set at Insomniac's Beyond Wonderland in the Bay Area, Nick and Jay took some time to fill us in on the journey and give us some insight into the past, present, and future. First, we discussed how the two linked up.

“I noticed the trend of DJ's becoming showboats with microphones,” Nick said. “I came up in a time where DJ's did not do that shit. In drum and bass when I started, that didn't work. So it's engrained in me that I inherently don't like to get on a Microphone and talk. But at the same time, in drum and bass, emcees were an integral part of the process of playing shows.”

Born in New York and living in Philly, Sharpness is also an established veteran. When Nick asked him to check out his show in Philly a couple days before in 2013, the stars aligned.

“We've known each other for a super long time,” Jay explained. “We have the same agency. He actually reached out personally and hit me up on AIM I think it was. I knew about the Bro Safari thing but when we played together in Philly it was this crazy thing that I just walked into. We went to the next show and we've played pretty much every show since then.”

The partnership was a natural fit and Bro Safari's set began to evolve into a very unique performance.

“It helps me to focus on DJ'ing because I feel like a lot of the art of DJ'ing has been lost in recent years. It's super quick, short mixes, anthem bashing, this and that. I'm way more into the craft that goes into building a set and giving a unique experience for the crowd.”

Jay added, “The cool thing that I like about playing with Nick is he's really is into his craft. He's serious about building his set for the crowd and really working it and honing it in. That's the cool thing that I've found up to this point is we're always trying to push the envelope and figure out what works best, what is going to be a good presentation to the crowd and to the fans.”

“But meanwhile,” Nick added, “stay true to ourselves.”

The relationship LED to some great experiences like playing with Skrillex for a few weeks on his Mothership Tour.

“It was the most inspiring couple weeks of my life honestly as an artist,” Nick said. “He's put on this pedestal and for good reason because he's unbelievably talented. He would have his studio at every venue set up and CDJ's at every venue set up so it was nonstop hanging out. It really gave me a good perspective. It actually happened so I did those dates with him in between Animal House tour dates. So I was doing my own tour and had some time off and I did those dates with him and then came back to my tour. When I came back to my tour, I had this refreshed perspective on everything. I can't say enough good things about him. It was great.”

As Bro Safari grew, Jack U formed during the same time frame and started to push moombahton and trap (meshed with reggae and dubstep) to an even wider audience in a new form. Nick discussed the evolution of trap and where that might be going in relation to all of the new creation.

“At this point I don't think it's healthy to think about that because the “EDM bubble” is as big as its gonna get. Or maybe not. I could be wrong. I hope I'm wrong. But I feel like it's gone to this point where genres have bled into each other so much that it's time to just stop talking about it and every artist needs to just make what they're gonna make and that's them. We need to ease back in to just having more individuality within the dance music scene.”

He added, “I don't think about it anymore. If I make a tune with 808 drums, if you wanna call it trap, that's fine, whatever. Doesn't matter.”

Born in Italy, raised in Atlanta, and now a grounded resident of Austin, Texas, Nick has a diverse background and so are his music tastes. He's mentioned before that he likes to listen to “sad” music outside of his usual scene and we asked him about that.

“That's kind of a generalization but I like heavily melodic, layered music. Radiohead is my favorite. Thom Yorke is the best songwriter of our generation and I will never back down from that statement. But at the same time, I came up on listening to Easy E and NWA so you have to keep an open mind. I don't know.”

Inspired by growing up on punk rock, his tattoos pay some tribute to a few of the greats. A mother tattoo on his right arm was inspired by Danzig, The Misfits (his album artwork sometimes reflects their fonts and styles), and his mother, of course. It's hard-pressed to find someone with cooler, more detailed ink in the electronic scene, either. He credits Austin tattoo artist Steve Byrne at Rock Of Ages in Austin.

“I feel like it's gone to this point where genres have bled into each other so much that it's time to just stop talking about it and every artist needs to just make what they're gonna make and that's them. We need to ease back in to just having more individuality within the dance music scene.”

With a balance of musical tastes, Nick's background has found a nice home in dance music that stands out and challenges an evolving audience. So what's next?

“I've been waiting for studio time for so long. The last year and a half to two years has been just a whirlwind of just dates. Gig after gig after gig. I have a family at home so when I get home I don't necessarily get to just jump into the studio and write music. So I put my foot down and demanded some time off from my manager, my agents. I've got October, November completely open. I have no definitive plans except to just get in my studio and work on music and make whatever the hell I want to make. And then work out in the gym.

I want to finish a solo EP, do more work with UFO. Get Sharpness on a tune. I want to work with the homies and just work on some solo stuff.”

The Bro Safari team is truly a tight-knit family, literally on and off the road. Jay talked about having a baby this year and how Nick's experience over the past few years helped him prepare.

“It's great, his kids three. Mine's seven months so for me it's a bit fresher but it definitely fine tunes your focus when you're on the road. It puts things into perspective quickly and makes you realize what's important pretty fast. It also creates a great dichotomy to your life. You get to go home and enjoy the family life with your girl, your kid. You really get that quality home time. When you're home, you're home.

We're not doing that nine to five. Full time daddies. It makes it awesome when you're out on the road because it makes it worth your while when you go back. That makes it easier to travel with Nick, too. We're both on the same level, we both understand.”

Nick added that his family life has given him a sense of balance that gives him motivation on the road. Jay had his first child during their Animal House Tour, and his guidance and support strengthened their bond during a whirlwind year.

“We had a lot of overlap in anticipation for his where i was giving him feedback on what was going on at my house. It's been a beautiful process,” he said. “You really have something to look forward to when you go home. I feel bad sometimes for the older guys that are in this that don't have the families to go home to look forward to. I'll be honest. If I didn't have that to go home to, I'd be pretty fucking depressed. Having a kid just puts you in a hunter gatherer mode. You want to provide, you want to leave a legacy behind. This and that. Having my son is absolutely a definitive point in my life. Everything I'm doing right now would not be happening right now if it weren't for him.”

Jay discussed the time leading up to their first tour last year and his experience thus far.

“Before I started I was doing music and stuff like that but right when I started working with him, my girl got pregnant not long after. It was just the whole time we were on the Animal House tour and stuff like that it was just crazy to be coming home on the little breaks and seeing that whole process go. Like Nick was saying, I was drilling Nick and anybody else that had a kid for advice and it helped out immensely when the kid did come. Love you Rowan, love you Chelsea.”

Nick added, “Love you Elliot. Love you Heather…Love you Faith. Love you Hannah. Love you Belle. I got mad kids.”

EDMsauce.com Artist of the Week: The Ambient Society

What is going on EDMsauce fans? We hope you are transitioning into the fall months nicely – today, we have a great addition to...