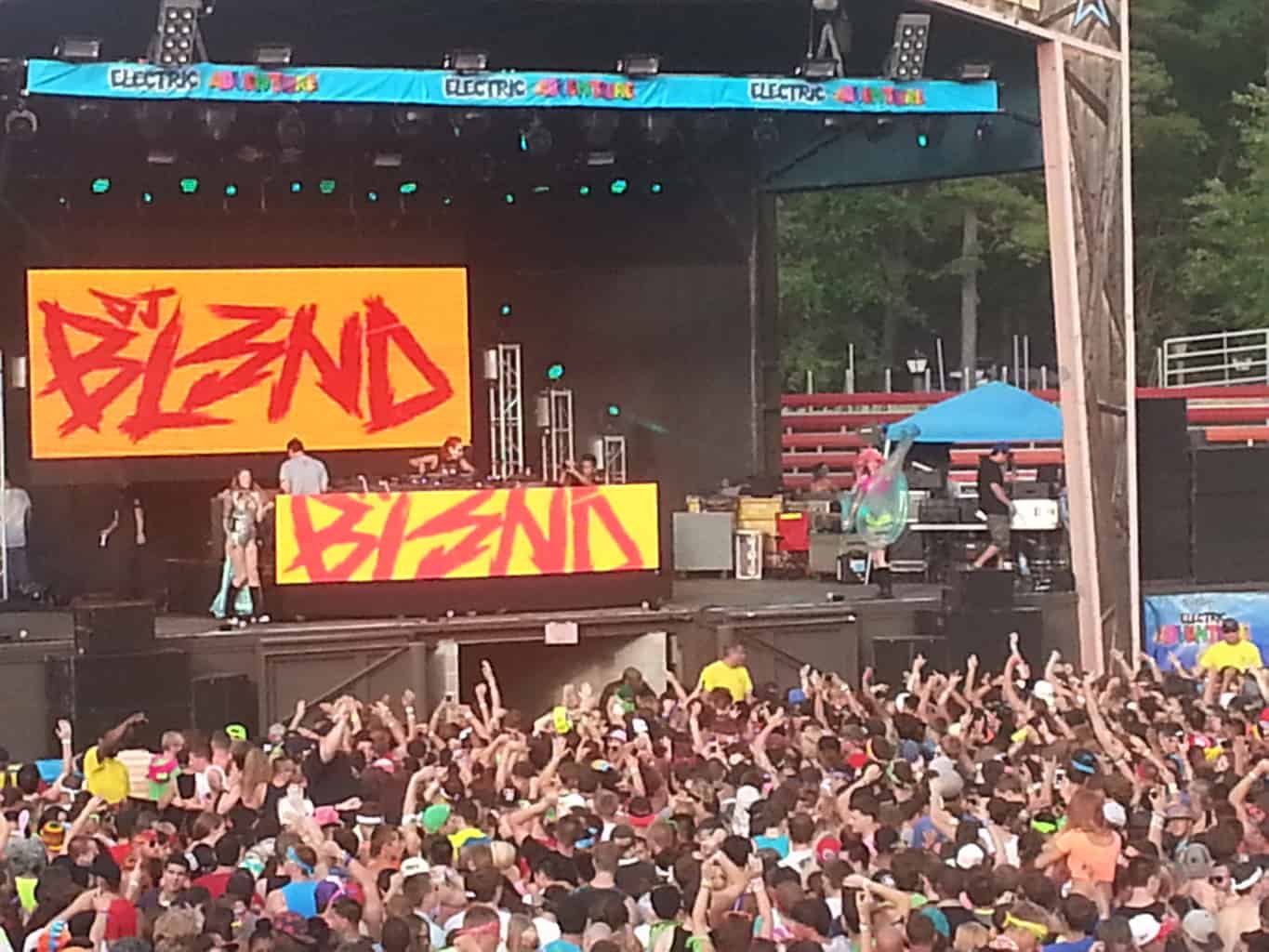 A few weekends ago, Edmsauce.com got to check out the second annual “Electric Adventure” an amusement park electronic themed day, which took place at Six Flags Great Adventure in Jackson, NJ. Featuring artist performances from Dillion Francis, Destroid, 12th Planet, Morgan Page and more, along with the chance to enjoy one the highest rated amusement parks in the country made tickets to the two day festival of sorts a great value to those wishing to linger in summer festie mode a little longer.

Pulling into the parking lot you could already see them; a merry mix of costumed, glittered, neon-ed out EDM fans ready to rage, and the confused regular park attendees, unsure what was really going on there that day. After being ushered around the park to the venue where the music had started we instantly got a feel for what the day would be like. The stage area sat at the bottom of an arena like venue, with people dancing throughout the stone seating area and a pit-like area in front of the stage held the majority of the crowd bumping and jumping and head banging along.

The crowd, a mix of those last minute festival lingerers, and underage first time ravers who may have been too young to have gone to any other show or festival before, varied from completely decked out batgirls and wonder women, to fathers and mothers looking as if they just stepped off the tram and got lost in there. The bangs of artist after artist echoed and bounced across the stone walls of the arena making the sound amplify as if we were seeing the show in a venue ten times the size.

Acts like DJ Bl3nd and Dillion Francis also wowed the crowd with stunning and humorous visuals. Having been the first time either myself or photographer Kristina Kauffman had seen Dj Bl3nd we didn't really know what to expect, but the second his visuals and sound came on we could see he was right up our alley. As horror movie nerds we geeked when scenes from “The Shining”, “Child's Play”, and “House of a Thousand Corpses” whirled across the screen with equally dark and gritty music to accompany them. With energy through the roof and a complete understanding of what to do and when, Bl3nd easily won the crowd. Dillion Francis also killed it with his signature humorous style or sick beats, obscure and often strange, but always hilarious graphics, and boundary pushing exclamations to the crowd. An over hanging thought the whole day was that maybe some of the DJ's had been toned down due to the young age of many attendees and the show being held on family-friendly Six Flags grounds. Dillion Francis blew all that talk out of the water coming right out with a “What's up M#$%&R F%$@*RS?” and throwing done his signature “I.D.G.A.F.O.S” style. Francis showcased his own style and flair through videos of his face on other people's bodies, and cat tacos with “EDM” scrolled across the side. Dillion Francis is best experienced live and he did not disappoint this time either.

While the music hammered through the park long into the night, and happy little ravers could be seen on rollercoasters and flumes and swings, you got a sense that this cute little festival was like a hidden gem, maybe not as raucous and life changing as Electric Forest or Camp Bisco, but a great way to see some of your favorite acts for a shorter drive and half the price, and the perfect way to let your little brother or sister get a taste of what the EDM scene has to offer.