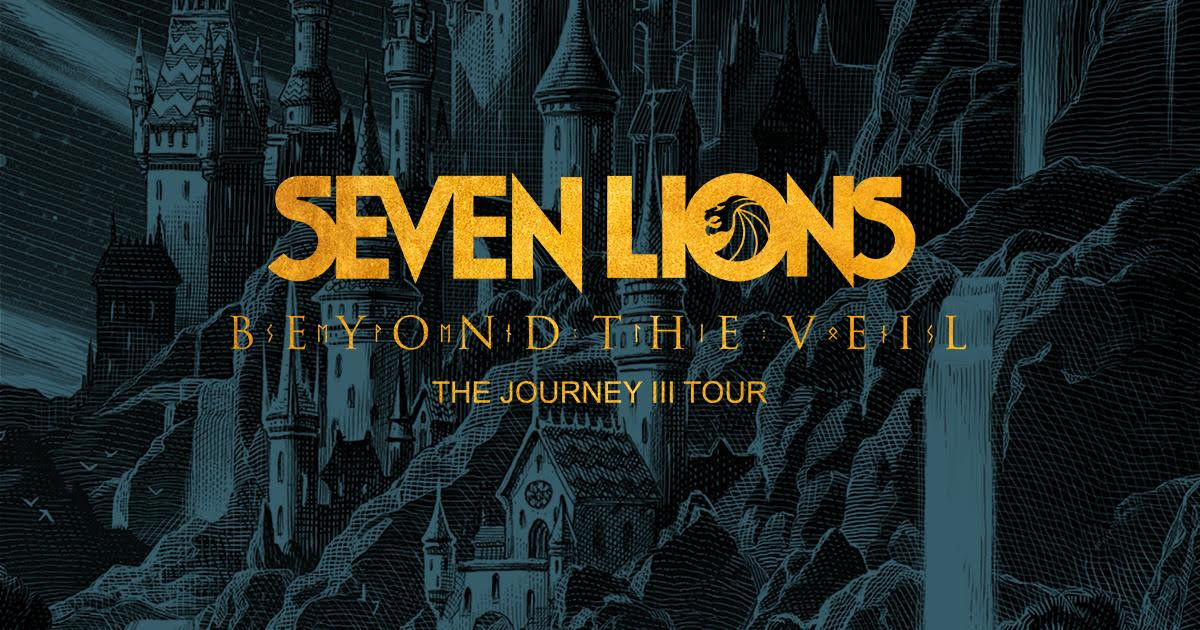 Today, DJ, record producer, and instrumentalist Seven Lions announces Beyond the Veil – The Journey III Tour in support of his first studio album, Beyond the Veil, which was released October 21, 2022. Produced by Live Nation, the 38-date tour kicks off on Saturday, April 1st at Tacoma Dome in Tacoma, WA ahead of making stops across North America in Los Angeles, CA, Austin, TX,  Philadelphia, PA, Toronto, ON, Las Vegas, NV and more before wrapping up in Berkeley, CA at The Greek Theatre at UC Berkeley on Friday, June 16th.

Beyond the Veil includes twelve original tracks that challenge and evolve the current melodic bass and dubstep sound that Seven Lions helped pioneer. Artists such as Lights and Vancouver Sleep Clinic, as well as dance music singer/songwriters Mija, GG Magree, and JT Roach are featured on the record, which delves into dance-pop, downtempo, acoustic, house, ambient, and cross-genre territory.

Seven Lions has been teasing Beyond the Veil tracks at festival headline performances this past year, during his 2021 tour and at standout performances at Red Rocks and his music festival Chronicles at the Gorge.

BEYOND THE VEIL – THE JOURNEY III TOUR DATES:

Fri May 12 – Philadelphia, PA – The Fillmore

Producer Seven Lions has never had a problem breaking rules and transcending musical boundaries to satisfy his creative vision. Catching his break after winning a Beatport remix contest in 2012 with his dubstep-focused version of Above & Beyond’s “You Got to Go”, Seven Lions, born Jeff Montalvo, garnered support from the likes of Anjunabeats, Casablanca Records, OWSLA, Viper Recordings, Republic Records, and Monstercat over the past nine years. After a decade of music, Seven Lions released his first ever album ‘Beyond The Veil' to the excitement of the wider dance music scene. The album includes twelve solo original tracks that challenge and evolve the current melodic bass and dubstep sound that he helped pioneer. Massive crossover stars Lights and Vancouver Sleep Clinic as well as dance music singer/songwriters Mija, GG Magree and JT Roach are featured on the record, which delves into dance pop, downtempo, acoustic, house, ambient and cross-genre territory.

Seven Lions has been busy teasing the album tracks at countless festival headlines this past year, his 2021 tour and standout performances at Red Rocks and his own music festival Chronicles at the Gorge. Putting technical production prowess to work in a soulful, deep, hybridized creations that all distinctly his own, the multi-talented musician is changing the sonic landscape for future generations to come by bridging the gap between the soaring, ethereal vibe of trance and intensely adrenalizing bass music. His productions have seen stages at world-renowned festivals such as Ultra Music Festival, Electric Daisy Carnival (New York and Las Vegas), Electric Forest, Electric Zoo, South by Southwest, and HARD.

In this article:feature, featured, seven lions