Blackburner is a Los Angeles, California based Electronic Dance Music group and consists of the metal guitarist and vocalist, Skyla Talon. Blackburner is known for their aggressive dubstep and glitch hop vibes. Read on for an exclusive interview.

EDM Sauce: For those of the EDM Sauce fans who aren't familiar with Blackburner, tell us a bit about yourselves and your style:

We are evil alien bunnies brought together in late 2011. We live in the world of Electronic music. Our third album “Drop Bass Not Bombs” will be released Feb 26th.

EDM Sauce: How did you integrate from being a metal guitarist to the Electronic Music scene?

I’ve always appreciated electronic music and I have been a big fan of it growing up. I started producing electronic music due to all the down time while touring and the time off I had in between tours. It was just convenient. Not dealing with flaky band members made it easier for me to be pulled in this direction.

EDM Sauce: Tell us a little bit about your upcoming EP ‘Drop Bass Not Bombs' and what were your inspirations?

For this album we went for the feeling we got from our debut album. We went for bigger drops and added energy to this album. The album title says it all.

EDM Sauce: It seems that a lot of work goes into your on-stage performance, what is something you would say is your signature that no one else does?

We’ve always loved the energy in the performances of Rock and Metal. Blackburner is a visual band. Our wardrobe is far from the norm and there is a lot of spontaneity in our shows. Sometimes we’ll pull out our cryo guns and blast some people in the crowd, next we might dive right in there and hope we can make it back to the stage. We are constantly pushing the envelope.

EDM Sauce: Tell us a bit of who is behind Blackburner, what is something you always have to have with you on tour?

Blackburner consists of myself, Skyla Talon and Spled. We met a while back at house party and days later we were sending files back and forth working on ideas. On tour the one thing we need is a bottle of something for inspiration.

EDM Sauce: Who is your favorite non EDM Artist?

Wow, we could never have just one. Anything from Neil Diamond to Deftones to Motley Crue to Taylor Swift. We love it all!

EDM Sauce: What do you do in your free time when you're not producing music or on tour?

We like getting out of the studio and checking out new artists here in Hollywood or just relaxing with a drink or two.

EDM Sauce: If you weren't DJing, what would you be doing?

Always something in the music world!

Advertisement. Scroll to continue reading.
In this article:Blackburner 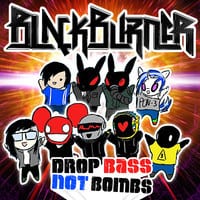 A new track by Blackburner was just released with the vocals of Andy Clayton. This dubstep track labeled “Anxiety” is labeled rightfully so with...