A decade ago, the EDM bubble was growing. It definitely hadn't burst, but it was on the verge of explosion. If you had blown a bubble out of chewing gum with your mouth, EDM would be the nearly transparent surface of that gum, millimeters from your nose ready to unhinge from the threads holding its shape with the next burst of air. It was when EVERYONE was a DJ and it was a glorious time.

It was also around that time that some of today's longest-running EDM-focused radio shows and podcasts were starting up. The list was small, but it was something new. Very few artists dared to even toy with the idea of producing a radio show without knowing the size of their audience, let alone broadcast it to the world.

Fast-forward to today where EVERYONE has a radio show. In a saturated market, with not only artists showcasing their broadcasting abilities, but also regular joes with internet access, it is difficult to stand out from the crowd.

Enter Andrew Rayel. The hottest name to come out of the trance music scene in the last five years, Rayel has captivated audiences with his high-energy live sets and melodic music productions. In 2014, Rayel jumped on that radio show bandwagon with Find Your Harmony. He set himself apart by combining the latest in trance music with the same intensity heard at his festival sets.

In September, Rayel founded his record label, inHARMONY Music, which has produced tracks from names like David Gravell, Mark Sixma, and i_o. One of those releases, “Trance Reborn” with David Gravell, happens to be the anthem for his 100th episode celebration of the radio show he started in 2014. The centennial came with not one, but TWO sold-out shows— one in his home country of Moldova, and the other in Los Angeles.

It is at the Los Angeles show, which was held inside the newly remodeled Academy Nightclub, where we caught up with Andrew Rayel and chatted on not only about the festivities but also on the success of his record label. The sold-out event saw the venue packed to capacity the entire night and included a live performance from Haliene, who partnered with Rayel in “In The Dark”, which debuted that night.

Andrew Rayel and Haliene performing their single, ‘In The Dark'. Photo: Alex Varsa.

Q: You're celebrating 100 episodes of Find Your Harmony Radio. Congratulations! You started celebrating in your home country of Moldova, how was that?

A: It was absolutely incredible! We sold out the venue and we broadcast it live so fans around the world could celebrate with us. I wanted to celebrate in Moldova because it's where everything started for me. A big part of my team is also from Moldova so it was a perfect location.

Q: What made you decide on Los Angeles as the second spot for your celebration?

A: I have a lot of fans here in L.A. and I felt like it would be a great place to get as many of my fans to join me. Also, we had a lot of help from Insomniac and they're based here. They have this great club here and it was another perfect location with a perfect partnership.

Q: Talk to me about that partnership with Insomniac Events. I know you were just in Las Vegas last week and played during EDC Week, even though you did not play the actual festival this year.

A: This year I was part of EDC week and I played one of the official parties at Marquee Day Club. I did not play the festival this year, but I have played plenty of EDC's in the past. Every artist needs a break from the festival because if you play every year, you burn out and you don't give yourself a chance to grow. Insomniac does a great Job of always keeping their lineups fresh and bring in new names to make unique experiences.

Q: Were you still able to feel some of that EDC energy even though you weren't at the festival?

A: Absolutely! Actually, some of my colleagues sent me a few videos of Armin van Buuren when he played one of my tracks during his set. I definitely felt like I was there.

Q: Explain to me how tonight's show will be different than a typical Andrew Rayel show.

A: Find Your Harmony has plenty of tracks from my record label because its what I am going to show to my fans. Its different from what I normally play at a festival, which is more big room sounds. This is more trance, very pure and melodic, very deep. No commercial stuff and plenty of IDs from the label.

Q: Speaking of your record label, inHARMONY Music, you're now half a year in— has it been difficult or easier than expected to handle your own label?

A: Way better! In the beginning, I thought it would be really hard to find demos and tracks and that's why I launched and prepared a bunch of tracks for the debut of the label. It didn't even take a month and I had already signed tracks for three months. We are now booked until September.

It's funny because I'm a pretty open guy so it was hard for me to pick and choose what tracks we're going to be promoting. Every time I called into Armada, they would help me out in filtering the tracks. I would end up sending them 30 tracks and they're like, “hold on, let's pick the best of the best of the best.” We're promoting about 3 tracks a month and that's about as much as we can do.

Q: You stated that tonight's show would have a more euphoric trance sound. Is that what we can expect your music to sound like from now on?

A: Always! I've never actually gone away from those sounds. I was inspired by different things last year that caused me to try different things with my music. I want to keep FYH sounds very unique and separate from my other shows, so I will always continue to produce melodic trance sounds. With FYH, I want fans to know that there will be a specific music they will hear at FYH shows that won't be the same as other shows.

Q: We're only 100 episodes in, what is your goal with Find Your Harmony Radio? Would you like it to be as big as Armin van Buuren's A State of Trance, who is nearing 1,000 episodes?

A: Obviously, I would love for the radio show to grow as big as ASOT and have a big yearly celebration in a big venue, but it's gonna take some time to get there. At this point, I just want to share all the music— not just my own, but from the label as well— with as many people as I can.

I honestly have no idea where this is going. I don't want to think about it as, “I want to reach this many episodes, or do this or that…” because that's not how things work out. Every time you want to recreate something it never happens, you just have to keep doing your own thing. I just want to go with the flow and if it grows into something huge I'll be happy to share it with everyone. If it doesn't I would have still been proud because I'm doing something I love and that my fans love too.

Andrew Rayel asking the audience to “make an A”. Photo: Alex Varsa.

Follow Andrew Rayel on social media for the latest news and new music! 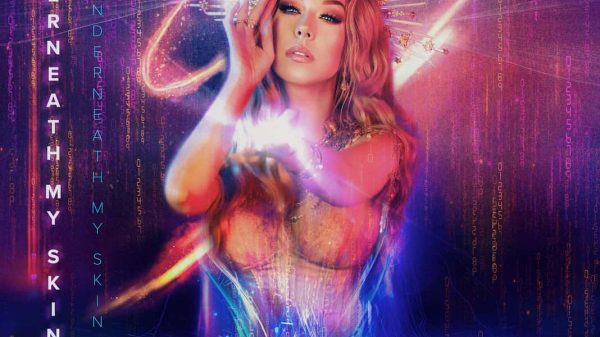