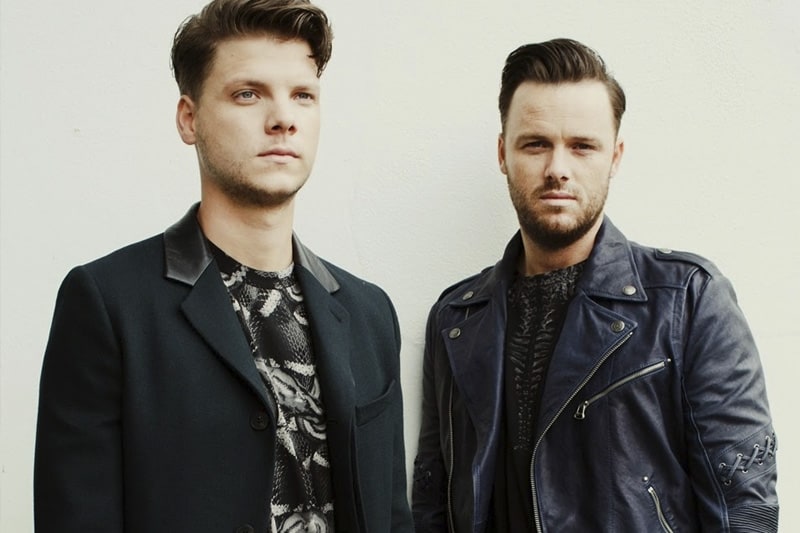 “Our favorite part is that everyone is here, all of our friends are here, were staying in Villa with Firebeatz, a lot foreign people coming by, seeing everybody drinking and being in the sun.” As DubVision and I were sitting down, we were at one of the most hottest parties at Miami Music Week, hottest by the one top music labels in the world; Spinnin’ Records’ Spinnin’ Sessions. The press room was wild because it was the peak of the party when everyone has finally arrived and everything about Miami Music Week is wild.

Victor Leicher, born in 1989 and Stephan Leicher, born in 1981, together make up the Dutch DJ and music producing Duo called DubVision. Their first release called All By Myself on the main Spinnin imprint created a huge buzz. It was played on several radio shows popular radio shows  Pete Tong's essential selection, Tiesto's Clublife, David Guetta's F*ck Me I'm Famous and Afrojack & Bobby Burns' Jacked. It wasn’t that the two brothers got their musical experience from their parents, but they were ‘forced’ to play at least one instrument for 3 years while growing up. “We learned how to play piano at a young age, like classical stuff which was actually pretty boring but it was nice.” Victor replies back saying that he like R&B and Hip/Hop and also indie rock stuff. Like I don’t really every kind of music except for like metal if yeah if it sounds good, I like it.” Now they are glad they had to, because it suits them really well. They played the piano for more then 7 years, from classic to jazz and from blues to funk. Growing up in different countries, led to musical influences from different cultures. “Actually I like to listen on my phone or my iPod not listening to house music but listening to other music because I hear it every time Im at one of these places.”

Not even realizing that they weren’t playing at Ultra Music Festival, they are still planning on going as a goer instead as a performer. “We’re not playing unfortunately, but were going there to hangout which will be pretty amazing. Ultra is the highlight of the year, and also Tomorrowland is a big one for us as well, we go every year.”

“New collabs, with also friends of ours but we can't say too much about it, so were playing our new stuff at our shows.” Wondering if they wanted to collaborate with anyone else in the Music Industry I asked them who else. “Well personal for me I would like to collaborate with Calvin Harris, or Zedd, or Alesso those are my favorite and Axwell of course, but outside of EDM probably somebody like U2, Coldplay or something different and something, we like experiment and try new and different things, we dream of one day being in the studio working with those guys.” DubVision’s newest single – Vertigo feat. Ruby Prophet is OUT NOW and as well as their Ultra 2015 Instrumental Edit of Turn It Around.

We got along the lines of talking about Ultra Music Festival, I told them which ones I’ve been to and we both witnessed Swedish House Mafia’s one last final show at Ultra 2013, “We were standing up on the VIP section, it was good. We went back stage at the end, and as soon as they came on everyone had to go. But were gonna go to Axwell’s pool party this week, probably go to Story. Our favorite nightclubs are New City Gas in Montreal, Canada, its one of my favorites too” said Victor Leicher. “But I like Vegas also, its a real party crowd, it's really nice there.”

If you could be any character whether its in a movie, TV show, video game, book, who or what would it be? “Sonic the Hedgehog!” without hesitation said Victor. We both say “SEGA!” Stephan answers saying I’ll be the fox then because he can fly.”

I was running out of time with my interview, so my final question for the dutch duo brothers, if you were lock in a room “I like where this is going already,” said Stephan, and you only had 1 song on your iPod what would it be? It could be a set if that makes it easier. Stephan the older brother replies “Michael Jackson – Bad, old school!” and Victor decides on Coldplay – Sky Full of Stars. It got silence because we were all thinking about Michael Jackson and what a shame it was, I said his music lives on.

“Thats what we hope to achieve, maybe someday. As an artist we can achieve that your music lives on.”

DubVision has a passion for music that leads to mind blowing tracks and they get a lot of support at the moment from huge names. The guys live only for one thing: Getting a crowd totally jacked-up on their tunes, and they always do every time DuVision performs. Remember the name, cause you’ll be hearing it a lot!

“We feel that music has always been our number one”

Check out their own personal experience at Miami Music Week! By watching the video below!