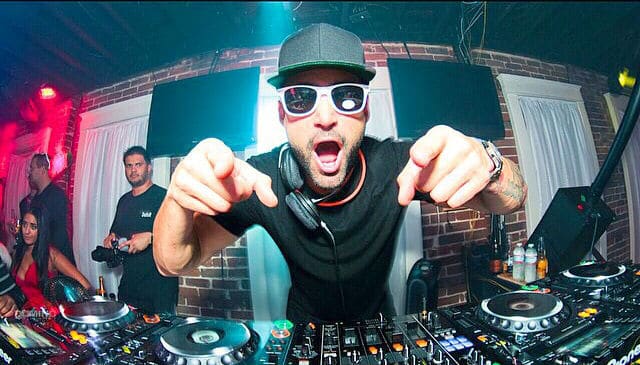 A few weeks ago, I got the chance to sit down with the sensational Michael Woods, making his second appearance at Pacha New York City. After first breaking onto the scene, as a then teenager, with 2000’s top 20 UK hit Warrior, going on to produce Example’s only UK #1 & 1.5 million selling single Changed The Way You Kiss Me and holding down a residency at world-renown Las Vegas nightclub Hakkasan, Woods is a well and truly established force to be reckoned with. Celebrating his residency at the SLS Hotel is Las Vegas, he recently dropped a new song called Tequila Nights.

From an early age, Woods has prided himself on standing apart from the crowd. He is the son of a music teacher, the U.K.-born Woods was classically trained in a variety of instruments ranging from piano to percussion, and as a youth he even performed briefly with the London Symphony Orchestra. The experience this musicality has brought now sets his productions apart and gives him an edge on contemporaries.

With new material already in the bag, including his forthcoming releases on dance powerhouse Spinnin Records, the now US based Woods is poised to have a major impact on both sides of the Atlantic for years to come.

In this exciting interview we spoke about the new direction in how EDM is making its turn to different genres, and his residency in Vegas. Heres is what Michael Woods had to say.

Being from the UK, you played at Story in Miami the other night, and you're playing at Pacha tonight, what is your favorite city/nightclub to perform at and why?

“You know thats a really tough question to answer, I play all over the world. I guess the place that stands out the most is New York City, L.A. is great too the crowd is always awesome. Of course Vegas because I actually live there now.”

“It was because of the new residency in Vegas which is at the SLS, so I'm really excited about that and we try to find ideas to promote the Night when making records so the folks that are making records thought I wasn't making records specifically for that residency so I thought being in Vegas were in the city of sin you what I mean about what happens there, you know I drink a lot and I drink only Tequila so why don't we call it Tequila Nights, so thats quite an appropriate name for that. So its actually a record I made to specifically for sets not really for release but why don't we just release this as a track to kind of to celebrate the fact that I got the residency so yeah it comes out being released on Armada on February 2nd, so I'm looking forward to that.”

Michael Woods remix of Roni Size “Doing It For The Masses”, What inspired you to remix that song?

“Oh Yeah! well thats for Roni Size, yeah because he's like a legend especially in the UK, so he's like drum and bass and I kinda grew up listening to his music so when he approached me and asked me to do a remix, I was like WOW! I love your stuff, so I was like starstruck for a little bit and I heard the track, the track sounded so original and fresh sounding I was WOW I’ve got to jump on this so I spent a week just towing with different ideas and stuff and I came up with I thought is pretty good. So yeah and he absolutely loves the remix, I can’t wait till it comes out actually, they’re releasing it in February of this year so Im looking forward to that one. Ron Size is like a drum and bass legend, so for me its kinda cool to do a remix for him. Actually he remixed one for me as well so I got a track coming out with vocalist Sam Obernik and the track is called Get Around. Theres a Roni Size for that one too which is mind-blowing. So I’m really looking forward to that one. Hopefully we will release that one around Winter Music Conference at the end of March.”

“I would love to a collaboration with Ne-Yo actually, because I did a session with him we were writing for Shakira so we had a writing session studio and we came up with this track together and we altered the music a little bit in the booth to sing the vocals, and while I was listening to it, I was like DAMN this guy is good and he came up with the vocals and lyrics he literally sat there for 10 minutes and then went into the room and man this guy is good. So I was thinking I would love to work on track with him or ask him to do a collaboration as well. Calvin Harris obviously I would love to do a collaboration with him as well, we kind of have stuff on his label and were managed by the same people, Im always going to be trying to push, yeah you know 2015 could be the year. Also Example, have you heard of Example? He's a big UK act, I did a track with him before called Changed The Way You Kissed Me it was number 1 in the UK for two weeks, so he's a really solid singer/song writer so I would love to do something with him.”

“I feel that people always try to reach out you know to new music, I think here in the states EDM kinda like blew up about five or six years so naturally you know what else is out there? People of kind the deep house thing is what people seem to be latching onto, because what people consider “Deep House” I don’t actually consider it to be deep house, I’ve heard it, I know what deep house sounds like, something that sounds deep house its just like “house” but just not that EDM sound. I like it, its good music, you know I’ll just go for house, deep house music night, and I just really enjoy it.”

What are you most excited about what holds this year in 2015?

“I’m looking to try and expand because I have a Record Label Diffused so Im still trying to rank up this year and take a little step back from that, and trying to find some new sounds some new styles to really push and get behind so we doubled the backend stuff and the label, management, and focus more on getting good tunes out to rank up this year so look out for releases on Diffused Music and playing stuff as well. Were looking to do a deal with Armanda  gonna be looking on the backend stuff and helping to promote releases thats going to be quite big for me this year.”

Last question, what inspired you to make such an awesome song like Platinum Chains?

Michael Woods, laughs; and says “I remember writing it on the plane actually, I write a lot stuff when I’m on the plane I just came up with that cord thing that da-da-dee-da and I tried on the piano and it sounded completely different and just took it into the studio and it just worked and I released it to Calvin Harris and he loved it too and it was on his label Fly High and he was playing it at every single set and it blew up in that way too.”

After the interview, I saw Michael Woods perform his new Tequila Nights song, where started jumping up to his booth asking for shots of Tequila he was more than delighted to share with his fans. The people loved his amazing set, I can't wait for more releases to come in the near future.

You can listen to Tequila Nights in his latest episode of Diffused Music With Michael Woods below!