25 Electronic Producers That Bring Back The 80's
Advertisement 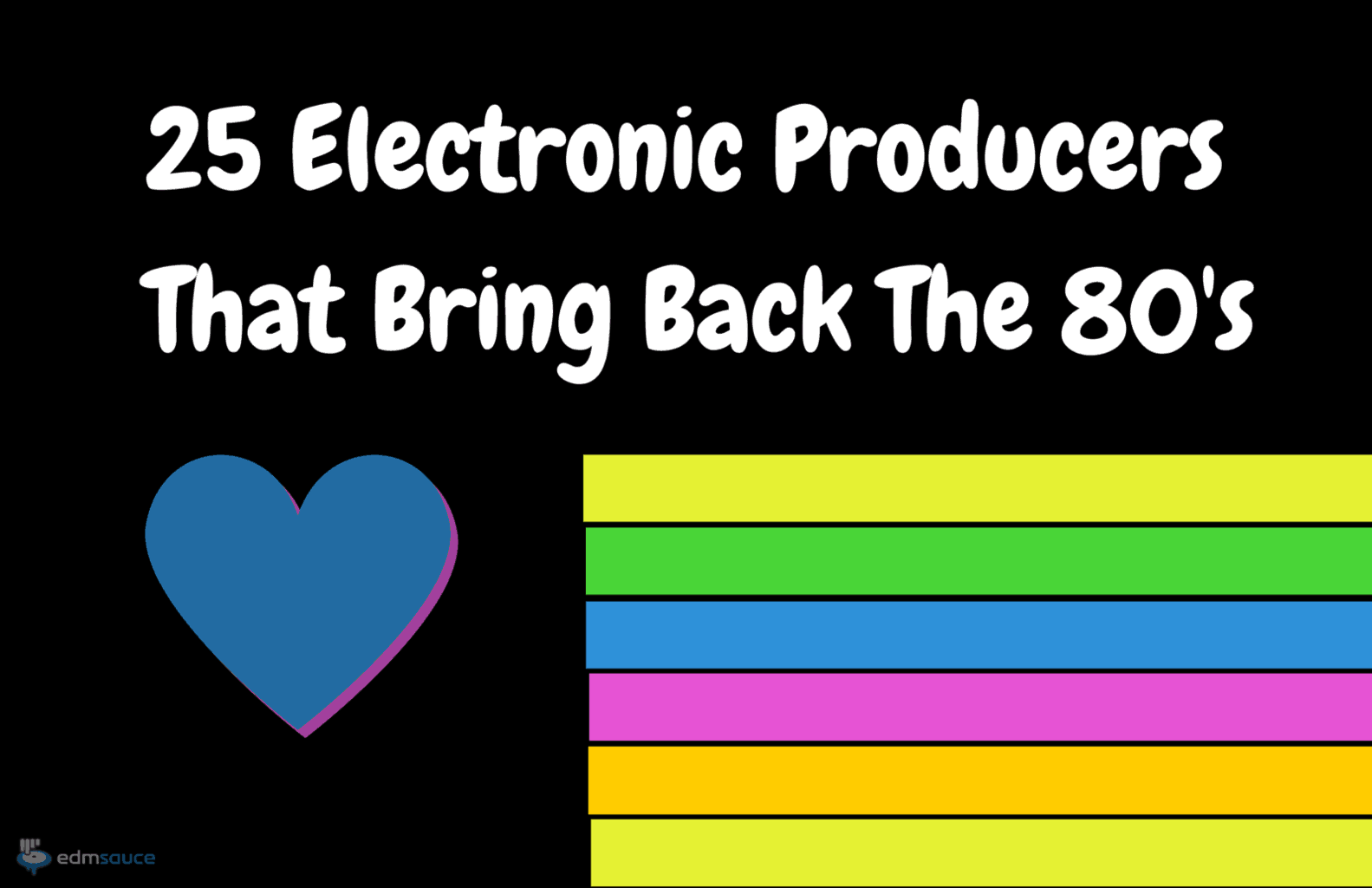 Go “back to the future” with some of the best electronic artists who are producing some of the same sounds we know and love from the eighties with a modern touch. Below is a comprehensive list of 25 unique artists that bring back the '80s!

This list is ordered generally by popularity with a few exceptions (Soundcloud or Facebook likes). There are other artists out there who have qualities of eighties style (like Savoy, Neon Indian, and other nu-disco artists) but this list focuses on the ones who embrace all things eighties and dive into the time machine head first.

Related: Synthpop: These Are The 10 Best Synthpop Songs

French producer Vincent Belorgey started the project Kavinsky (often spelled KΔVINϟKY) in 2005 with a unique style that sprung from a love of emulating tracks from his favorite films. With production help from Guy-Manuel de Homem-Christo (half of Daft Punk), he broke out in 2012 with the production of the single “Nightcall” (featuring Lovefoxxx) to critical acclaim on his first full-length album called Outrun. This became a hit for the movie Drive starring Ryan Gosling. He's also been featured in video games like Grand Theft Auto and Gran Turismo.

New Jersey native Seth Haley has an infectious synth-wave style that truly gives the eighties a modern twist. Check out “Idle Withdrawal.”  This tune could easily be mistaken for a remastered track from another era. A member of the Ghostly International roster, Truise's sound continues to evolve and embrace a rare mix of chill wave and nostalgia.

Johnny Jewel is the guy behind most of your favorite eighties-style electronic production, especially in film. As a member of the electronic band Desire (with Megan Louise and Nat Walker), he produced “Under Your Spell,” an iconic track featured in the movie Drive. After the film's success, Ryan Gosling recruited him to score his first film as a director, Lost River (2014). Jewel is also a member of Glass Candy and Chromatics, both highly influential electronic bands. Glass Candy is a duo project with singer Ida No and Chromatics is Jewel, Ruth Radelet, Adam Miller, and Nat Walker. Jewel's well-known Record Label is called Italians Do It Better.

Feel-good, synth-wave EDM really shines with the experimental duo “Classixx,” a Los Angeles-based act that has refined their music since beginning in 2005. Their “poolside electro” doesn't rely on mainstream drops with a style that's uplifting and inspiring. Check out tunes like “All You're Waiting For” featuring Nancy Whang.

Swedish producer Mitch Murder takes his listeners into an eighties time machine. It would be easy to mistake his track “In The News” for a song from the era. You won't find anyone else in EDM using samples from a Ronald Reagan speech. Mitch Murder is a must-follow artist for eighties-style electronica.

Laurent Ash (LIFELIKE) is one of the best nu disco, Synth wave producers in the game. Despite ties to Daft Punk and Justice, his retro sound uses various instruments and melodies that capture the eighties with unmistakable familiarity. Recently, he did a cool remix of one of Mitch Murder's tracks called “The Touch.”

College is a “retro-future” electro project by Composer David Grellier who admits his vision was “to synthesize into my music the emotions of my childhood” including “'80's soaps.” Grellier released his first album as College in 2008 titled, “Secret Diary.” Alongside Electric Youth, he was also a pivotal part of the success of the movie “Drive” directed by Nicholas Winding Refn. Today, his focus is on the music collective called “Valerie” which is based on “a romantic blend of 1980's style electro.” Check out College's latest single “Save The Day” featuring Nola Wren which was released in November.

Canadians Austin Garrick and singer Bronwyn Griffin Make Up the electronic synth-pop band Electric Youth and they've also been dating since the eighth grade. Another example of the power of eighties themed music in the movie “Drive,” their song “A Real Hero” (with College) was named one of the 20 Best Songs of 2011 by Spin Magazine and received critical acclaim. Last year, they released their first full-length album called “Innerworld” which featured “A Real Hero” and other previously released tracks.

Mattel released a “Power Glove” in 1989 as a control accessory for Nintendo and surely its creation inspired the name of this next act. The Australian-based production duo has a very high-energy style that's much more upbeat and in-your-face. Their first single release, “Streets of 2043,” is a great example of Power Glove's ability to make old video game sounds mesh with “old school” experimental electro.

Futurecop! is self-described “dreamy electronic music about nostalgia.” Manzur Iqbal and Peter Carrol started Futurecop officially in 2008 and the identity of this project seems to just be taking hold. While some tunes may be akin to lullabies, others are captivating and represent the weird uncertainty of youth. For an eighties flashback, check out “Into Your Heart” featuring Hunz & Mosaik. Make sure to also peep their website which is full of memoirs that will take you on a flashback journey of the eighties and early nineties.

Anton Sevidov started the project Tesla Boy in 2008 with the idea of creating a new wave/synth pop band. Known as as a keyboardist, he uses a vintage ROLAND-JUNO 60 synthesizer on stage during performances (released in 1982). Although he is also a vocalist and writer, Sevidov has three other band members with Leo Zatagin on bass, Mike Studnitsyn on drums, and Stan Astakhov playing guitar. Their sound has progressively become more and more synth heavy.

Victoria, Canada native Michael Glover is the mastermind behind Miami Nights of 1984 and he's truly made a modern imprint on EDM with the '80's electronic music as his mantra. His record label, Rosso Corsa, has helped other artists in this genre exclusively as well. His name is based on the original air date of Miami Vice (Sept. 28, 1984). Check out this awesome remix of Gotye's “Somebody I Used To Know.” Rolling Stone called it “a synth-led '80's redux and it's pretty rad.”

Based in Austin, Texas, Garret Hays is the producer behind the dark synth wave project Lazerhawk. His sound tends to take on the same style as Kavinsky with creepy build-ups and plucks. This is some fun driving music for a late night 80's adventure.

Producer James Kent is “Pertubator” and he makes self-described “dark and Retrofuturistic music inspired by the 80's.” Using dark synths and a creepy style, Perturbator draws inspiration from 80's horror and sci-fi movies (like Terminator we assume) and artists like Tears for Fears and Vangelis. His latest album “Dangerous Days” is straight out of an 80's sci-fi movie.

Canadian producer FM Attack (Shawn Ward) makes a romantic, dreamy type of eighties-style electro that's based in disco and “post-punk.” If you want to feel sixteen again, check out “With You Tonight” and try to act like you're still in the year 2015.

80's Stallone is the project of Chris Stallone and his epic melodies and dramatic synths could easily score an eighties film. Based in England, he has a catchy and repetitive synth wave style. Appropriate to his name, Stallone's debut album “Hotline” is perfect 80's workout music. To add variety, there's plenty of chill wave here for relaxation as well.

Visitor has one foot in the late 1980's and another in the future with a sound that resembles M83 but with a hard eighties influence, especially with drums and guitars. Check out two of the duo's latest singles like “Coming Home” and “RNB.”

Swedish producer Lost Years is a proud member of the Rosso Corsa label and draws inspiration from artists like the Pet Shop Boys. With some catchy melodies and awesome vocals, Lost Years has a nostalgic style with an edge.

Jordan Faeghi is Sydney, Australia producer Jordan F and his bio says it all: “I make 80's inspired electronic music with a modern fidelity.” The talent Aussie's most recent LP, “Slipstream,” takes us on an eighties journey and wild tempo changes that help aid the time warping with some captivating melodies.

Guitarists are already covering songs from ActRazer like “We Own The Night” because these jams are just too good. Unfortunately, the Canadian producer has been inactive for about the past year but we're hoping he comes back.

Timecop1983 takes all of the things you love about chill wave and puts them into a soothing collection of relaxing eighties melodies and beats with his latest EP “Waves.” It's not surprising that Timecop1983 uses a combination of vintage and modern equipment to get his incredible sound.

Based in Israel, Alex Karlinsky is the producer responsible for Highway Superstar and he's already busting out new tracks in 2015 with the free download “Skylines.” This is some dream wave from the early eighties that will certainly grab your attention.

Based in London, Le Cassette is the trio of singer Adam McNab, James Nalepa, and Joe Wood. Their “'80's inspired electro” is a traditional attack on making an eighties electronic powerhouse. Check out one of their latest songs “Electric Paradise” that has a neat chord progression and shows their love of weird sounds.

This British producer started just a couple years ago with a huge passion for eighties culture and the music matches the obsession. There's plenty of innocent vibes and feel-good snythpop from Sunglasses Kid that will keep you coming back for more.

ROOM8 is on fire lately after collaborating with Electric Youth on a few songs that make up their EP “Visions of You.” Based in Los Angeles, ROOM8 is the duo Ezra Reich and Nic Johns. They produced the band Kitten's debut self titled album as well which was named one of Rolling Stone's top pop albums of 2014.