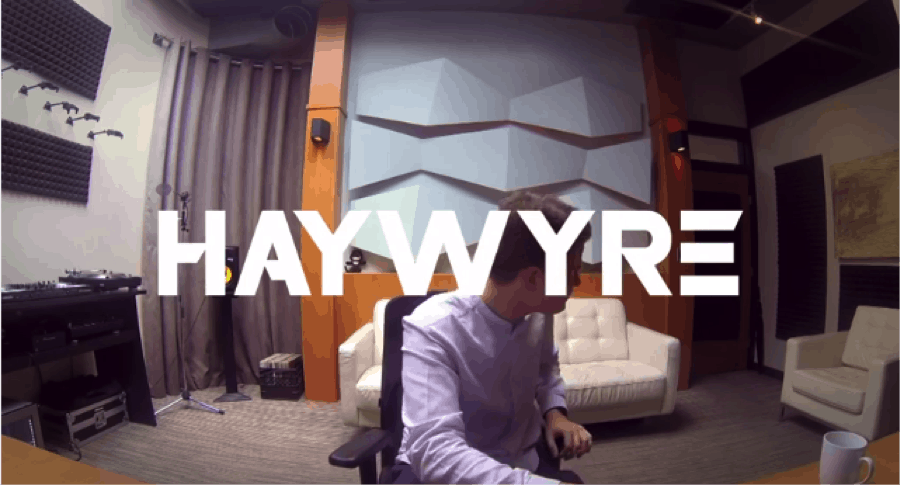 There have been a number of young producers making an impact on the summer of 2014 in electronic music, but none really compare to the mystery and impressive production of Martin Vogt, AKA Haywyre. The 21 year-old looks a bit younger than his age in pictures and in person, but his modest image and approachable, formal look only aid to the confusion when you hear and see his freakish, mind-boggling skills. His keyboard mastery recently caught our attention with an interperation of Michael Jackson's “Smooth Criminal.” See for yourself.

Accordingly, he followed up the Do Lab's Kill Paris event last week to headline at King King in Hollywood yesterday and we had a chance to catch up with him and eventually discuss his blossoming career. His funky set made a big impression on stage with a well-versed crowd in the Los Angeles electronic scene and we were thrilled to catch up with him afterwards.

1) Thanks for the time! Firstly, what's been your response like after posting that Smooth Criminal video? Coolest thing that's happened?

I loved watching the virality unfold. Seeing names like Gramatik, Soulection, Minnesota and more share the video was a pretty big motivation.

I read you were going to do more like that. What inspired you to do that and how was it filmed?

It's important to showcase what you are about as an artist. Most of my content has only showcased my productions, when electronic Music Production has only been the most recent aspect of my involvement in music. I wanted to find a way for people to understand what my performance process is like, and what better way to do it than to just record a video with a few GoPros of me performing?

2) Those chords just sound amazing and even soulful. Were you trying to go for a specific sound or is there something that you were going for in that interpretation?

I didn't have any specific goals when writing the reinterpretation. As the track started to unravel, I realized that I was heading towards something funky, both rhythmically and harmonically, but also performance heavy. I stayed away from calling it a remix as it barely has any resemblance of the original track.

3) You mentioned that it's difficult to explain where you're from. Where were you born and raised? How has your environment influenced a career in music?

I was born in Lafayetee, Indiana. From then I moved to Austria with my family and eventually came to Milwaukee several years later. I've moved around a bit more since then as well so hence the difficulty in explaining where I'm from!

Being in Austria has effected my music significantly. Getting piano lessons in a country that prides itself on being home to many classical greats was impactful and helped set my standards high…not just in a compositional sense, but in general.

4) What do you like to do when you have time to relax? Do you have any other big hobbies?

Music is a pretty all-encompassing endeavor for me. When I do take a break from listening, performing, studying and creating music, I spend a little time socializing, watching thought-provoking shows and movies.

5) How long have you been playing piano/keyboard and what do you attribute the great composing? What made you get into electronic music?

I have been studying piano performance since the age of seven. It started more as a chore than anything else although I always loved sitting down and improvising for hours on end. It wasn't until I started studying jazz and moving back to the U.S. at age 14 that I realized how intense my relationship with music was. I loved the idea of being able to translate an idea into something a little more abstract than everyday linguistic communication.

My cousin introduced me to electronic music for the first time. My first impression was relatively negative, actually. But I knew immediately that there were many facets of this newly discovered area of music that would justify the seemingly simple compositional work that I had heard from it thus far.

It took me a while to realize that electronic music, in my opinion, was focused on the quality of sound, as opposed to the arrangement of it. As I started delving more into producing this idea, it became more and more prevalent.

6) You've mentioned in the past couple years that you wanted to experiment with some outside of the box things like beat boxing. What kind of new things have you incorporated into your most recent tunes?

Most of the time they are naturally things that find their way into my workflow. I have been focusing a bit more on my sound design as opposed to the instrumental influences that I used to rely on so heavily for my music. Essentially, I have been trying to focus on understand how every aspect of every layer of every sound behaves on a much smaller timescale.

7) What has made Monstercat a nice label for you to grow on? What do you think makes you stand out?

I think Monstercat has helped me reach ears that I normally never would have reached. They have the connections to make that happen. Seeing support from Noisia, Knife Party, Kill Paris, Mat Zo, Big Gigantic and more would never have been possible in my eyes without the power of a label like that. My distinguishing factor (in my opinion) is bringing traditional music theory and piano performance knowledge into a musical realm that remains relatively untouched by it.

8) It seems like self-realization as a human has influenced a lot of your previous music. Are you a spiritual person? Have you read anything in particular that has strongly inspired your philosophy on music and creation?

I am not a very spiritual person; I'm a firm believer in agnosticism. I think more than anything, philosophy and critical thinking are large influential factors on my music. I don't pride myself in being very knowledgeable in these areas, but they are some of the most inspirational ones for the conceptual backgrounds of my tracks.

You're finishing school, talk about your goals with your education and what we can expect in the future? Do you have any other plans for 2014 where we can watch you play/tour dates? Any upcoming releases?

I plan to finish my degree in Music Business by May 2015. At that point I'm hoping to pursue my career as Haywyre full-time. Currently I don't have many planned performances but after I finish college I am planning on playing out much more than I have in the past few years. In terms of releases, all I have planned is a few singles and projects to lead into Two Fold pt. 2. When that will happen exactly is not clear, but I hope to do all of the above sooner rather than later!

In this article:haywyre, Monstercat, Smooth Criminal

Mazare has finally unveiled the full force of his debut EP Paracosm. Calling on an extensive feature list including the likes of CloudNone, Bloodhounds,...