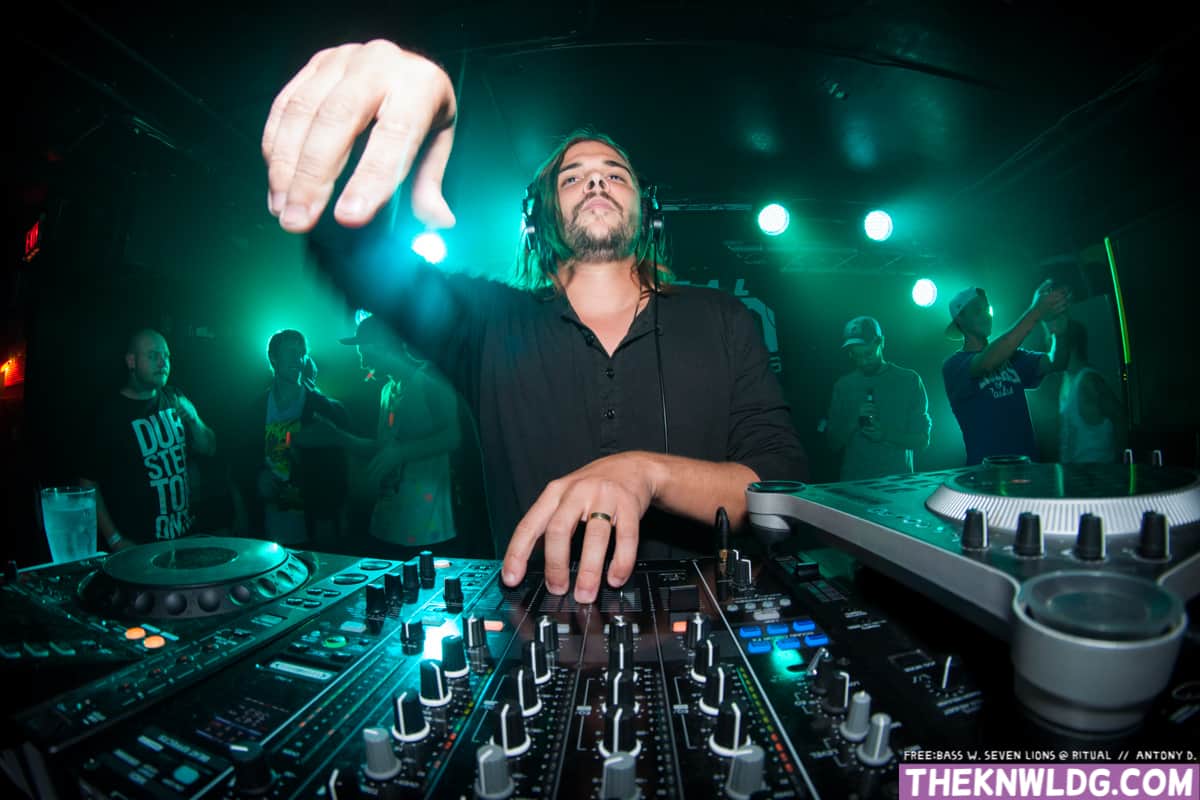 Ever since Jeff Montalvo, or ʻSeven Lionsʼ as you may know him, won the Above & Beyond remix contest in 2011 his music career has taken off and continues to rise. After touring with Krewella on their ʻGet Wet LIVE Tourʼ, Seven Lions is now making waves with his first headlining tour, ʻWorlds Apartʼ. EDM Sauce caught up with the trailblazer of melodic dubstep before his set in Philadelphia to discuss the future of his music and more.

Since the tour dates for his ʻWorlds Apartʼ tour are completely stacked, I wondered if he ever has any extra time to explore the cities he tours in.

“Well, sometimes. It depends on how late we stayed up the night before so a lot of times weʼll get to the hotel and sleep.”

With that being said, I asked if he had any pre-show rituals or anything he typically likes to do before a set.

“I just drink a few beers and chill out. Itʼs kind of the calm before the storm. I get really mellow before I play a show, to be honest, and kind of quiet just cause I focus a lot. Then Iʼll play the show and party after.”

You could tell Seven Lions really enjoys playing for his fans and feeding off of their energy. Music is clearly his passion and the crowd can definitely feel it. I asked whether he prefers smaller, more intimate venues or big festival shows.

“I prefer when youʼre close to the crowd so it doesnʼt really matter how big the venue is as long as Iʼm close enough to see the people and I can actually go out to the crowd. Itʼs got to be personal because sometimes the big venues have too much room between you and the person and it just feels a bit weird.”

With festival season fast approaching, Seven Lions said heʼs currently the most excited to play Electric Forrest. I was curious if he had any new tracks or surprises in store for his fans this festival season.

Since he has so many killer remixes working with different artists, I wanted to know which artist he was most excited to work with in the future.

“I just did a song with Ellie Goulding that Iʼm really excited about that will be on the next EP. It was supposed to come out in April but we hit some serious snags with one of the vocalists that I had on there so weʼll see when itʼs actually going to come out now.”

As I mentioned before, Seven Lions got his big break by winning the Above & Beyond remix contest for their song ʻYou Got To Goʼ. I wondered how he managed to continue his rise in fame without being a one hit wonder.

“I just kind of kept on the same track and tried to make quality music, you know, I didnʼt really change anything too much. Thereʼs not a whole lot you can do you just kinda take it as it comes and do the best that you can.”

With all of the Big Room House being released in the dance music world, I was interested in how Seven Lions saw his music evolving in 2014.

“I think Iʼm going to be doing a lot more divergent stuff. Like really dance floor oriented anthem stuff and then really weird not meant for the dance floor stuff. Thereʼs definitely a lot of big room and I understand the sound. I like the sound, I donʼt hate it, but I donʼt like the minimal stuff so much, itʼs really annoying. So if I do big room itʼs still going to be very complex and melodic, ya know.”

Advertisement. Scroll to continue reading.
In this article:seven lions