A ‘Quickie’ With The Chainsmokers, An EDM Sauce Exclusive Interview
Advertisement 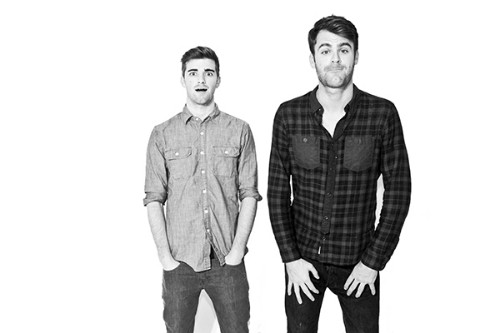 Finally,a little one on one action with Alex Pall and Drew Taggart, better known as, The Chainsmokers. Ever since they signed with record label 4AM in 2012, these fantastically talented men have had a steady run in popularity. Since their first big break with their remix of Jonsi’s ‘Around Us’ hitting #1 on Hypem, Alex and Drew have had a whirlwind of success. From performing at big venues such as LIV Miami, Marquee Las Vegas, Villa Ibiza,Opium Barcelona to performing with huge names including Steve Aoki, and Calvin Harris (to name a few), there really is no stopping these guys. It’s only January and they have already kept fans loaded up with eargasmic remixes which include ‘Habits’, ‘Pumpin Blood’, ‘Goodness Gracious’, and a preview of their new track ‘#selfie’.

Their success thus far wasn't achieved by clicking their heels three times repeating “There’s no place like the mainstage”. It has been accomplished by consistently overcoming one of the most common challenges faced by everyone, the challenge of life. “Everything nowadays is competitive doesn’t matter what you do, and we are doing our best to work as hard as possible to differentiate ourselves from other people. It’s foolish to think anyone is going to hand you anything and if they did and you don’t work hard to maintain it, it won't be yours for long…. “. A statement I’m sure rings true with many of you.

While describing their music as “sensitive and curious”, I wanted to know a little more about  how they felt their music has evolved from their first track to their newer ones.  “Well fundamentally in terms of what we love musically, nothing has changed so we always have been trying to convey the same thing through all our remixes. However, the means by which we get there has changed. Our sound is constantly evolving and that’s something we hope people realize who have always listened to us. Its not our goal to do one sound or make one style of music. Music in general and the emotions it stirs are so fleeting so remix 1 versus remix 17, it’s the same guys but times change….”.  One of the big emotion grabbers in their tracks are their amazing vocals. When trying to pick the right vocals, they usually ask themselves a couple questions. Such as “Are they good? Do they fit the song? Do they make us feel like babies are tickling our nuts? Will it make hearts melt….”, I wonder what other questions they ask themselves throughout the day.

Until now, TomorrowWorld has been one of the greatest festival experiences I’ve had so far. I wanted to know how The Chainsmokers felt about performing on the Anthem stage at TomorrowWorld, if they would do it again (silly question I know), and how different it was compared to other venues they have performed. “….that weekend was so far the best weekend of our lives…. Well the answer is simple it’s a festival… so everything is different. The scale, the energy, the expectations, its just fucking awesome…. We would do it till the day we died, with big fucking smiles on our faces….” Hopefully we will be seeing them as one of the featured artist this year at TomorrowWorld *fingers crossed*. As February 14th sneaks up on us, I was wondering what in the world will Alex and Drew be doing on Valentines Day? Will these aggessively handsome men be playing a special? Playing an event or just spending a quiet brotastic night for two? “Valentines Day is indeed a special day and we hope to be doing many romantic things, but instead we will be traveling up to Canada for a show at McGill, so we plan to bring a lot of couples together on that day and hopefully have one massive Canadian orgy…We also will be releasing a new song that day… its an original tune that is going to be in the theme of valentine's day. I would say more but a lot of it is a surprise…” Giving the gift of music on Valentines Day, how sweet. Now lets get to the ‘quickies’. If you haven’t read the ‘quickies’ and ‘fun facts’ that Alex and Drew have posted along with their songs, you are missing out. They are not only hilarious, but are one of the many ways that The Chainsmokers effortlessly connect with their fans. “We always want to try and convey who we are as much as possible, it's important to not just know our music but also connect with us on a personal level. To us growing up getting to know the ppl we looked up to was so special. Beyond that it's important to put your personal touch on things, there is so much of everything today, so the devil is in the details…. And that aside, we just like doing them….” For my last questions to Alex and Drew, I asked them if they were a sauce, what would they taste like, and what would they name it. Drew would be a spicey Drewlula sauce, while Alex would taste like maple syrup, named maple syrup. Leave it to these two to make a spicy maple syrup sauce sound tasty.

And since #selfie is coming out on January 28th, here is an exclusive EDM Sauce ‘quickie’ on their new record. “Well basically we had the idea randomly, and hit up our homegirl Alexis to come over for 20 min and try out some ideas, she came over and in no time we had two verses. To be honest, at first we were terrified by it, we couldn't tell if we had just created something genius, or a song that would guarantee our musical death. But we put it up for 2 days and it had 180k plays and only fun comments and that’s when we realized we had something bigger than we realized. So we took it down and shopped it to Dim Mak…. And vwala…”.

So far, 2014 has been filled with lots of Chainsmoker goodness. For the rest of the year, expect “Lots of original music, beef jerky sponsorships, lots of Games of thrones tweets, more video content, more hard and deep”… well… just expect more.

If you haven't already, make sure to add The Chainsmokers as artists you should look out for in 2014. And if you have enjoyed their numerous free downloads, support them on Beatport on January 28th. I know I am. But first…let me take a selfie.

In this article:#selfie, The Chainsmokers