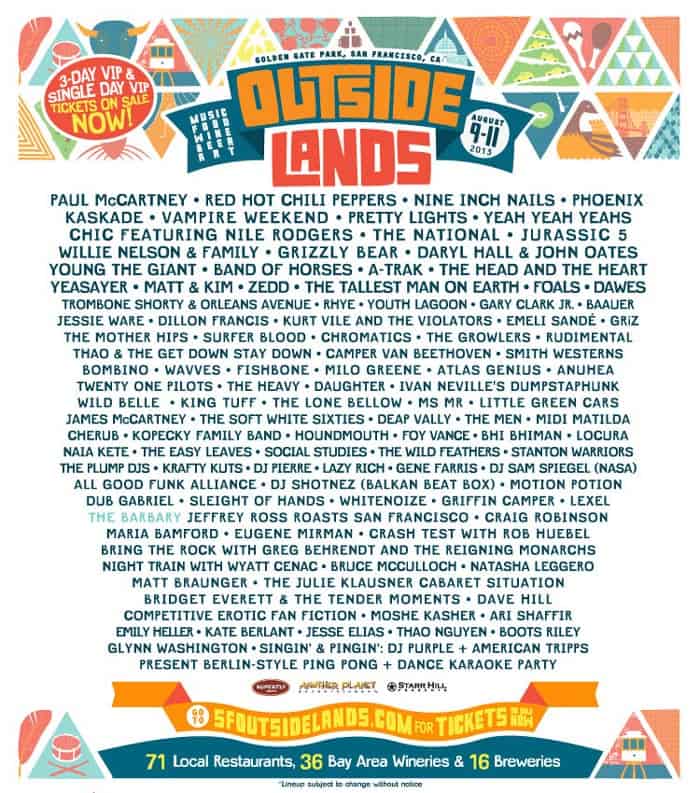 Set in one of the most picturesque cities in the nation, Outside Lands Music and Arts Festival just finished up it’s sixth year and is quickly becoming one of the go-to festivals of the year. Between the dates of August 9th and 11th, thousands of music, food, and drink lovers descended upon the lovely and vast Golden Gate park to get their fill of culture, organic eats, and of course, beats.

Starting in 2008, Outside Lands wasted no time securing must-see headliners boasting names such as Radiohead, The Black Keys, Beck, and Cold War Kids. In addition, aligning with the San Francisco vibe, the festival focused on green and eco-friendly initiatives like ride sharing, waste diversion, and solar powered stages.

As the much anticipated 3 day festival nears, you can almost feel the electricity light up the foggy city of San Francisco with excitement. Planes and carpools carrying friends from out of town begin to arrive, bottomless mimosa brunches are planned, and band schedules are made. This was my third year attending Outside Lands, and in case you have never had the privilege to attend, I will take you through my day by day, set by set experience.

Since Outside Lands still seems to remain a mostly local attended festival and a good number of people are at work on Friday, it tends to be least crowded on this day. As my friends and I walk through security and scan our passes, we arrive at the first stage and stay to catch the tail end of Jessie Ware. As we sit and gather our friends and bask in the chill vibe of the young, British singer/songwriter, we prepare for the first big set of the weekend: Zedd. Together, we parade through the mini forested Beer Lands to the back electronic stage, Twin Peaks.

One small setback to an outdoor festival/venue is the sound quality. If you don’t have a good spot, (and in this case, in front of the sound stage), the sound is spread out and hard to hear clearly. Even though we couldn’t get the best sound for Zedd, he still killed it spinning fan favorites and aware of exactly what the crowd wanted to hear. I watched jealously as the front of the audience raged to bangers like ‘Clarity,’ and I was too far out to join.

Yes, EDM is by far my favorite music genre, but no one can pass up a set by the one and only Paul McCartney. Said to be one of the best sets to ever grace the stages at Bonaroo earlier this year, everyone was super excited to see the ex-Beatle perform. Switching between his own songs and popular Beatles tunes, Paul McCartney had the entire crowd happily dancing and singing along. Lucky for me, however, he was scheduled for a 3 hour set, and I didn’t feel too bad leaving after 2 of them to venture back to the Twin Peaks stage to see one of my all-time favorites: Pretty Lights.

As always, Pretty Lights put on an amazing show. I was amazed that even playing against one of most famous musicians of all time (Paul McCartney), the funk-inspired producer still gathered a very large crowd to watch him perform. As the sun set and everyone jammed out to rockin’ tracks such as “Around the Block,” “Yellow Bird,” and my personal favorite, “I Know the Truth,” my friends and I worked our way up to the front and let the beat take us over.

Of course, my set of crazy friends begin planning for this event months in advance, and it wouldn’t be a true Outside Lands experience without a bottomless mimosa brunch. So, our Saturday started out aggressive with unlimited champagne and a ride on a pimped out school bus to Golden Gate Park. With that said, when we arrived to the festival grounds we headed straight into the Heineken Dome, a large DJ Dome equipped with bar and LEDs for an hour long dance party.

At around 5:30, we headed out of the party dome and relaxed to the end of Jurassic 5 and Yeah Yeah Yeahs performing on the main stage. After sitting and refueling at one of the hundreds of food stands surrounding the main area, we headed over to GriZ who would be playing on the smallest stage there, the PanHandle stage. I have been a fan of GriZ for awhile and knew he was going to put on a great show. Because he was on a smaller stage, we easily moved our way up front and got ready for what was by far, my favorite set of the entire weekend. GriZ absolutely crushed it. With the right mix of live saxophone, jazzy chillstep, and intense drops, the vibe of the crowd was amazing. Everyone was feeling the electronic heavy set and having a great time.

As GriZ sadly came to an end, we moved to the neighboring stage for the headlining act, Phoenix. Thousands of people began pouring into the back Twin Peaks stage, and once again, it was hard for us to make our way to a decent spot. Regardless, we danced our way through Phoenix and chart topping singles “1901” and “Lisztomania.”

After a late Saturday night, we had a slow start to our Sunday morning. Arriving via limo to Golden Gate Park, we entered the grounds just in time to see classics Hall & Oates take the main stage. I made sure to reserve energy knowing there was a solid EDM lineup following: A-Trak, Dillon Francis, and Kaskade.

As the calm, soothing vibes of Hall & Oates music came to a close, we made our way through Golden Gate Park to the Twin Peaks stage. Once again, we were stuck behind the sound booth and experienced not the best sound quality, but had enough room to dance around and bust some moves to back-to-back A-Trak and Duck Sauce bangers such as “Big Bad Wolf” and the infamous “Heads Will Roll” remix.

After the Fool’s Gold owner shut down his turntables, we headed next door to the smaller Panhandle stage to grab a good spot for the music-producing comedian himself, Dillon Francis. As fans gathered with large, blown up cutouts of Dillon’s face and the stage began to fill with inflatable cats, the air filled with excitement and building anticipation. Standing only about 5 rows from the front, we had a great view of the stage (not always a common occurrence for me being only 5’2”), and as Dillon walked onto the stage the crowd went crazy. As expected, the 25 year old king of Moombahton tore it up with hit singles “Messages” and my personal favorite “Bootleg Fireworks.”

And finally, the last set of the weekend was upon us: Kaskade. Hoards of people piled in over the hill to set up camp at the back electronic Twin Peaks stage. I grabbed my friends’ hands as we made our way through to the front of the crowd. With a mind-blowing light show and a perfectly mixed set featuring songs from both new and old albums, Kaskade put on an amazing show. As the melodic lyrics “..of all waves in your atmosphere” carried over the crowd, everyone euphorically sang along and danced the night away to their hearts content.

Location: 7 out 10
Outside Lands is located in the vast and beautiful location of Golden Gate Park. Spread across the Polo Fields, Speedway Meadow, and Lindley Meadow, a festival goer really couldn’t ask for a much more ideal location to enjoy some of the world’s best musicians. However, if you’re somewhat familiar with San Francisco, our summer doesn’t usually happen in what you would consider traditional summer months. Often known as “Fogust,” August just so happens to be one of the coldest and most unpredictable months for weather. With a mix of sun spots and misty rain, I wouldn’t mind moving the festival one month out to September or October when it’s nicer outside.

Also, for those who do not live in the Golden Gate area, the park is not the most accessible place to get to, especially when there’s thousands of other people heading in the same direction. If you don’t plan ahead, it can take hours trying to find a ride both there and back from the park. In response, the festival has gotten better at planning shuttles and other modes of transportation, however, it’s still pretty essential to book rides in advance, such as school buses, limos, or carpools of some sort.

Lineup: 8 out of 10
For a smaller festival in only its 6th year, Outside Lands secures an impressive lineup, boasting greats such as Tom Petty (2008), Stevie Wonder, Metallica, and Skrillex, (2012), Deadmau5 and Muse (2011), and Paul McCartney and Kaskade (2013). Even though I am obviously an EDM junkie, I like that Outside Lands provides something for everyone, from Indie to DJs, from rock to classics, you will see all ranges of age and type at OSL.

Amenities: 9.5 out of 10
Out of all the festivals I have been to, OSL is one of the best at making sure festival goers have everything they need to help ensure an amazing 3 day weekend. A city full of food snobs, there are food stands upon food stands with some of the city’s best restaurants providing easy to grab vegan, veggie, and carnivorous festival eats. On a similar note, there are bathrooms around every corner, and you rarely have to wait more than a few minutes to relieve yourself of all the beer (or wine) you’ve been drinking all day. Or, as most of my guy friends prefer, the forest of trees surrounding the festival grounds does the Job just as well.

All in all, the Outside Lands Music and Art Festival is a fabulous long weekend full of amazing music, awesome food and drinks, and memories that I will never forget.

Hit up the Outside Lands website and read/see more about the San Francisco festival here.
Check out some of the live performances, on UStream.

Outside Lands has now joined the evergrowing list of festivals who are becoming more relaxed about cannabis consumption and its use at festivals. The...

Music festivals seem to be popping up all over the country these days. Every year we see small local festival crop up usually with...