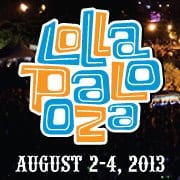 Lollapalooza is finally here. This weekend roughly 100,000 festival goers will take over Grant Park each day to check out some of the best artists from around the World. Although there is no DJ headlining the main stage like in years past (Deadmau5, Avicii, Justice), Perry Farrell still managed to book some of the World's Best DJ's. Below is a day by day breakdown of some of the artists you should check out.

Dillon Francis: Perry’s Stage, 4:30 – 5:30
Looking for something a little different? Dillion Francis, one of the creators of Moombahton, will surely get the crowd going with the fusion of house music and reggaeton. Look out for his upcoming deep house track, ‘Without You' featuring Totally Enormous Extinct Dinosaurs.

Flux Pavilion: Perry’s Stage, 7:00 – 8:15
What's Lollapalooza without some dubstep? Expect a massive crowd for his set.

Dada Life: Perry’s Stage, 7:00 – 8:15
Two things you will see a lot of at this set…Bananas and Champagne. Whether its people dressed up in banana suits, inflatable bananas or actual bananas. Expect the crowd to go “bananas” when they play ‘Kick Out the Epic MotherF*****' and ‘Feed the Dada'. Be prepared to “arrive beautiful and leave ugly” as they say.

Steve Angello: 8:45 – 10:00
Swedish House Mafia is no longer together but that won't stop Steve Angello from playing the hits (Save the World, Don't You Worry Child, Greyhound) in his set and many of his original tracks.

Dog Blood: Perry’s Stage, 5:45 – 6:45
Two of the biggest names together – Boys Noize & Skrillex. They just announced the completion of a new EP featuring some original tracks and remixes. Expect to hear many of the new acid house/techno tracks from the duo.

Major Lazer: Perry’s Stage, 7:00 – 8:15
A party like no other. There's the part of the set where they will run on top of the crowd in giant inflatable balls, or the part where they get everyone to take their shirts off and wave them in the air. Oh, and the music…Awesome. The dancehall reggae fusion is the perfect festival music.

Knife Party: Perry’s Stage, 8:45 – 10:00
Possibly one of the last times to check out the duo before they take a break from touring to work on some New Music. A high energy set full of electro house and dubstep tracks. A great way to end Lollapalooza.