Interview Up and Coming 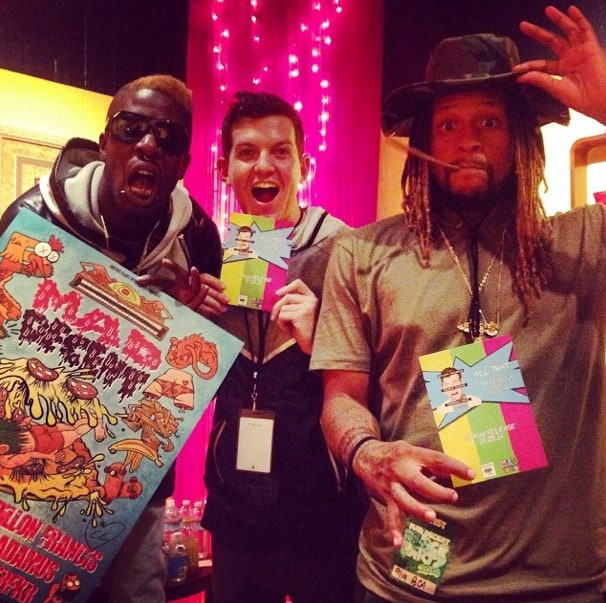 Couple of days ago, I wrote about the Rej3ctz new song “All That” which received a positive feedback. So I decided to go ahead and have a chat with them about various things.

If you have any questions you want to ask the Rej3ctz, feel free to tweet me @alexrogerswbu and I will ask them some more!

You have been working with some big names such as Dillon Francis, do you still get that “WOW” factor every time you see them, or is it just formalities?

Bounc3: Man its always a WOW factor to get in the studio with someone super creative and talented like Dillon. Once we get to work it’s all about having fun and making great music.
Mowii: That experience never gets old. We have been blessed to work with and be inspired by so many creative people… even a few legends in this business from Paul Oakenfold to Madonna to Diddy to Snoop, Too Short and E40. It is still and always will be an honor.

Many say that EDM and Rap do not work together and sounds a bit tacky when combined, do you agree with this?

Bounc3: Nah man EDM & Rap can definitely work. Just has to be the right collabs.
Mowii: The connection is Trap. If you can rap great over trap then you can rap over EDM beats. Especially party music, that’s universal.

What is your biggest inspiration?

Mowii: Madonna. Her work ethic and her ability to be artistic and keep reinventing is amazing. I had the opportunity to tour with her for several years and she is definitely the biggest inspiration in my career.
Bounc3: I gotta go with MJ man. I remember always dancing in the living room to Thriller when I was little and my granny telling me you keep going, you gotta do that.

What was your starting point?

Mowii/Bounc3: Man we were just in the functions in LA like the house parties and underground clubs, just getting turnt up and having a good time. We all used to be in the krump scene together and then we started making music. The first song we dropped was called “Reject Stomp” back in 2008 on MySpace and we made our own viral video.
REJECT STOMP

It had a dance to it that we all used to do at the parties and we were called The Rej3ctz so people started calling it The Reject. That’s the footwork that some people also later started calling The Jerk. We gave it to our DJ bros like Dj Wizz Kidd, DJ Goofy 500 and they started helping us push it at the parties and we just got a buzz going for our music. It turned into a movement that people started calling The Jerk Movement and the LA Times did a big writeup on it and interviewed us as the originators and we just kept grinding ever since. That’s was the start of the whole New West movement that is happening now. It’s amazing to see all of our friends on and taking over, from YG to Ty Dolla Sign to Tee Flii to Mustard, so many more.
PS they’re all on our last project THE CREEZTAPE go get that on datpiff.com!!

Dream venue to perform at?

Have you got anything that people associate with you?

Bounc3: Our energy and our style.
Mowii: Yep we are always off the wall. You won’t forget The Rej3ctz.

Do you write songs which have meaning behind them, or is it on the go thing?

Bounc3: Both. It’s a 50/50 thing. Like “All That” was just off the top.
Mowii: And then “Cat Daddy” was more of a concept we had, we knew we wanted something that would take over for the kids but also be a little ratchet and we wanted it to have a dance to it.

Out of topic, imagine you are in the middle of a zombie apocalypse. Where would you hide?

Bounc3: Wherever the weed is at!!!
Mowii: I don’t know about that one man…I can’t be telling everyone where I’m going to hide!!

Big thanks to The Rej3ctz (Bounc3 and Mowii) and everyone who allowed this interview to go ahead.