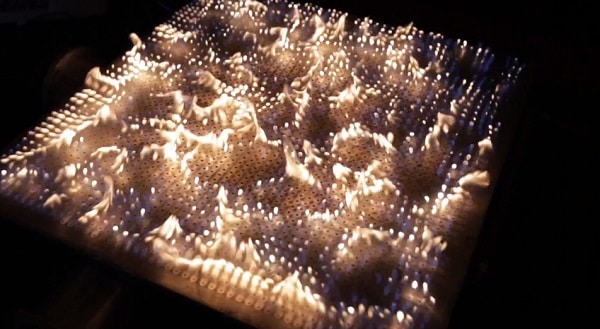 As seen above is the miraculous creation of Danish physicists, so called the Pyro-Board. This offspring of science is actually a Ruben's Tube made into a square plane of fire manipulation. The board, and Ruben's tubes work by using standing wave formation to control the height of the gas and thereby, the fire.  You can watch the video above from internet truth vloggers Veritaserum and they will explain it in totality. I for one had my interest piqued by the dope track they decided to set the board to. If the awesome trap beat managed to steal your attention away from the fire's entrancing moves, click below to check out some of the work of Kevin McLeod, who releases all his music under a Creative Commons License. He is currently the subject of a documentary called Royalty Free Music. His song that was played to the pyromaniacs wet dream was “Ice Flow” and can be heard below.

In this article:fire, kevin mcleod

As Ultra Music Festival wraps up Day 1 with major performances from Matoma, Nicky Romero, Fedde le Grand, and Marshmello, not everything went according...

Justice's new album, ‘Woman', was an electrifying master class in what we should hope to achieve in dance music. One of the stand out...

If you have been following Monstercat these past few weeks you must know that they have had some interesting releases up their sleeves. From...