I Am a MoonChild: Interview with Kerli
Advertisement 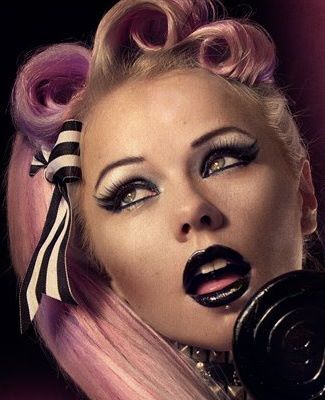 Kerli, a 27 year old singer from Estonia, has made a name for herself among an ocean of vocalists. It's never an easy decision to start a life in music. So many careers are over before they get started. Kerli describes her decision to pursue a career in music as a destiny, not a choice:

“I grew up in the woods of a soviet occupied Estonia, so we didn't really have much going on when it came to entertainment or the arts. I always felt like an alien, dying my hair Neon with sharpies and coordinating elaborate sets for other kids in the blocks to play with. I felt a deep sadness at all times cause life as I knew it just didn't seem satisfying, but I had no proof anything else existed until I left home at 16 and started seriously pursuing music, first in Sweden and then in the US.

Making music was never a question or a choice for me, it was just what I was born to do.”

Some vocalists prefer to stick with a single dance music genre. On the other hand, Kerli has worked with a huge variety of dance music producers. The world of EDM is so heavily divided into sub-genres and genre-purists now-a-days. Kerli finds her niche in more relaxed, emotive dance music, but also feels that genre diversity is an unnecessary, chauvinistic cause:

“My heart definitely belongs to the more down-tempo, melancholic stuff when it comes to electronic music. I've done a lot of different features cause it's nice to work with different sounds and vibes. I also love making friends through music so I've wanted to stay open to what comes my way…to me it's all just music.As for the music snobs – It's just the people who need their music taste, fashion, religion or eating habits to give them identity so they're viciously holding onto their idea of themselves, wearing dubstep t-shirts and putting “vegan inside” stickers on their cars. It is what it is.”

Naturally, we were curious who Kerli would like to work with in the future. Needless to say, we weren't disappointed in her answer:

“I'd love to work with Above & Beyond, their soundscapes are gorgeous. Also I'm a huge fan of Bassnectar. I admire artists who use their platform to inspire.”

In the last 10 years, dance music has exploded around the world, and getting a gig as a featured vocalist is slowly becoming an opportunity for the elite and established. It can be difficult for a newcomer to break into the industry. We are all excited to see where the vocalist industry is headed, and how dance music affects the trend:

“Vocalists are always vocalists, doesn't matter if they're singing on electronic or acoustic tracks. People are always going to want to hear someone sing a song that they can sing along to, so that whole part to me isn't really genre specific. However, I am happy to see that so many incredible writers/performers get attention by collaborating with electronic music producers.”

As a featured vocalist, it can be difficult to balance a solo career. Kerli has found a healthy equilibrium. She works independently as well as with the world's biggest dance music producers. Last year she released an her epic EP “Utopia” that you can listen to, in its entirety on soundcloud.

Kerli has spent a lot of her time pushing hard for gay marriage and LGBT rights in America and around the world. In 2012she performed across the United States in support of gay rights. Over the last 2 years, the public view has obviously changed. True equality is the ultimate goal, but is it a realistic one?

“I hope there will be true equality one day. We're working on it! It might take a few generations though. Gay people still can't get married the same way a straight couple can and sadly a lot of people in the world view the pro/anti gay topic as a political view. Another human being having equal rights to marry and raise kids is not a political view. This is a human rights issue.”

Music has always accompanied social reform. Where politics and religion sometimes come up short, music brings people together. The perspective of a famous musician can often hold more weight than that of a public figure.

Kerli's career is only getting started. We are excited to get to follow her success going forward. She has done so much, so quickly. If you're as interested in her as we are, make sure you check her out on social media:

In this article:Kerli, seven lions