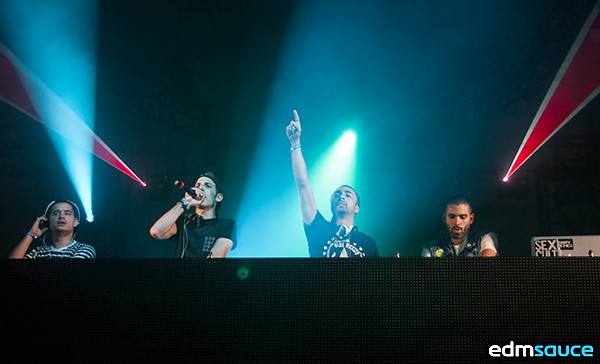 When the chance of getting an interview with the French quad of Thomas, Charly, Julien, and Pitchin, more commonly known as Dirtyphonics came around at Camp Bisco this past weekend there was no way to pass it up. These four genre-bending artists with influences ranging from Daft punk and Skrillex to Metallica and Korn, are known for their laissez-faire party attitude, and they have recently released one the most interesting albums I have heard in a while. “Irreverence” which dropped just a few months ago takes you on a journey through the minds and inspirations of these four, from the electro-house night anthem “No Stopping Us,” featuring Pavan to the heavy hitting metalstep/drum and bass banger “Walk in the Fire.” Getting insight on this uber-expressive and transitional album had to be done and having the chance to sit down one on one with these guys was a pleasure all on it’s on.
On first introductions the guys were pleasant and cordial. Relaxed from the start no questions were off limits and everyone was eager and willing to discuss inspirations and what they had in store for the Camp Bisco crowd they would play for that evening.

EdmSauce: So how's you experience at Bisco been so far?

EdmSauce: [Who] have you guys gotten to see?

EdmSauce: Are you guys stoked for your set tonight?

EdmSauce: Any surprises for the night you can key us in on?

Pitchin: We have new tracks and new remixes we just did

Thomas: We just finished a remix for Borgore

Pitchin: Linkin Park, and new remixes from other people for us

Charly: Yeah we’re releasing new singles from the album, so that gives us the ability to bring on the family, and people we love the music of and ask them to remix our music

EdmSauce: Who would you say is your favorite person you’ve remixed, or has remixed you?

Charly: Marilyn Mansion was something really important to us because he’s an artist that we all listened to when we were teenagers.

Julien: We’re pretty happy to have worked with him

Pitchin: We just met him when we were playing in Paris. Just the fact that he asked his management to have a remix from us was like….uh alright… I don’t even know how you know about us but anyway…let’s do this!

Charly: Yeah, even the remix we did for Skrillex, we just met the kid three or four years ago when he was just starting and then it was like BOOM he blew up and wanted a remix from us. We’re like F@#$ yeah.

EdmSauce: Speaking of Skrillex…You guys have like a skater/rock influenced background, do you feel like you finally got to show where your roots are and where you want your music to go with this album?

Charly: Yeah definitely. That’s the cool thing when you get to write an album like a full length you have the opportunity to come up with ten tracks of, whatever, and explore a little more than if you were just putting out a single or a double track together. We definitely felt our rock roots, we played with some dubstep, it gave us the ability to go through the whole pallet of sounds that we love and go a little further.

Pitchin: And we had the time to do it. Most of the time with remixes or singles, everything is happening in a rush, all the time, which is good, because sometimes you have an idea and you focus on it and you go. But yeah it was good to just take some time and (exhales) whew…chill out in the studio.

EdmSauce: What’s your studio life like? Do you guys just kick back and hang out or are you like all work?

Charly: Little bit of both. Obviously we go in with the intention of working, but you know when you spend nights or whatever, this guy can tell you better because he like lives in the studio.

Thomas: Actually think we work, but we actually hang out. Haha

Charly: I don’t agree at all.

Charly: During the day it’s like emails, phone calls, people showing up, all that s@#% and when it’s night time you can really focus on….the beers

At this point it’s become obvious that these guys are not only complimentary musicians, but great friends as well.

EdmSauce: How has your fan reaction to your album been so far? Everyone’s digging it, lovin it?

Charly: Awesome. What’s really cool is that when we first started, crowds were really separated, like the drum and bass crowd, the dubstep crowd, whatever; from the get go we were like let’s take all those different genres of music and put them together into one big set, and what’s awesome is that throughout this five or six years we were doing this we saw this explosion of one huge bass community. That’s super awesome! They’re either f@#$ing mosh pitting or singing along to the lyrics.

EdmSauce: So since we’re here at Camp Bisco and you guys are out touring all the time, what’s the one thing each of you need on the tourbus?

Pitchin: Your Laptop with all your stuff, your music, everything you need to work with. All the time anywhere, playing, anywhere.

Julien: And a good day at the Ritz!

Pitchin: The stamps too, the stamps!
(For those of you who have never seen Dirtyphonics live, “the stamp” is a stamp the boys use on their fans at shows. It reads “I Am Dirty!”

Charly: WOW….hmmm…one of the craziest was f@#$ing Red Rocks, [in Colorado]. I mean..

Julien: Pretty magical, this venue is just so f@#$ing insane.

Thomas: Even the venue empty is like something you can stare at for a long time. And because it’s an amphitheater everyone can see what we really do on stage. And we can see every single person because of the [steps].

Pitchin: Even sound wise it’s wonderful. [Also] Tallahassee was f@#$ing crazy! It was a BIG surprise. It was a Sunday night, all the students were done with school and stuff, so we were like “okay we’ll see.” It was the last gig of the tour. This venue was packed as f@#$, the energy was insane, I mean yeah!

Charly: Here the country is so big, there’s crowd differences all over from the east to the west to the Midwest. We’re just lucky because when we first started we started touring all over. Other bands and groups get big in their own country first and it takes them a bit of time to get out. When we started we played Europe, the US, Australia, Asia, and you know, we keep going everywhere at the same time so cultures are different, traditions are different, but to us it just feels like one big dirty world!

EdmSauce: So I’ve heard you guys talk about how “dirty” is really a means of freedom of expression. How important is that message for you and to your fans?

Charly: Yeah we’ve heard beautiful stories where a fan came up to us after a show saying about how through our music and what we do they [got] through hard moments in their lives whether it was being sick, or studying, or breaking up with a girlfriend or whatever, and to have this ability to make music that’s gonna inspire people to get through the hard moments and give them memories of the good ones, that’s what we call being dirty!

As the interview came to a close you could see what passion and determination had fueled in these four guys: a brotherhood wary to take life too seriously. They were four skater boys from France, who grew up listening to Nirvana and Linkin Park, and evolved in the EDM community forcing its supplementary evolution and acceptance. Later that night we would get a peek at the “dirty” lifestyle catching their set at the Bisco “Big Tent” dance tent stage. They brought energy and charisma to the stage that made every face in the crowd light! Clinching the feeling of the night as they ripped open the musical boundaries of predetermined genre specific set lists with “Chaos” off the new album, the boys of Dirtyphonics did exactly as promised. They continually changed tempo, tone, and attitude with each song they played giving everyone a little taste of what the “dirty” life has to offer.

Stay tuned this weekend for more reviews from Camp Bisco!

If you're like me, you've been an avid Dirtyphonics fan for close to 10 years now. With releases spanning multiple different labels from Monstercat to...

Motion Notion is ready for another year in the beautiful Beaverfoot Lodge in Golden BC, Canada. This year's music festival offers quite an extensive...