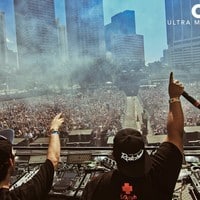 For all of you who were lucky enough to see Carnage absolutely kill it live at Ultra Music Festival last weekend at the “TRAPPED OUT” stage, you had witnessed some madness. Weekend 2 of Ultra Music Festival 2013 was LA based DJ, Carnage, first live festival performance, and he definitely took his “festival trap” style to the next level.

Since trap music has been hitting the mainstream stereo systems more and more over the past few months, many artists have been expanding their musical talents and trying out new sounds. Although, it is been pretty evident that not many dubstep and house artists belong in the trap scene (Afrojack, Skrillex, etc.), Carnage most definitely has an impressing streak of talent for it. Migrating from making tech-house tunes, Carnage started producing trap music specifically for festivals, and to say the least he knows how to TURN UP!

His set was just about an hour long, dropping some banging trap tracks, along with unexpected dubstep and different house tunes. He opened his set the right way, by dropping his new track, “Incredible,” featuring Borgore. Following with more of his own tracks such as “Bang!,” “Kat!e,” and some of his killer festival trap remixes, such as Deniz Koyu, “Tung (Carnival Festival Trap Remix), Sandro Silvia & Quintino, “Epic” (Carnage & Luminox Festival Trap Remix), and more. Carnage played some exclusive songs in his set, while including a festival dub remix of Trinidad James’ “All Gold Everything” featuring the one and only Protohype. Carnage showed Ultra Music Festival what was good, and kept it going until the last song of his set.

Ultra Music Festival had a pretty killer trap artist line up this year, featuring Baauer, Bro Safari, Flosstradamus, gLAdiator, and more. Carnage definitely brought some madness to the table with his performance. I could only imagine how incredible he was live, but this streamed set does the Job. Take a listen below, and get ready to turn up!