Carnage's 'Michael Jordan' Will Have Many Remixes
Advertisement 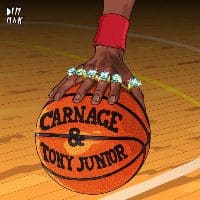 Carnage and Tony Junior's upcoming single ‘Michael Jordan' is already a huge hit with big name DJ's such as Porter Robinson, Avicii, and Tiesto who have been dropping it at the largest festivals around the world. With a set release date of July 23rd, Carnage announced earlier on Twitter that he already has plans to include many of his friends to creatively remix the Trance/Hardstyle influenced hit!

Gonna have my friends make a bunch of gritty… Creative remixes to #MichaelJordan … It's about to get really good!!!

Producer Ookay has already uploaded his trap preview of the new single which is due to be released same day as the original mix as a free download. This preview will definitely have you feenin for more!! It is uncertain what the actual number of remixes will be, but according to the big guy himself, he's “got a bunch.” Check out the first remix below! You can purchase ‘Michael Jordan' July 23rd on Beatport!

In this article:DJCarnage, Ookay, tony junior

Ookay Brings the ‘Saxy’ Vibes in “Not Again”

Inching closer to the release of his highly-anticipated sophomore album, Ookay is back with “Not Again,” the third single to be revealed to date....

Thriving producer Saint Punk has put his unique twist of grunge house sound on Ookay & Cesqeaux’s latest track, “The Pit”. Since his debut...