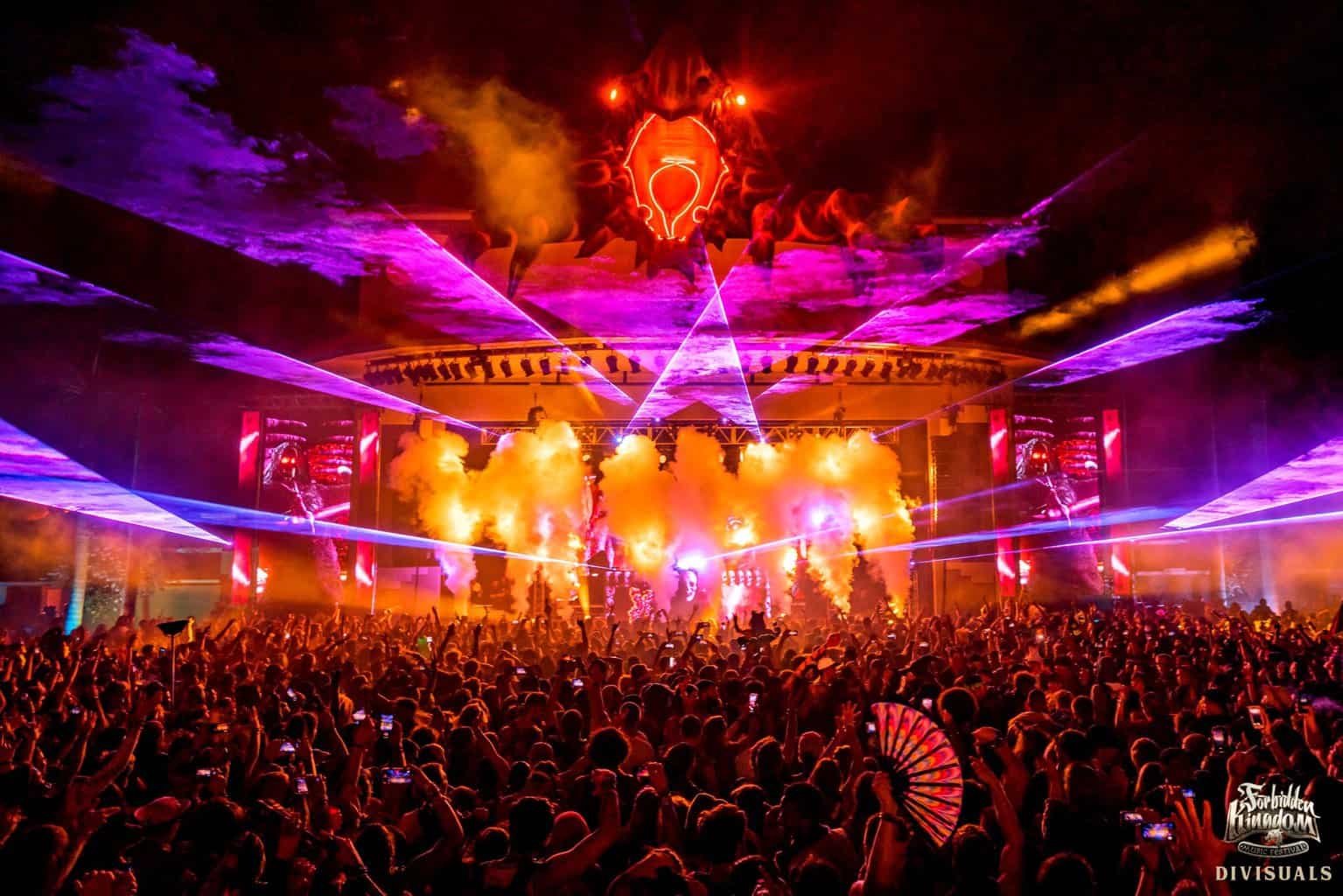 This past weekend, thousands of dedicated headbangers attended bass-filled South Florida music festival, Forbidden Kingdom. It took place at beautiful Boca Raton's Sunset Cove Amphitheater. This year, I had the second opportunity to attend this impressive music festival. In comparison to last year, it was seriously out of this world! It is incredible to see how much it has changed.

Forbidden Kingdom Music Festival promised that this year's event would be even bigger than last year and they successfully delivered. There were not only three stages at the venue, but there was also a silent disco where many locals artists had the opportunity to perform. There were many vendors that sold interesting goodies such as pashminas, rave attire, paintings, and more. There was so much to do at this year's event that it seemed like there may not be enough time to do it all. The changes that were made this year were extremely impressive.

Venue Expansion and the Stages
When heading over to Forbbiden Kingdom Music Festival this year, I expected this event to be absolutely incredible, and it was! I wasn't sure how the venue would be expanded, especially since last year there was only one stage and a silent disco. However, the festival surely succeeded.

First, the Silent Disco was so much fun. This is where many attendees were able to discover new forms of bass music. Plenty of local DJs across South Florida debuted their original music and sets here. I've always loved the idea of a Silent Disco. If you have never done it before, it is seriously worth trying out. You never know what kinds of new artists you will find here. Second, there was the Village stage; on this stage platform, dozens of uprising DJs across South Florida performed, such as Big N Slim, D3V, Symbiotic, Too Kind, Morse X Code, Goon, and much more. These artists had the opportunity to show FKMF attendees what potential talent they have.

Next, the Cyberian Stage; this is where many breakout artists, such as PhaseOne, Trampa, Marauda, ATliens, 12th Planet, Bear Grillz, G-Rex, and Cookie Monsta, performed for thousands of bass heads. Truthfully, I spent most of my time at this stage. The production was amazing and the lighting was absolutely insane. This was honestly the best place to headbang. The amount of available space at this stage was unbelievable. You could sit down on the grass and relax while watching the show or you could have stood comfortably and danced the night away.

Finally, the Forbidden Stage; this was the stage where most attendees spent most of their time. With the return of the well-known dragon figure, the performances at this stage were unbelievable. The bright LED lighting was greatly intense and there were so many lasers. Honestly, you were completely absorbed by this incredible experience. Many artists, such as Rezz, Excision, SVDDEN DEATH, Sullivan King, Wooli, Ganja White Night, and Liquid Stranger, performed at this spectacular stage. Best believe that attendees were doing most of their headbanging here.

The Performances
Since the lineup was first announced, you could tell that it was going to be a great year for Forbidden Kingdom. So many popular bass artists came from around the world to perform in the wonderful city of Boca Raton. Each performance was fantastic! There was not one set that was horrible. Some of my favorite performances were PhaseOne, Wooli, Excision, Big N Slim, Trampa, and Sullivan King. These sets were truly memorable and completely out of this world. They were truly unforgettable performances.

Food and Drinks
Forbidden Kingdom Music Festival seriously expanded its food and drink options this year. Not only were there vendors, but there were also many unique food trucks! There were so many to choose from. They also had plenty of unique drink options. During day 2, I actually had the chance to purchase a refreshing pineapple slushie that was served in an actual pineapple! It was a big hit at the event.

Honestly, food and drinks at Forbidden Kingdom this year were not as expensive as they were last year. I actually found the prices to be quite reasonable. There were so many options to choose from, even if you were on a special diet. Most importantly, it was all absolutely delicious.

Extra Activities
If you needed a break from all the loud bass music, then there was still plenty to do. This year, there were actually yoga sessions being held for all attendees to take part in. Not only this, but some people were also lucky enough to receive some epic massages too. Other than forms of relaxation, there was also a Kandi bar and even a body marbling booth where attendees can dip their arms into some paint. Last, but not least, there were also some small Clothing vendors that sold some of the best rave attire that you couldn't find anywhere else. There was so much to do, it was impossible for you to be bored.

Drip drip 💧 Body Marbling was so dope! Who got a chance to paint their arms? #FKMF2020 pic.twitter.com/xiHFGnzElM

Forbidden Kingdom 2021
It has already been confirmed that Forbidden Kingdom will definitely be making its return in 2021. For the 3rd annual event, many surprises are sure to be in store for future or returning attendees. According to the founder of the festival, Pepe Vargas, we should expect the unexpected. If you are thinking about attending FKMF next year, then stay tuned for more information and updates on the event.