Who Is Marshmello? An In-Depth Look At Who Is Behind The Mask
Advertisement 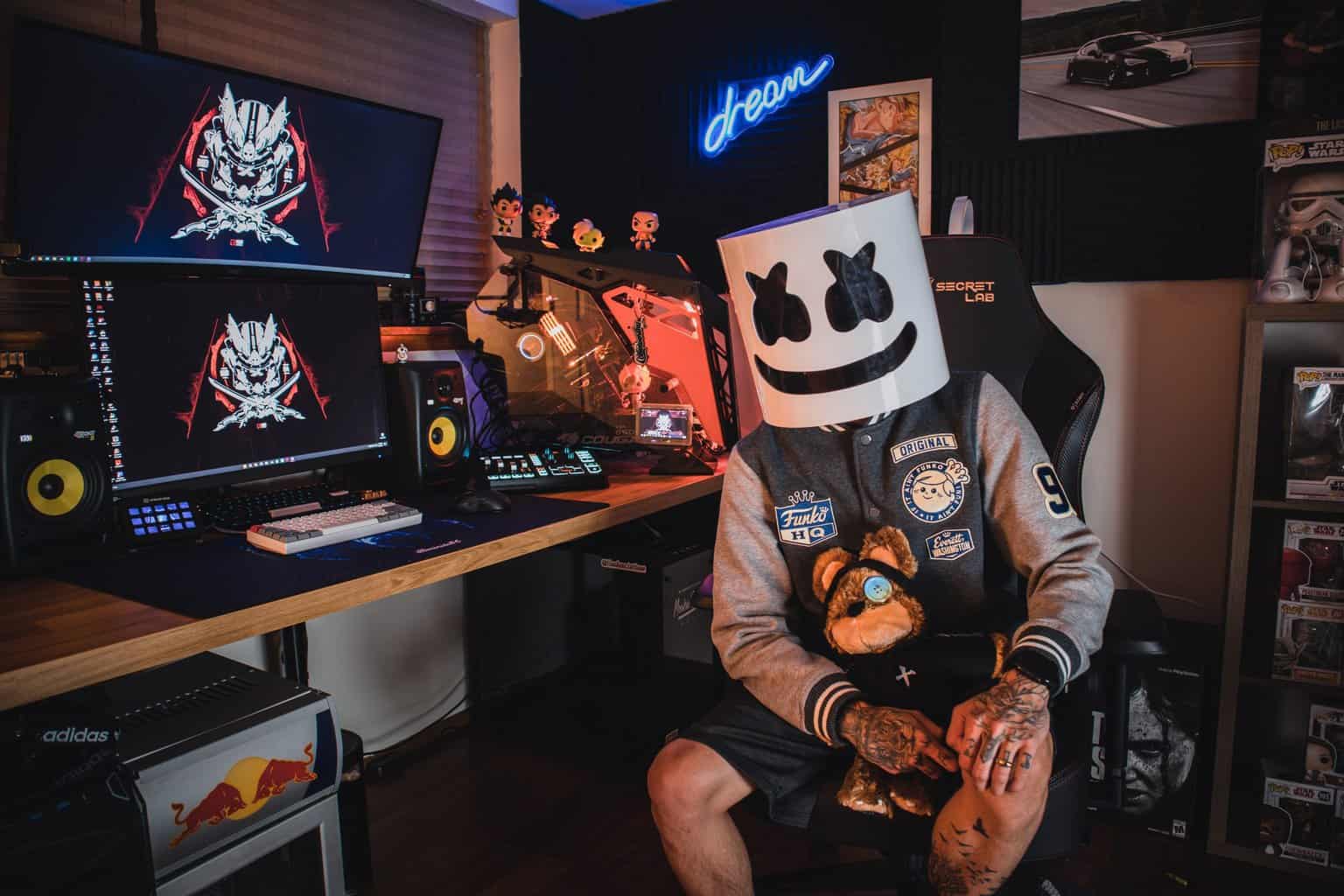 who is Marshmello? Around two years ago a producer launched onto the scene gaining an incredible amount of publicity very quickly. His name was Marshmello and he had a face that you could honestly never forget. His giant cartoon marshmallow mask with the cute eyes was a mask that left an impression on everyone that came across him. Established producers such as Dotcom and Jauz instantly supported his music with reposts to their Soundclouds and social media. Marshmello‘s music was fun, simple, and oriented in trap elements. He was truly an overnight sensation.

Update: Feed Me, a dubstep and electro house producer, unintentionally revealed who Marshmello was when he posted an Instagram story, not realizing that Chris Comstock, dressed in white, was reflected in the mirror behind him.

There are a lot of masked producers. Daft Punk have their robot helmets and Deadmau5 has his mouse head, but masks do not always hide the true identities of the artists (or in Deadmau5's case the Mask was never supposed too). This is where we see a unique fact arise – nobody truly knows who Marshmello is…well maybe the better way to say it is that Marshmello has never officially come out and confirmed his identity. There have been many theories over the two years he has been active as a producer. At the end of the day to anyone who is a devoted fan of dance music culture, the true identity of Marshmello has been known for awhile. But if you are just a casual fan than maybe it just isn't as obvious. We decided to take a look back at the rise of man in white and explore all the theories and why after so much speculation the answer to the question of who is Marshmello? Has finally been confirmed.

At the time of his arrival to the world of dance music, Marshmello‘s sound was original, and incredibly exciting. Trap was more of an intimidating genre, especially to newcomers to the world of EDM. It was filled with intense bass, and had it roots deep in hip hop and dubstep. But Marshmello was one of the first artists to take the trap arrangements and lay a more lighthearted almost pop vibe on top. He quickly capitalized on his success with many high profile remixes for artists such as Skrillex, Diplo, Zedd and of course Adele (though the last one was unofficial). This is when questions began to arise. Who the hell was this newcomer with a bold new sound, being supported by heavy hitters on their Soundclouds and obtaining official remix opportunities for artists such as Zedd and Skrillex. The question that was on everyone's mind was – Who Is Marshmello? Before we get into the real answer lets take a peek back at some of the more entertaining theories.

There has been a lot of speculation around the question of, who is Marshmello? The first and most popular theory was Skrillex. Sonny Moore seems to always be the first guess of any masked producer. Skrillex has an incredible range in music abilities, and is constantly working on side projects, so honestly it was not a super far fetched assumption. The official Jack U remix only made things a little more compelling but alas it was soon revealed that Marshmello was definitively not Skrillex.

The next one up was Deadmau5. No, that actually never happened. Deadmau5 is not a fan Marshmello – we will touch on that a bit later though. This past year at EDC Las Vegas, Marshmello was playing the Cosmic Meadows, and half way through his performance he announced he would be revealing his identity. The crowd stood in awe…as the helmet was removed and wait…TIESTO WAS REVEALED? This put the entire world of dance music into a tail spin, everything we knew had been a lie. Except obviously this was a joke and just a troll. So the question still stands… who is Marshmello?

Marshmello Is The Alter Ego Of An Established DJ

Well you see the answer is pretty obvious at this point. Marshmello is the alter ego of an already established DJ, but one that many people may not be familiar with if they are not a devoted dance music fan. Around the time the EDC troll died down people started to notice a pattern. A pattern of events that was linked by one man, Moe Shalizi.

Moe is an artist manager at Red Light Management, and he is pretty much the absolute best representation money can buy. He represents Marshmello, Dotcom, Jauz, Slushii and a few more DJs at that. But wait…where have we heard those artists before? Right…Dotcom and Jauz were two of the artists who initially gave a ton of love to Marshmello in the very beginning. Tiesto, while not officially under Moe is represented by Red Light Management as well. Hmm kind of fishy if you ask me? Why would an incredibly established manager have his clients reposting the work of a relatively unknown artist…unless of course one of those artists was actually Marshmello himself!

My name is Chris…short for Christmas came early

Around the time that we started to see an explosion of work coming from Marshmello that we also saw a massive decline from Dotcom. When we say massive we mean like Dotcom stopped making music and using his socials basically entirely. I mean that in and of itself is a good of sign. But there is more. One eagle eyed fan noticed that Dotcom and Marshmello also appear to share the same tattoo on their thigh. So for us that was enough who answer the question of who is Marshmello, but of course more details continued to pour out.

At some point the main part of Marshmello‘s marketing strategy was to create a beef with Deadmau5 who was notorious for being incredibly petty over social media. When Joel eventually got too flustered he brought the hammer down and called Marshmello out for starting his new identity since Dotcom was losing notoriety pretty quick. Dotcom is better known as Chris Comstock and Chris is better known as Marshmello. That is pretty much a wrap folks. If you needed to know who is Marshmello … there is your answer.

That being said it has become part of the Marshmello lure to never truly reveal the obvious. Chris will occasionally banter back and forth with himself using the Marshmello and Dotcom socials, and of course all questions around identity aimed towards the man in white are quickly ignored if not outright deleted. Can you blame them though? The re-imagining of Chris from Dotcom to Marshmello is currently one of the most successful marketing stories in modern day music. So yeah, while we may know the answer to the question of who is Marshmello now, that does not mean the stage character is any less fun.

Update: April 10, 2017. It was spotted that a “Comstock” was the writer behind Marshmello‘s “Keep It Mello” hit song.

With the festival season and Jauz’ consequential Block Party tour right around the corner, there’s truly no better time for a slew of fresh...