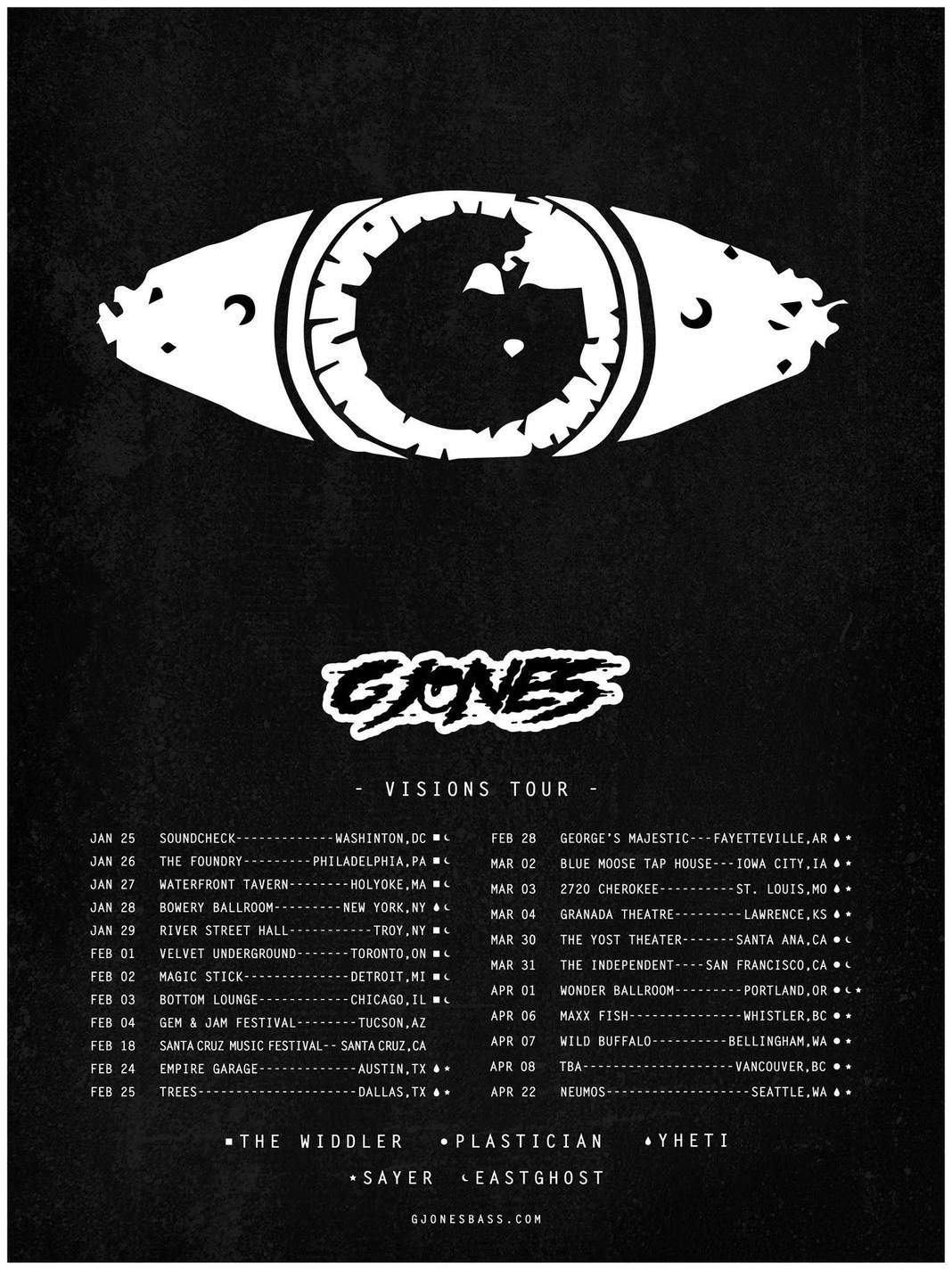 The wait is over. Bass god and Santa Cruz native, G Jones‘s newest 8 track EP “Visions” is finally here. This EP has been in the works for about a year and a half, according to Greg in a recent tweet. Jone's has had massive support from electronic superstar; Bassnectar, and other artists like DJ Shadow, Eprom, Bleep Bloop and The Widdler.

Many singles have been released from the EP over the past year including ‘Lavender Town', ‘Collision Course', ‘Pull Up' and ‘We See It Clear'. Each and every single has its very own distinctive sounds, rhythm and wonkiness. Now that the EP is here in its entirety, its truly breath-taking to hear G Jone's masterful production and trippy influences come out in another major project like this.

The EP title track serves as the premier song on the project, and rightfully so. The song takes you on an journey with the alien Greg Jones where previously unheard sounds new to human ears build into a heavy buildup that forces your head to bounce uncontrollably. True to G Jones' signature sound, the song has minimal melody lines and few repetitive elements. Each second is new and even wonkier than the last. This 3 minute track definitely serves well as the introduction to the album, and is one of the few song that was not previously released on his Soundcloud.

The second track was previously released by G Jones around 2 months ago. Since then, it has been one of our favorite tracks to get weird to. The melodic intro is different for Jones, but after the first buildup we are back into the typical abnormal progressions he offers. This track is reminiscent to sounds used often by alien bass producer; Bleep Bloop with its almost robotic sound snippets hidden throughout the track. We definitely recommend this song as a strange feature on your future pre-game/workout playlists.

If you have been lucky enough to see G Jones live, you have definitely heard this track before and witnessed the power it contains. Filled with trappy clap progressions, sirens and dramatic builds, this track has made its rounds in bass heavy sets around the country, being one of the staples of Jones' sets in the last year. A heavy head banging track without a doubt.

The final unreleased track from the EP is SIGNAL. We can only guess that the title of the track is referencing how Jones himself has signaled to alien life forms through his productions. Absolutely this is the heaviest track on the EP and features the most prominent vocals. With an reckless amount of cutting edge sound snippets and genre defying bass riff, this song its hard to keep track of, and we love it. An interesting track without a doubt, but definitely challenging to dance to.

Jones released this track about 4 months ago and since then we have not been able to get enough. The song progressively builds on one melody of synths that is so catchy our bass faces become prime real estate during this one. The build is perfectly suited to G Jones' sound, adding layers of 808's, sirens, and wonky drums. The drop takes that echoing melody and adds more layers to it. This was Definitely our favorite track from the EP.

6. FUCK WHAT YOU HEARD

Out for over a year, this nectar reminiscent track has become a staple in Jone's discography. With a ill-conforming bass line and eerie sounding ringings throughout, this track will surely make lose it with your entire squad in sync. Signature to Jones' sound, there are a multitude of random sound snippets and heavy bass that will surprise you every time.

LAVENDER TOWN was the first G Jones track  ever heard and I was immediately hooked. The range of diverse and new sounds was a lot to take in, but it seemed refreshing to be far away from cookie cutter EDM. What we love in this track is the continuous melody that is streamlined through every odd feature during the piece. The best parts of the track are when all the other basses, synths and for lack of a better word; noises, are removed and all you have to grasp onto is that synth melody. So wonky, so weird, so wonderful.

The 8th and final track from the EP acts as phenomenal closure to this packed EP. Hear what we had to say about it when it was released a few weeks ago.

Fantastic DJ and music production duo Bubba Brothers are back with a new impressive release, a 2-track remarkable EP ‘Basstribe’ comes out via the...

FLOORMAGNET Astounds Us with Newest EP Release, “She”

Floormagnet started their musical journey to get where they are today over 30 years ago, sparked by a fascination for the genre that started with...