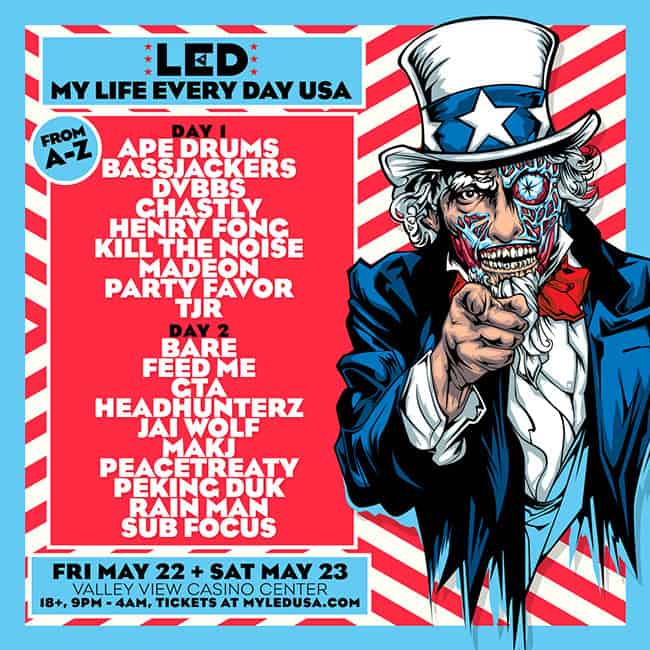 Memorial Day weekend presents not only the first three day weekend of party season, but also the beginning of summer for most schools (sorry UC system). This mix has upcoming LED event My Life Every Day USA poised for an incredible Friday and Saturday this weekend. If you have never been to an LED event in San Diego, let take you back to a few months ago so you can know what to expect. Valentine's Day Weekend brought LED Anniversary to a sold out Valley View Casino Center on a SUNDAY (with no Monday holiday), therefore the majority of people in attendance had either work or school the next day. This event was sold out and went harder and longer (LED events in San Diego go until 4AM) than any event I had attended in recent memory.  Hell. I had my first day at a new Job at 7 AM that same morning and the energy from LED anniversary was enough to carry me through a day of training with no lapse in energy. I am going to make a bold prediction and state that if LED can absolutely rock a random Sunday in February, a sold out two day event on Memorial Day Weekend (with the luxury of having Sunday and a Monday holiday to recover from the festivities), My Life Everyday USA will be nothing short of incredible. Do not be fooled by San Diego's chill daytime atmosphere. The people you can see around the city engaging in various beach and outdoor leisure activities will be the same people going mental until they are forcibly removed by Valley View Casino Center security. I have witnessed this with my own two eyes.

I have already spoken about the atmosphere LED provides along with prospect of having an opportune weekend. However I have failed to mention the most important detail, which is the line-up. San Diegan's live by the three B's; beach, beer, and apparently bass. My Life Everyday USA will be providing A LOT of the latter. The line-up is absolutely polluted with an eclectic mix of talent and you will not be disappointed.

Friday will start the weekend with very interesting mix of artists. Ape drums offers up a dance hall/trap sort of sound similar to (in my opinion) to Major Lazer and Jack Ü so this will be a very fun set. Bassjackers and DVBBS have repeatedly been atop progressive house and dance music charts for the past few years, therefore it is easy to expect great performances from some of dance music's heavy hitters. Ghastly will be providing a  change of pace for the crowd with some incredible future house/trap fusion. Expect some unique progressive house and the crowd to be jumping during Henry Fong. Drumstep, Drum and Bass, and Dubstep will be rocking the system when Kill the Noise takes the stage and will be the loudest set of the night guaranteed. Party Favor will plain and simple deliver on some much needed heavy trap. Madeon will exhibit the incredible production (both musically and visually) that has gotten him to superstar status at such a young age. Leaving TJR to drop some of that Melbourne Bounce we all know and love.

Saturday brings an entirely different feel and mix of genres. Bare has an interesting style that I can only describe as trapgressive house so there should be a lot of hype in the crowd for that set. There will be no absence of dubstep and drum and bass on Saturday as Feed Me (who also goes as popular drum and bass producer Spor), Rain Man (formerly part of Krewella) and Sub Focus will be taking the stage. GTA have risen to superstar heights recently and expect the crowd to go crazy during their set, especially when “Intoxicated” plays. Headhunterz provides the biggest curve ball to the whole weekend and will bring hardstyle to the stage (although his new sound has traces of progressive house). MAKJ has been killing it and his aggressive progressive house style will be really fun to watch. Peacetreaty has a really refreshing progressive house style (sounds somewhat Swedish House style) and his live show should be interesting to watch. Finally, Jai Wolf and Peking Duk will bring their own wavey/trap style of music (think What So Not) that has been making its way into the mainstage. These guys are both huge actually they have millions of views on their soundclouds, it should be amazing.

The artists are all amazing, LED puts on amazing production (sounds, stage, venue, and atmosphere), and the weekend timing is amazing. My Life Every Day USA has a lot of hype around it with good reason. Check the video below if you are not convinced (adversely, still check it out if you are convinced to get a little extra hype before the event). I think it will be safe to expect crazy crowds, foam glow sticks, and a lot American flag bikinis (judging by last years recap). LED: My Life Everyday USA will not disappoint and should come to be one of the highlights to your 2015 if you choose to attend! **Sorry tickets are sold out or else I would have posted a link to the ticket page.