Sonoma Raceway Plans to Host 4-Day Festival in 2017 That Could Rival Outside Lands, Coachella
Advertisement 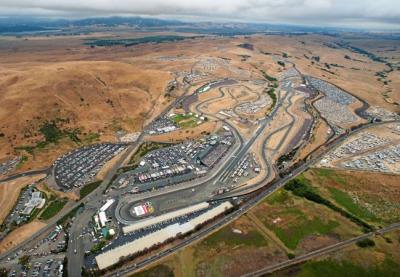 If the President and G.M. of Sonoma Raceway, Steve Page, can convince his native county's legislature to allow a permit that will extend his race track to be an entertainment hub, the venue could find itself with one of the biggest music festivals on the West Coast in the coming years.

“We think what we can offer here in a festival environment will truly be unique… there's a much broader opportunity to do things over the coming decades that will make this a better community resource,” Page said.

CBS San Francisco and the San Jose Mercury News recently covered the story with great detail and even a hint of optimism. Last Wednesday, the Sonoma advisory board had its first meeting regarding the proposal. Promoters of the festival suggested that the 1,600 acre raceway could attract as many as 55,000 attendees per day and host camping for up to 6,000 people. The city of Sonoma has only about 30,000 urban residents altogether.

Page also added, “There would be a lot of opportunities for the business community… wineries, restaurants and other vendors to participate.”

The Sonoma Valley Citizens Advisory Commission responded to and voted on the proposal after hearing the details in front of a big crowd at Sonoma's Police Department community room. The vote was 18 to 16, in favor of the raceway's expansion. Although locals vocalized their concerns about the noise, a general consensus was that this venture would be great for business.

Currently, the raceway is still limited to “racing and race-related purposes.” This process is expected to take a long time and Page expects to be able to have his debut festival in 2017 if the final verdict is a success.

“We have been approached on countless occasions by promoters who wanted to bring music to the facility,” Page said. “We never took any of those seriously. This was the first time the business proposition and the philosophy were appealing to us.”

Speedway Motorsports owns eight race tracks in the U.S. including Sonoma's. According to the report, its first co-sanctioned festival should be announced soon (to be in August at the Kentucky speedway). Page's vision is for this festival to use all of it's resources and accommodate with a midnight tent that stays open until 4 A.M. and try to promote local music acts.

Locals have compared this to the BottleRock Festival in Napa Valley, but with such a large venue and foresight, this may rival such events as Coachella in Indio or nearby Outside Lands. Stay tuned.

Coachella and Stagecoach Officially Postponed Due to Coronavirus

Coachella Valley Music and Arts Festival and Stagecoach have officially been postponed due to the coronavirus outbreak. The world-famous event confirmed on social media...