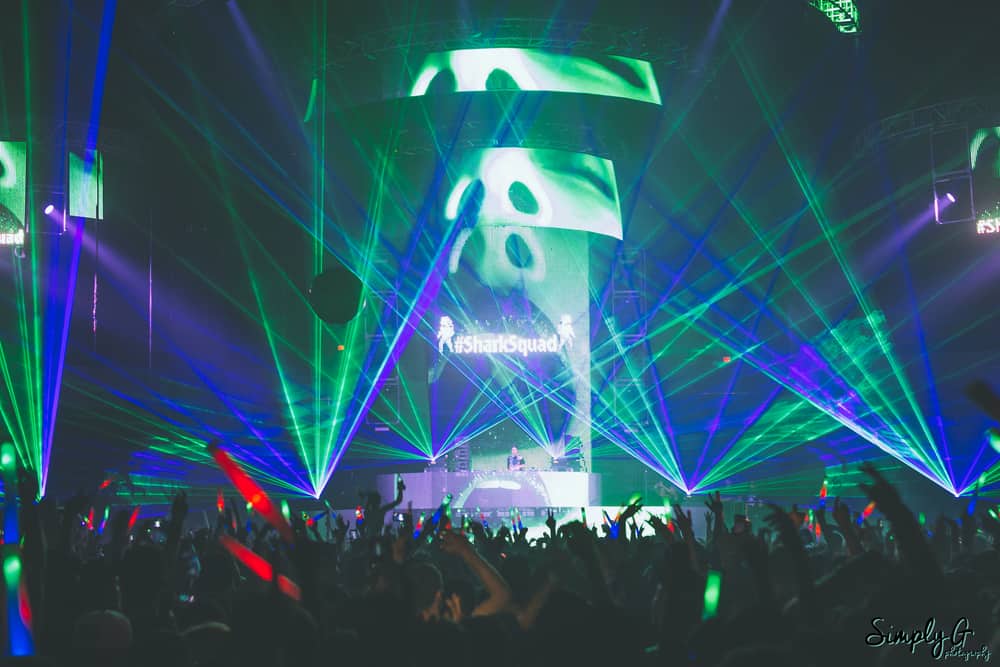 San Diego is not a city that would typically be considered amongst the world leaders in terms of passion for EDM. If you are a San Diego native however, you know that LED has been putting on events for years that display exactly the opposite of that stigma. LED Anniversary IV (18+) is one of San Diego’s signature events and took place on Sunday February 15, 2015 (Monday was President’s Day, thus the random event placement). Over the past few years LED has provided incredible line-ups for fans with artists residing at the forefront of EDM. The 2015 installment was no different and featured Brazzabelle, Valentino Khan, Jauz, The M Machine, Milo & Otis, ETC! ETC!, Jack Beats, DJ Mustard, AND Zed’s Dead (in order of appearance). An absolutely monstrous stack in my opinion. LED definitely showed a shift towards trap and bass this year, which seemed to be the dominant theme and intention for LED’s Valentine’s Day weekend.

While I chose to arrive around two hours early to LED Los Angeles the night prior, an extended nap prevented me from doing the same for Anniversary. I eventually showed up approaching 9 PM and the entire parking lot was full and buzzing ready and anxious for the event to start. The same infectious energy I had experienced in Los Angeles the night prior for LED's event there, was multiplied a few times over in San Diego. An impressive amount of people were all gathered early and their energy transferred to me, which made me absolutely ready to go in and experience everything the event had to offer. At first glance the venue was extremely large and accommodating, which made it easy to house the sold out crowd. The Valley View Casino Center is pretty much the mecca of San Diego EDM events because not only is the placement perfect in terms of limiting parking and congestion issues, but because events are allowed to continue until 4 AM there! While the view from the outside was definitely promising, once I made my way inside I was blown away by the production. The stage was huge and was paired with amazing LED screens, amazing lighting, and an amazing laser display that rivaled any I have seen.

(9 PM) Eventually I made my way inside and arrived halfway through Brazzabelle's set. Already the crowd was in full force dancing, jumping and overall just being absolutely crazy. Brazzabelle's wild and fun LED light outfit was definitely fitting for the environment being set forth by the fans. By this time (approximately 9:30PM) the dance floor was filled out and people were defecting towards the stadium seating area and setting up with their groups there in favor of more space, which is a really nice feature for a venue to have. The crowd size during this time was really interesting because at most events I have been to the opening sets are usually nowhere close to being at almost full capacity. However this could be attributed to the fact that Brazzabelle was playing the opening set because she a sort of “cult” following (such a cliché, I know). While she has been around for a while, she can be considered up and coming in popularity at the moment. Her production quality is constantly getting better and all her shows are what you would expect out of top caliber DJ's. It was really to the fans benefit that she still has an coming status though because she is the perfect start to a show and has a knack for the ability to set mood and energy.

(9:45 PM) Valentino Khan followed Brazzabelle and played to a full and energetic Valley View Casino Center. While Brazzabelle started the night with a progressive house style show, Valentino really gave the crowd a shift into trap and foreshadowed what was to come the rest of the night. The crowd reacted and oohed and ahhed (unofficial spellings) to the many different change ups he provided. Once again, like the night prior at LED Los Angeles, the Valentino Khan and Bro Safari remix of “Y.A.L.A” by M.I.A absolutely shook the crowd (and me) to the core and was one of those moments that you do not forget about a night. Valentino's performabce was aimed at the crowds pleasure and set up the dynamic for rest of the night. It was Valentino's birthday as well so being able to play to such a great crowd on that day was probably so fun. I ended up exchanging a few words with him backstage and he was so chill and down to earth, instantly making me an even bigger fan than I already was.

Amongst the crowd was a skyline of foam glow sticks, which is a special commodity LED provides for free. This adds a really cool visual experience in addition to what is out in front of you facing the stage. It is kind of funny that the addition of these free foam glow sticks, trivial as it seems, really elevates the stoke level of the attendees. Everyone seems to have fun with these and I saw countless times that these glowsticks ended up working as a sort of ice breaker or intro to conversation for a lot of people interestingly enough.

(10:30 PM) Up next was Jauz and his future bass sounds and the crowd responded in an amazing fashion. Obviously “Feel the Volume” was the anticipated Jauz track to be played and it was implemented in such a dramatic tension building manner with lights and lasers that when it dropped the crowd exploded. Everyone around me was moving, feeling, and ingesting the track making an incredible scene with elation all around. It was incredible. Although when I spoke to Jauz backstage he briefly mentioned that he felt that “Feel the Volume” receives better reception when other DJ's/producers play it. Pretty funny to me because “Feel the Volume” provided one of the most raw moments of the night.

(11:15 PM) The M Machine, Milo & Otis, ETC! ETC!, and Jack Beats continued the party with a cacophony of dope build ups, incendiary drops, and incessant hardcore r-rated partying that honestly did not provide any dull moments or lapses in energy. The crowd was absolutely mesmerized and captivated for this middle section of the night. Usually I experience crowds having a variance in energy throughout the night as each act passes, but it was as if the crowd was going hard whether they wanted to or not because these acts were just too good to take an intermission during.

(2:15 AM) With the previous acts putting out some amazing vibes, DJ Mustard really had no choice but to go in heavy. This was a very surprising set to me because I honestly did not know how DJ Mustard would mesh with the previous acts as he has a slightly different style than any of the other DJ's on the lineup. Yet, I feel as if this was collectively the favorite set of the masses just purely based on their reactions and reception to it. With every “Mustard on the beat, ho”, came sounds of enjoyment and the pure grime that ratchet dancing brings (in a good way). Everyone was enjoying themselves. Energy is contagious and seemed to spread to every corner of the Valley View Casino Center. I was blown away with the composition of this set and every song seemed to fit perfectly. Although DJ Mustard did break my heart by hinting at a YG cameo that never came to fruition, this set was an experience that I will not soon forget. I really paid attention to the people all around the arena during this set because the sights and sounds of people having fun is so enjoyable to me. There was so much dancing and moving around that my mood was just elevated and I was infused with the charisma that was in the air. DJ Mustard closed his set with a new ID so please keep a look out for that!

(3 AM) Zed's Dead baby, Zed's dead. It was the pièce de résistance of the night and the anticipation towards this moment was palpable the second their bass kicked in. It was 3 AM when they came on and the volume was turned up so loud that you could feel the waves pulsing through your body. When a headliner plays it should be clearly evident, and in this case, it was. The crowd was almost in a state of awe and although many of them had been non-stop partying for the greater part of 6 hours, there was no cease in the excitement that had been consistent throughout the night. This was a set that started and stopped at certain junctures dramatically and the dark lighting, foam glow sticks, and light shows being administered created such an incredible atmosphere. At one point I stood above the crowd in the top section of the area and the scene was just beautiful (by music event standards). The was just so much going on beneath me and the overall flow of what was going on seemed to be controlled by the music Zed's Dead played. That was not a feeling or sight I can just forget about. Zed's Dead closed with their remix of Jack Ü's “Take Ü There” and it was packed full of a case of the “feels”. It was indeed a perfect ending, yet there was still a large resounding chorus of “one more song!”, which did not end up happening. That did not seem to be a problem, however and fans left completely satisfied by what had just unfolded throughout the course of the night.

LED Anniversary IV San Diego was nothing short of amazing. The line-up, the venue, and the fans were just at superior levels. People were there for the music and that is the most important fact I could provide. LED did a great Job at providing the means to witness these performances to their greatest potential by putting together a complete package or features, artists, and accommodations. If you have never been to and LED event, or better yet an LED event in San Diego, LED is absolutely necessary if you are a fan of EDM.

*Disclaimer- I approach every festival or concert with an open mind and hold no expectation whatsoever for what I am about to experience. All of my reviews are written in a style reflecting exactly what I see, feel, and live. There are no prior biases or preferences projected into my reviews.