Paul Oakenfold's We Are Planet Perfecto Vol. 4 Tour At The Avalon Hollywood
Advertisement 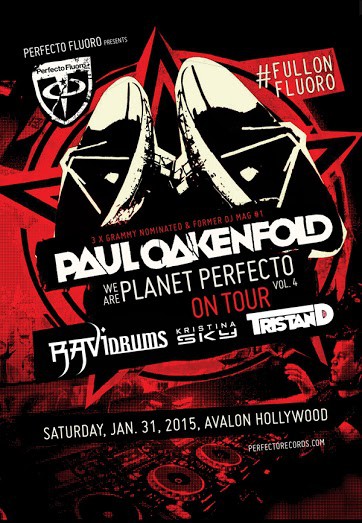 On January 31st, Avalon welcomes the return of British trance master, Paul Oakenfold. Joining him will be Ravi Drums, Kristina Sky, and Tristan D. Come out for a special night bringing the best trance has to offer.

Paul Oakenfold is widely regarded as one of the founding fathers of modern trance music, helping to push the genre early in it’s inception and to this day. Oakenfold has a wide array of original releases and has remixed popular artists like Radiohead, Madonna, Massive Attack, and U2. While he began his illustrious DJ career in the 70’s spinnin funk at Covent Garden in the UK, it wasn’t until the late 1980’s that Oakenfold took a landmark trip to Ibiza and forever changed the course of his music career. In the coming years, he held breakthrough residencies at two of London’s most iconic clubs, Ministry of Sound and Cream, as well as returning numerous times to Ibiza to play at Amnesia and Pacha. In 1988, Oakenfold established his groundbreaking Record Label Perfecto. Established with a mission to release innovative dance music, Perfecto continues to be on the forefront of the trance scene to this day. In addition to his work in the club circuit, Oakenfold has also broken out into the mainstream, earning himself two Grammy nominations for his contributions to Hollywood film scores and collaborating with The Red Hot Chili Peppers, Gnarls Barkley, and others. Despite his wide array of success, Paul Oakenfold has never lost sight of his club roots. He continues to put together astonishing DJ sets for hungry music lovers across the globe, frequently playing in small dance clubs and in front of massive crowds at festivals. A true master of his craft and a Pioneer for dance music everywhere, Paul Oakenfold is set to deliver a truly special set at Avalon this Saturday.

Supporting Paul Oakenfold will be the talented and always innovative DJ Ravi Drums. Ravi comes from a background in and passion for drumming, having played in various bands ranging from progressive metal to alternative rock, and carries these influences over to his dance productions and DJing. He has played to crowds at the Super Bowl pre game show in 2008 and the Oscars in 2009, and has performed with notable artists like Will Smith, Ricky Martin, and the Black Eyed Peas. Elected the “Worlds Best Innovative Dj/Drummer” in 2010 by People’s Choice, Ravi is definitely a DJ that will keep you moving with his unique percussion sounds and expert track selection.

Kristina Sky is a bright trance artist from Los Angeles and has been deep into the electronic music scene since 2002. With a slew of releases across the largest trance music labels like Armada and Vandit, and on the mega-label Ultra, Kristina Sky is one of the more exciting artists in the underground trance scene. She has played alongside some of the biggest names in the game from Ferry Corsten to Markus Schulz, and performed at massive festivals from EDC to Coachella. Kristina Sky promises to bring her passionate energy to a night that won’t soon be forgotten.

Warming up the evening will be none other than Tristan D. Tristan grew up in Brighton, UK, and was shaped early on by the sounds of BBC Radio 1 DJ Judge Jules. At a young age, Tristan became entrenched in the UK underground house and trance scene, earning himself a residency at the underground London club Peach. He was soon playing at some of the best clubs in Ibiza, and sharing the decks with the likes of Tiesto, Armin Van Buuren, and Paul Van Dyk. A budding radio DJ himself, Tristan has hosted shows on Ministry of Sound radio and Fuzion FM.

Renowned producer/composer/DJ/ Paul Oakenfold has just announced that his fourth studio album ‘Shine On' will be released in its entirety on July 30th. The...

This year Imagine Festival, the bass heavy super festival in Atlanta Georgia, gave a full thumbs up to Trance. On Sunday they hosted their...