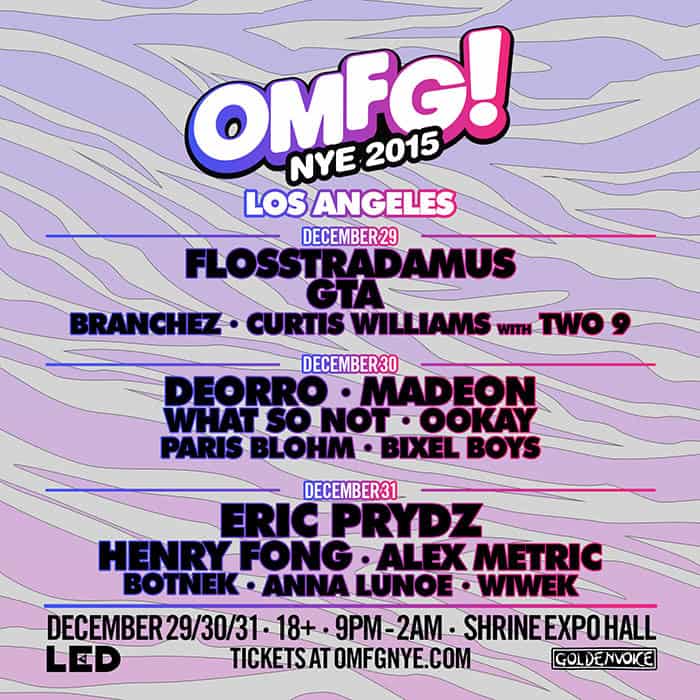 When its New Years in LA, nightcrawlers have options, almost too many. Arguably the biggest party night on earth in the entertainment capital of the world brings too many top notch events to the table, so when in doubt, more is definitely better than less, which was exactly my mindset when deciding to attend LED Goldenvoices 3 day event at the beautiful Shrine Auditorium.

The first night was Flosstradamus’s Hydnation Tour dates, so it goes without saying that the headliners stole the show, and how could you not when there’s a badass prison stage setup behind you with as you blast heavy, in your face trap bass music. The openers were no slouch though, Branchez especially, who really stuck out not just cause he was the only solo act, but because his premium song selection gave the trap hungry audience exactly what they wanted. Two-9 added some variety to the show with Curtis Williams as their MC, who even though may appear to be another Wiz Khalifa lookalike, actually serves as an effective Bass Music hype man. GTA delivered as well with their typical slew of bangers which kept the crowds attention until Floss took the stage, and after that the building went hard until the very end, with moments including their fan favorite Rollup and coercing the entire crowd to Get Low with the Dillon Francis banger.

Night two panned out like most middle editions of trilogies do, which is usually the best part. Not a single act disappointed and in fact the starting acts stole the show. Bixel Boys, who blew up in 2014, capped the year off in triumphant fashion as they showed how much they truly deserve and even surpass the hype around them. They’re talented enough to garner a more primetime spot, but what Bixel Boys did was show the blueprint for how every opening act should perform. Starting off the night modestly with their choices of techy house slappers, the boys knew just when to turn it up, but not too much, playing their remix of Theophilus London’s Tribe and Lazy Rich’s remix of Raw To Da Floor. Then coming down the homestretch of their set, they elevated once more dropping some of the bassiest, meanest trap tunes around with one half of the due, Ian McPhearson, acting as the hype man to drive the crowd into complete calamity all before 10 pm. It was the ideal “that just happened” moment”.

Paris Blohm was pleasant surprise, and despite a small hiccup in the mix, the young superstar played with the same stage presence you’d expect Sander, Laidback Luke, or other festival giants to display. It kept the energy high, and once Ookay came along the event was taken even further with his premium beat choices, going from hard driving electro bangers to expertly timed bass music bombs, giving everybody a little of what they wanted. It’s hard to say whether it was Ookay’s awesome mix or the sheer hype built up from the previous two sets, but it seemed like during his whole set people were going extra haywire. When What So Not finally took the stage to dispatch their unique brand of dubtronica, I must say that a dozen big blow up zebras combined with their smash hit Jaguar makes for a truly wild experience.

The stage couldn’t have been better set for Madeon and Deorro to finish off the night. The French boy wonder always delivers on his frenzied electro sets, where his originals always seem to stand out regardless of how many new hits he throws in. As far as Deorro, there were high expectations for the #19 ranked DJ in the world, but he definitely met them with his unique sense of humor and Dutch inspired dancefloor destroyers.

On the eve of 2015, the night flowed a bit differently. Wikek was well received with his mix of tribal house that did well to set the vibe and Anna Lunoe quickly took the initiative to blast the speakers early on. Onward to Botnek, who threw down a set of mind numbing EDM that kinda represents everything that’s not so good about the scene today (sorry). To give the guys some credit, there was no fault with their transitions or the technicality of their set, but one can only ask that you at least include some damn identity. How praiseworthy is a set full of radio hits mashed up with bigroom house bangers? I support the occasional insertion of rock classics but I can’t help but cringe when hearing a set end with a Bohemian rhapsody mashup followed by the Rocky theme. The following set by OWSLA star Henry Fong was considerably less shameless but also didn’t stand out too much and pulled too much out of the same bag of tricks.

Little did the crowd know what was about to him them as the king of true progressive house made a statement and showed the audience what quality dance music really is and how to properly play it. From dropping unreleased tracks, Cirez D techno bangers, to his spectacular remix of Digitalism’s Circles, which is a once is a blue moon occasion, Prydz dominated the decks like the legend he is, making every preceding act seem amateur. A high moment was definitely the NYE countdown as Prydz never stopped the music until the 10-second mark and played the ever so appropriate New Years Day by U2. Unlike the earlier acts, Prydz understands that while commercial hits can create unforgettable moments in a dance set, they must be used scarcely and with proper build up and midnight was the perfect example of this. The high that Eric left the Shrine on was magical in every meaning of the word. He is dance music’s savior and everyone who witnessed felt his impression.

I almost felt bad for Alex Metric, having to follow up after Prydz’s perfect performance, but he quickly reminded us that he’s Alex freakin Metric and his indie electro style is a rare sound indeed and it absolutely rocks. Dropping tunes like Hope and the Dirtybird classic Okay, he made it mandatory to stay till the very end. The best was clearly saved for last, and it brought a huge smile on my face to see Prydz and Alex Metric just outclass everyone preceding them. You can fake it till you make it, but true greatness needs little convincing.

As I awoke the next day, thoroughly drained and a head all too cloudy, I couldn’t have felt more satisfied with 2014 and optimistic about 2015. Its important to go out with a bang, and a 3-day dance marathon definitely qualifies. LED is easily among the premier party planners in the nation, and what stuck out significantly, besides incredible acts, was the professionalism and true attention to service that the staff brought, a quality usually lost at events of this caliber. The premier New Years Eve event for Angelino’s keeps getting better, and partying 3 days is becoming the new standard for bringing in the New Year.

Written and Attended by: Mike Suarez