Top Predictions For EDM in 2015
Advertisement 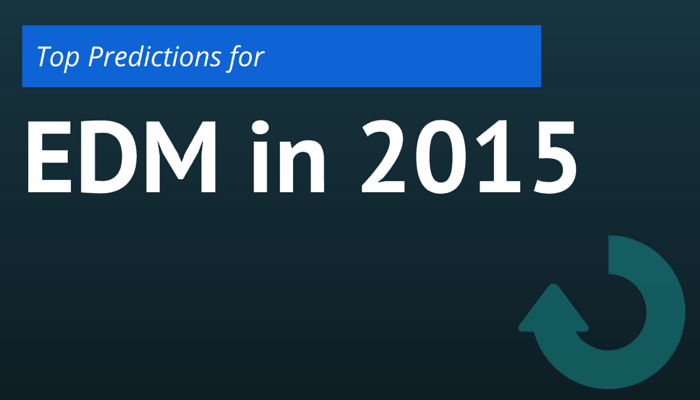 According to the 2014 IMS Business Report, the annual global EDM industry has been growing at a record speed the past couple of years. The EDM industry is growing so fast that it is been said that from 2013 to 2014, EDM has grown more than 38%.

In 2014, EDM saw some incredible advancements begin to take place. Artists such as Kygo were seen performing at the mainstage of TomorrowWorld and genres like Future House begin to take shape. We also began to see the boom of live performances. Whether it was Above & Beyond's acoustic set or Pretty Lights performing with a full band, live performances have been revolutionizing the typical DJ Set.

So what do we have in store for 2015? Here we have some of the most respected Music Industry professionals share their views on what's to come in the 2015 year.

Streaming music will continue to become the norm for fans and a major focus for artists/labels. Tastemaker curation and word-of-mouth discovery will be more important than ever in a time where “sales charts” continue to lose their relevancy. This will further empower the “at-home listeners” who will base their music discovery off of Spotify and Soundcloud.

I believe that 2015 will be a year when musicians will work hard and focus on things that truly matters to them emotionally & musically. People will start to care more about the music individually rather than festivals, which is totally opposite right now. I know so many artists that I have been working with who changed their sound direction just because they were forced to do it to ‘make' it on the music festivals or keep the same to satisfy their loyal fans. Even though they were not musically satisfied with what they do and they felt really limited. Trends are changing really fast and we saw a huge growth for Deep House this year. Basically an overall growth for music that can be played while you read a book/learn or just spend a time with your friends. We can't predict which music direction will be the next ‘trend' in music industry, but I can only say one thing: As soon it's something new and remarkable it will be appreciated, but we are a community and one artist/person can't change the music industry, it can only inspire others to do the same.

2014 was a great year for EDM not only in the US but also across the world. Moving forward into 2015, I predict UK/AUS styles of music UK Garage, Tech House, Future Bass will slowly start to be the crowd favorite by mid summers night. I would also predict that sync streaming will lead the mobile user into the next galaxy of sound, Meanwhile in Japan vinyl record sales will triple by Q4.

“A move towards more organic sounds”

Established artists will be looking to personally enhance their performances and really define themselves as true musicians or artists, rather than the DJ “who just presses play.” What I mean by that is Porter Robinson by example, was tired of the “DJ Set” and really wanted to impress his fans and himself with the Worlds Tour. Also producers are incorporating more instruments to their sets, trumpets, saxes, drum pads, live singing. I really believe the movement is to come from the Artist next year, DJs do not just want to be the people raging in the Sahara tent anymore. They want respect from across the industry. But that just my two cents.

I think a growing appetite for hybrid live/electronic acts will embolden more producers to ditch the turntables they didn't want to use in the first place. I also think we're about to see a new wave of dance music philanthropy, just look at what Bridges for Music and Resident Advisor accomplished with #cycle2ADE this fall.

2015 will be the year of radio play. As pop music changes so will pop radio, and we're about to hear a great deal more from our favorite rising stars.

Akouo is an artist from down under that I found not too long ago, I think 2015 is going to be big for him, if you consider that he just wrapped tours in North America, Aus & NZ, shot to #1 on Aus electronic iTunes chart with his ‘Mesa' EP, has put out music on through Sweat It Out Music!, etcetc & Neon Records, has taken on remix duties for some of the biggest names and they were killer, ZHU,Gorgon City and SAFIA oh and played alongside Flylo Public Enemy, Mr. Carmack just to name a few. And he’s still fairly unknown, maybe I should keep it this way.

In 2015, we'll see more live instrumentation in EDM. At this point, a lot of us have seen more DJ sets than we can remember, so the addition of live instrumentation is a way to create a more engaging experience. Aside form the mainstays (Pretty Lights, Big G, Odesza), we believe this is something that will make a big impact in the industry.

I predict that 2015 will continue to be about the live show and the crossovers between different genres. Bigger performances, better experiences and more live music will hopefully be in the cards for next year as acts look to separate themselves from the pack.

Deep house is going to start peaking. Will be played in top clubs of major cities by the middle of 2015. Streaming will grow by 3-400% compared to 2014.

I predict in 2015 were going to see some major advances in the technology's that Make Up the major part of the festival experience. I think we're going to see some new lighting/video systems that push the limits of the human eye and the photographers who capture the epic moments

2015 is the year that the underground and big room finally come together. Cakes will still be thrown, only they’ll sometimes be shaped like monitors.

An undergound artist I would say who rises in the Future House scene is Pyrodox.

Kaytranada will have a huge 2015 year although he already is pretty popular. He's slated to have his own show on bbc radio 1 tho + his debut LP is coming out on XL Recordings

Advertisement. Scroll to continue reading.
Braedon Alexander
Founder of Next Wave Records
2015 is going to be a beautiful year. The rise of the y generation, the year where the old sharks begin to fall and the newcomers take their thrones.
Soundcloud will be completely monetized and unoffical remixes will be something we look back on and say “remember those”. A soundcloud world filled with orgioanl songs and official remixes will be the content we are presented with.
A new music hosting platform will Emerge and show it's face, daring to compete with sc, spotify and the other streaming services.
Digital sales will continue to fall, streaming services will continue to rise as well as vinyl records.
Big room will continue to lose it's popularity, but will never die. Big clubs and MainStage festivals will always have fist pumping music that energizes people.
2014 had tropical house, 2015 will have a new sub genre arise. Free downloads that use a follow to download platform, will be more beneficial to artists then releasing a song for sale via a label and selling their music.

2015 will be the year where streaming thrives more than ever. Expect digital revenues to grow and a larger share of those to come from streaming – with paid subscription numbers on Spotify rising, more royalties paid out from YouTube and hopefully the successful advent and adoption of Soundcloud's monetization service. Also, more and more creators are realizing the power of social currency. Free downloads in exchange for followers are becoming key in the arsenals for driving growth

Graham Penniman
Board of Directors at EMA

Electronic music will push the hard limits of music copyrights, while more Producers register with performance rights organizations to earn lost royalties. In 2015, we can expect more sites to block, flag and takedown our favorite mixes containing tracks that another writer/producer, label or publisher claims. The music business now has Audiam: an advanced recognition software that can ID less than 3 notes on over 6 million songs. SoundCloud and other websites allowing DJs to distribute (stream/download) their mixes freely are about to change.

The second part to my prediction is DJs & Producers will collect unclaimed royalties that have disappeared for years into the “blackbox”! Want to learn how to earn more and navigate the confusing music copyright laws? Check out my new company SynchBIG, it’s the next big thing in music licensing. www.Synch-BIG.com. We recently launched to help creators and curators license and “exploit” music the right way. We know there’s a better way, SynchBIG looks for solutions.

Avoid having sets blocked, Mixcloud is a safer site for DJs & Producers to release their compilations, simply because a complete setlist is required with each upload. This way Mixcloud can pay royalties, so DJs don’t have to clear master use and mechanical licenses — for now.”