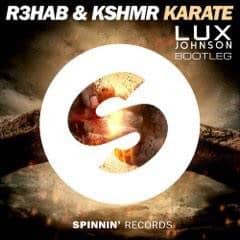 Trap Lord Lux Johnson is back at it with his bootleg, which by its sound isn't too far off from a remix, to R3HAB's Karate. Lets start with the obvious, this track will make you bounce. After a few reworks, the final versions third drop is just bonkers. The sampling is also hilarious, and perfectly timed which adds a lot to the hype of the track. All and all, the kid has talent, and sleeping on him for much longer would be the biggest mistake. Take a listen to Lux's Karate Bootleg here FIRST on EDM Sauce.

22Bullets & Tia Ray mystify listeners with new single, ‘It Isn’t Me’ (with KSHMR)

In a whirling collab of epic proportions, Thailand’s 22Bullets has teamed up with famed Chinese singer/songwriter Tia Ray for the serene new single, “It...

World renowned producer KSHMR brings one of his most standout records to date, unleashing the vibrant new single ‘Lion Heart’. The record sees the...