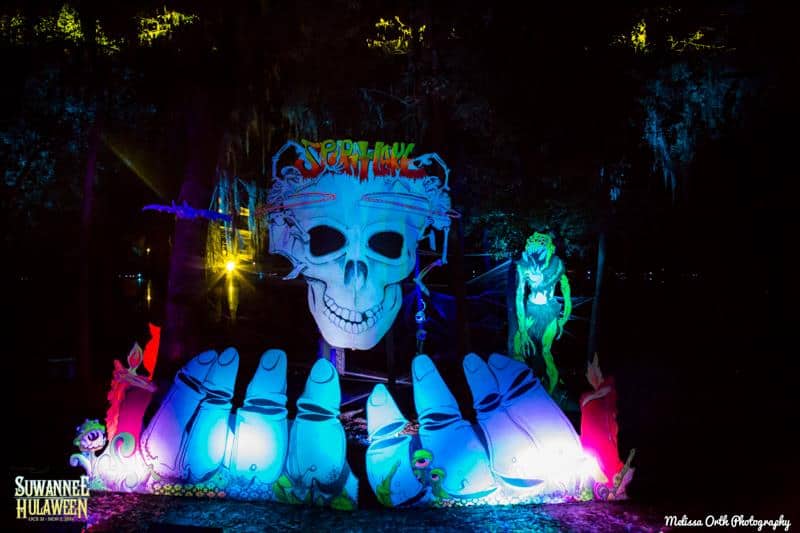 Written and photographed by Melissa Orth

My first Hula’ experience was nothing short of amazing, primarily from all the Cheesy goodness. For the second year in a row , the majestic and privately owned Spirit of Suwannee Music Park & Campground, has hosted String Cheese Incident’s electronic and bluegrass musical celebration. Spanning the entire weekend of Halloween, the music began at 5pm on Thursday, October 30th and ran seamlessly well into the wee hours of Sunday, November 2nd. The festival had a total of seven String Cheese sets with a myriad of diverse headliners such as Thievery Corporation, Beats Antique, Big Gigantic, Shpongle, Keller Williams and Friends, the Dean Ween Group, and Joe Russo’s Almost Dead.

Driving down from North Carolina, I expected a break from the declining temperatures and fall breeze but Hulaween surprised everyone with frigid temperatures dropping well into the low 40’s after dusk. Comparatively, I really have no place to complain considering there was not one drop of rain and all shows ran as scheduled. The Suwannee campground and music venue was easy to navigate and aesthetically pleasing. The tall Oaks were dripping in Spanish Moss.This was coupled with some hardy, old pines that towered over a scatter of tucked away RVs, tents, and hammocks. Festival-goers were decked out in all sorts of lavish costumes from Thursday to Sunday and decorated their campsites with a combination of colorful, heady taps and Halloween inspired decor. The music venue itself had three stages, Main Stage, Amphitheater Stage, and Spirit Lake Stage. There was also a Silent Disco located near Spirit Lake for Vampires and narcoleptics alike kicking off around 2 am every night.

Thursday encompassed the Hulaween Pre-Party. Sadly I didn't arrive in time for Yo Mama’s Big Fat Booty Band, but was pleased to have caught the high-energy livetronica jam band, Particle, and later Electron, started by the former Disco Biscuit’s Marc Brownstein. Their set was incredible, and I appreciated the awesome fusion set that they performed

Friday I started my day with the relaxing bluegrass band, Greensky Bluegrass, at the Main Stage. They were the funky-folk start to my dad. Which was great since it began the day on a laid back vibe. Shortly after, I worked my way over to the Spirit Lake stage to get down to some deep house music via Rob Garza of Thievery Corporation. Never underestimate the power of house music to wake up a festival at 3 in the afternoon! After Garza, I had to recover during Emancipator in preparation for my first ever String Cheese set. Emancipator was a sublime combination of deep melodies and absurd instrumentalization. At first impression of String Cheese, I thought I might be getting something similar to Grateful Dead or Phish. However, SCI, is a completely different beast. Their sound contains bluegrass elements with an infusion of progressive rock, electronica, funk, jazz, and psychedelia jams. Hula-hoopers were twirling non-stop and everyone's heads and toes were bobbing as the sun went down. Throughout the rest of the evening, SCI killed it throughout three sets separated by the DJ set by Simon Posford of Shpongle and followed by Beats Antique and Thievery Corporation. Beats Antique and Thievery Corporation’s performances were nothing short of mesmerizing and energetic while Simon Posford's set was indescribable in it's psychedelic motions.

Saturday, my favorite sets besides SCI were Nahko & Medicine for the People, Keller Williams and Friends, Conspirator, and the New Deal. Having never seen nor even heard of the New Deal, I was completely blown out of the water. The New Deal is a three-man band consisting of a bass guitarist, a keyboard player, and drummer that incorporates progressive house into their jammy livetronica. Keller Williams and Friends played my favorite song, “Doobie in my Pocket” and also did a neat cover of a Grateful Dead song “Scarlet Begonias”. Nahko and Medicine for the People performed in full body white CDC jumpsuits and striped to reveal full clad police uniforms. One of my friends actually cried tears of joy at Nahko’s performance of “Vultures of Culture”. Nahko's set was also environmentally aware, as they pleaded with the crowd to try and stop fracking among other harmful practices. Conspirator put on an amazing set filled with wobbles and funky jams galore. I cant wait to hear them perform again.

Sunday brought yet again more SCI, rocked their last set playing covers and sing-alongs like Talking Head’s “This Must be the Place.” Outside of String Cheese Incident, I was graced by the music of the Dean Ween Group, EOTO, and finally Joe Russo’s Almost Dead concluding a successful, cheesy Hulaween weekend. EOTO was

Spirit Lake evolved this year into a glowing, trippy forest decked out in countless art installations ranging from wall/tree murals and lights, to Burning Man-inspired metal structures spewing fire, and live aerial performances including silks and lyra acrobatics. The incredible revamp of Spirit Lake can be credited to art director, Andrew Carroll, who has previously worked with festivals like Electric Forest. Furthermore yogis and flow connoisseurs had the opportunity to participate in several workshops throughout the weekend. On Sunday, I had an amazing time trying ‘Fly like Spirit’ AcroYoga with Miami native, Joaquin De Teresa. After assimilating with the group via unconventional ice-breakers like “blindly seeking the Spirit”, we split up into groups of three, two flyers and one spotter, and tried challenging and rewarding acro yoga positions.

Overall, I would say that Hulaween was and is a great success. Between all the amazing costumes, excellent workshops and outstanding music, I would say that Suwanee Hulaween is perhaps the best way to spend All Hallow's Eve. If you are interested in checking out all of the pictures I took of Suwannee, click here.