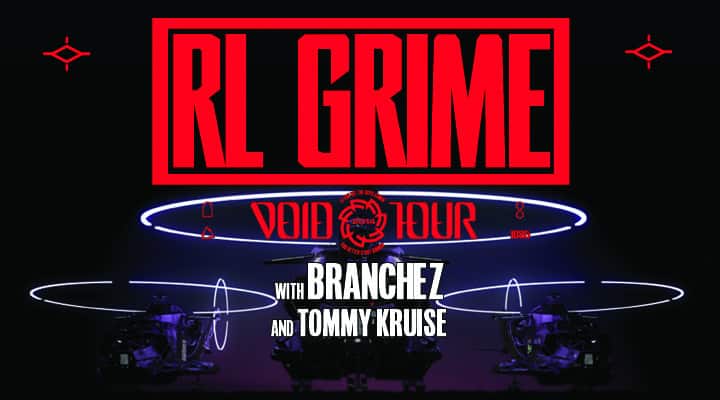 On Thursday October 30th RL Grime brought his tour to the city of brotherly love to demonstrate how there is no one better in trap music than himself. In his 90 minute set he not only displayed his superiority but also gave hope to a genre that is slowly becoming a caricature of itself as well as blow the lid off of the Electric Factory.

It was an all ages show at the iconic Philadelphia venue. The ages ranged from kids who were no more than 15 all the way to individuals in their 50's. This is usually cause for some concern…all ages EDM events have a negative history surrounding them; Avicii knows this better than anyone. Another example of this is RL Grime‘s last show in the city. It ended an hour and a half early because an intoxicated minor decided to take a swing at a cop. That being said no negative vibes were to be found on Halloween Eve this time around. Yes the crowd varied widely by age, but everyone was respectful, happy, excited, and under control. It was fascinating to see how the trap genre has exploded to the point of attracting people of all ages, races and musical preference. This is thanks to RL Grime himself, his earlier work like his remix of Benny Benassi's ‘Satisfaction' paved the way for people like Carnage or groups like LOUDPVCK to make their way into the main stream.

While RL Grime has definitely already established himself among dance music, this tour was something special for him. It was his chance to share with the public for the first time his first full length artist album, ‘VOID'. Before we go any further I need to say that this is one of the best albums of the year. It is masterfully crafted down to every detail, and each song is original and fantastic. The man of the evening went on to an absolutely packed house at midnight as an ominous blast of bass rattled the venue. He opened with his single ‘Scylla' and the crowd responded with wide eyes and open jaws. RL Grime made it clear that while trap music is an ever expanding genre with tons of fresh faces and new sounds, that he is the sole king. For 90 minutes he blasted through a set of relentlessness bangers both old, new and unreleased.

As he slowly tapered off his musical onslaught and the night started to come to an end, it was clear by the amount of sweaty bodies, and stunned faces all around that RL Grime had done something special with ‘VOID'. I wandered outside of the venue after the house lights came up and spoke to some people I saw who were equally as dumbfounded. ‘I simply was not expecting that. That just like…I don't know man, It just, he just, he just changed the entire game in there', one attendee said as he fought to obtain words to express his gratitude for the night of music he was able to be apart of. I could not agree more with his sentiments. RL Grime, you have changed to game since the day you fell onto the scene, and each day since then has only been a build up to the masterpiece that is ‘VOID'.

There are few artists in the bass/trap world that are mentioned more often than that of Graves and RL Grime. These two have been...

Festival season means more and more new music is coming to the surface. And with festival season gearing up, we have new previews to...