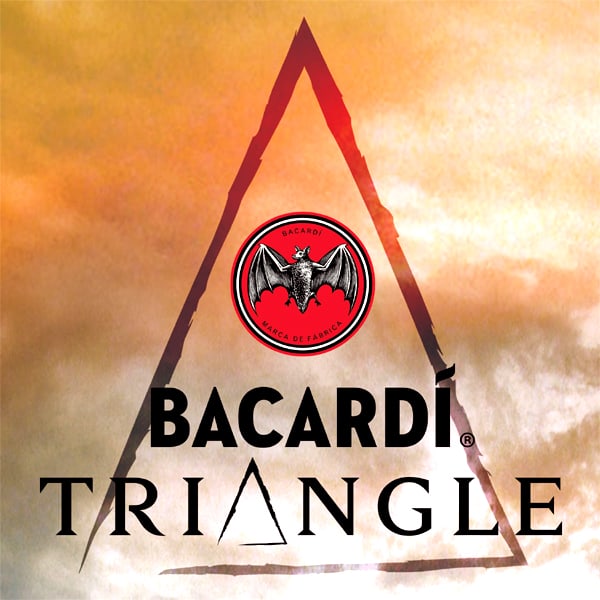 More than 150 years ago Don Facundo Bacardí founded the Bacardi Limited Rum Company in Santiago, Cuba. Last weekend, Don's legacy was survived and celebrated by a crowd of 1,862 at the world's largest private island / Halloween weekend party: The Bacardi Triangle.

The main event of the weekend was a massive beach bash strategically situated on a private island where Ellie Goulding, Kendrick Lamar, and Calvin Harris made the Bermuda Triangle feel like an extension of Heaven… Oh, and did I mention that Calvin was paid a whopping $1,000,000 by Bacardi for his 60-minute set?

Here's how it all went down:

One writer referred the destination by saying: “Calling this place a ‘hotel' is like calling the Pacific Ocean ‘a body of water.' If it weren't privately owned it would have to be called ‘a small town.'” You can find more information on the bohemiath resort on their website.

EVENING: As guests settled in, the night got wet and loud by the pool

Every guest was issued a red fabric wristband, suited with RFID chip that registered for every complimentary drink ordered. Thankfully Bacardi's “drink responsibly” movement was supported as partiers were only allowed 3 free drinks before 7pm, and 3 more after. We gauged the total alcohol consumption somewhere in the neighborhood of 600 gallons over the course of the weekend.

EVENING: Halloween in the Bermuda Triangle by a floating stage and Caribbean Sea

11/1 MORNING: As the rest of the resort recovered from a once-in-a-lifetime Halloween experience, we hopped on a bus bound for San Juan and a very exclusive tour of Casa Bacardi, worldwide distillery headquarters. For a significant portion of our tour, photography was restricted due to the presence of highly combustible barrels of rum.

We were greeted, on location, by Joaquin Bacardi III, President. Our small group of reporters were lavishly shuffled between buildings; offered tastings in coordination with an explanation of the blend. Samples included Bacardi Superior, Bacardi Ocho Anos, and Bacardi Reserva Limitada. We were also given a very private view into the history of the company, and the Bacardi family.

Saturday night's adventure started with a long line. Thankfully, there were locals generous enough to distribute a constant flow of rum-filled coconuts to the impatient guests, anxious to get to the island. Most would be familiar with Palomino as one of the primary locations shot in Pirates of the Caribbean. When we landed on the island, we weren't welcomed by any peg-legged men, but by a Tom Hanks – Cast Away lookalike, who was struggling to balance in an inner tube; gripping his vollyball.

Calvin Harris was the grand finale. Despite performing for a mixed-genre crowd, Calvin threw down one of the hardest hitting sets I've heard him play. His 60-odd minute performance did include notables such as Eat Sleep Rave Repeat, Feel So Close, I Need Your Love, and Summer. As previously mentioned, Calvin was compensated to the tune of a million dollars for his performance at the Bacardi Triangle.

What's the bottom line? The Bacardi Triangle was one of the most memorable experiences this music journalist has ever had. That being said, this was not a music festival. I do not mean that with any negativity – No one implied that the event was supposed to be a festival to begin with. Bacardi's aim was to throw throw one of the world's most epic parties; and they succeeded, unequivocally.

Call it a festival; call it a party – whatever. Regardless of why you were there, you had a good time. Was the idea innovative? Absolutely. Did Bacardi change the Music Industry forever? Probably not. At the end of the day; YOU KNOW WHEN IT'S BACARDI, and I'll always remember Halloween weekend, 2014, as my Bacardi weekend in the Bermuda Triangle.