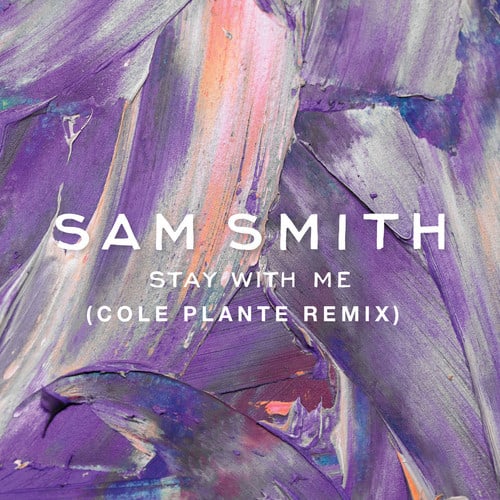 Most people know Disclosure’s popular single, “Latch,” as the song that took Disclosure to a whole new echelon of popularity in the world of dance music – it was also the breakthrough single for the vocalist featured on the track, Sam Smith. The young Brit with the vintage crooning style has been on a steady rise since then, releasing his debut EP, Nirvana, in 2013, and releasing his debut album, In The Lonely Hour, earlier this summer.

The latest single from the album, the chock-full-of-soul “Stay With Me,” has had proper success in such little time – nabbing a hefty amount of radio airplay and breaching the 80th percentile of the US Billboard Hot 100 chart. With “Stay With Me” being Smith’s lovesick confessional ballad, it’s a very different flavor from the dance-floor-oriented “Latch,” but the teenage progressive house producer/DJ Cole Plante has just debuted his remix of Smith’s new single, which, judging a book by its cover, would be a version of “Stay With Me” fitted with a club aesthetic. Or so we would think…

Turns out Plante psyched us out, because his remix of the single is not just a succinct adjustment to a club music tempo – in fact, this remix is something we’ve never seen from Plante before, and it is exquisite. Plante keeps the track downtempo, and brings several new sound elements to the table. From the very start, a warm analog lead line complements the melancholic cries of Smith in the distance. As the analog bass begins to steadily pulsate, the strong sing-along (or if you’re not a confident singer, hum-along) vocals from the backing choir make their first appearance. As they exit, the verse comes in with a soft guitar line and a laidback beat of kicks and claps that give Smith’s vocals the room to shine. As the chorus comes, the beat ceases and strings come in to add on to the emotion in Smith’s voice, and going into the second verse, Plante introduces reverbed wood block tones to liven up the percussion section a bit. The track crests at the bridge, where righteous Synth swells enter the fold, which Plante says were inspired by Vangelis’ iconic film score to Ridley Scott’s Blade Runner. As the final chorus settles the synths and brings in glittery bell chimes, the sing-a-long vocals come back with the addition of the synchronized organ melody from the original song.

This remix is by no means meant to stoke the fires of the party, but Plante’s venture into a slower and more sensual gear shows an admirable range of production capabilities, and it’s safe to say that more endeavors like this would be welcome. However, this remix is also by no means a sign of Plante closing the door on progressive house, and for those that thirst for a speaker-pumping 4/4 beat and upbeat melodies, Plante recently released a new prog-house single, “Before I’m Yours,” which features the dual vocal talents of Brix and Brian Logan Dales, frontman of The Summer Set.

In this article:Cole Plante, Sam Smith