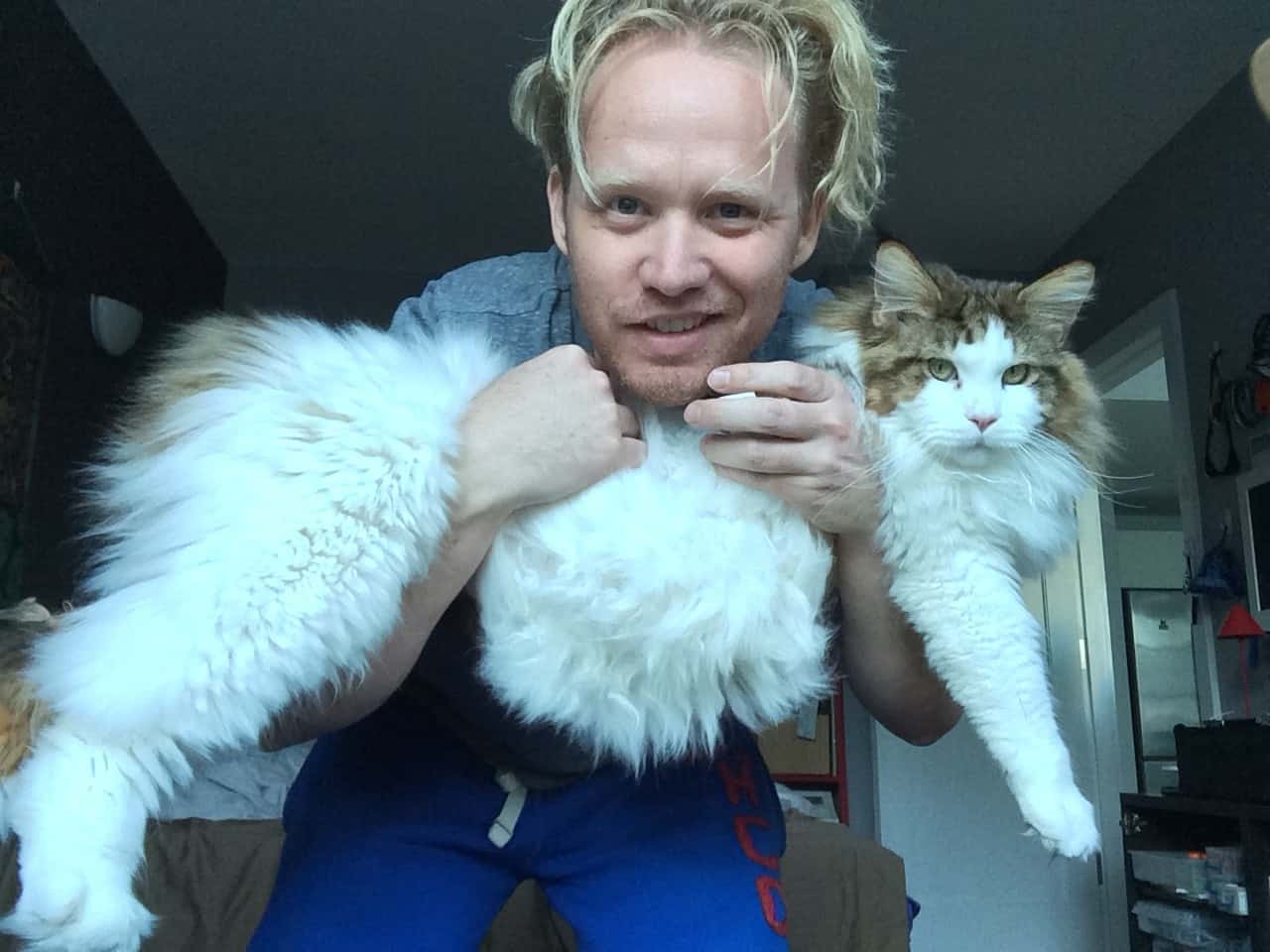 Splurt
If you're not familiar with Major Lazer (and Fools Gold's) director of media and marketing, prepare to have your mind blown. Splurt Zillionz, as he calls himself, is becoming an internet phenomenon for many reasons. But it's not just the memes, the funny pictures, and all of the humor associated with his social media platform. It's a movement of spoofing and internet fandom on a whole new level. Even his cat is making a name for himself.
Special thanks for Splurt for taking his time to do this interview about all things Splurt and Major Lazer. Please familiarize yourself further with Splurt's Instagram and Twitter accounts before proceeding.

What is your background, how does one become media manager for Major Lazer? Where are you based?
I knew the Major Lazer guys for a few years when they were just starting out (and) I was always trying to mix electronic music and Reggae (for) as long as I can remember…since at least the early nineties. My life is a story, there's no short answer. I was born in New Jersey and that's where I went to high school. Shortly thereafter I moved to Olympia, Washington and then to Seattle…then I moved to Hawaii, back to Seattle… then eventually I ended up in Atlanta, Georgia where I finished my college degree. After that I moved back to New York City and that's when I really got involved in music on a whole other level. The drum and Bass Music scene was taking off in New York back then and I was a big part of it, sometimes playing five nights a week. I began to tour overseas and that's when I landed a record deal with Virgin EMI Records in Finland…had a hit record in the summer of 2001. Nobody was doing anything commercial with drum and bass so I came under a lot of fire. I've been back and forth from Sweden and New York until finally about five years ago I moved back to New York City permanently and now I live in Brooklyn.
You have created iPad stands. You are “king of gadgets.” What creations are you most proud of?
I have a lot of gadgets that actually make my life better. My iPad rigs are excellent and very functional. The iPad stand is one of my favorites because I can watch movies in my bed and when my head turns, so does the iPad. My movies stay flat. But I did something even better when I got my projector on the stand so I can watch projector movies on my ceiling. That is a really great way to watch movies. I have a lot of different gadgets that I'll combine to create new things that are more functional. But by far my coolest invention ever is my portable DJ rig. That thing is amazing. Basically, I combined a photo tripod, photo table, a sun umbrella, an iPad stand, and a small Numark USB mixer with an iPad and a portable battery-powered loudspeaker. It all fits on a luggage cart. I can take it anywhere and set it up in minutes and have the ultimate battery-powered DJ rig. Not only does it look really cool and fold up really small into a luggage cart or my backpack, it actually is really functional. It supports full Cue in my Headphones and the way I can mix on that is very similar to the way I can mix on any other system…so I would set up on the corner in the subway and do impromptu little james around the city. That was really fun and it created a lot of attention.
How did you come up with “Splurt Zillionz?” What were you doing before this and what are your passions outside of media and creating?
I came up with my name because I felt I was being pushed around by Record Labels and friends that wanted me to do this and do that and market myself a certain way. I had enough of it. I thought, now is time for me to create something for me. I'm doing this from my passion in my artistic vision whether people see it or they don't and I don't care. That's how I came up with the name Splurt Zillionz. Splurt is a Jamaican word similar to split that means “to get out.” The Zillionz came from my last name that starts with a Z. It just fit and made sense to me. It just came to me, it works. I'm stuck with it. It's original so whatever. Outside of work and creative endeavors, some of my passions are snowboarding, diving, and anything that gets me away from technology and in nature.
How big IS major lazer? Walshy Fire, Jillionaire, Lafayette Bless, and Mela Murder.. are there others? What makes up the whole team? How does Major Lazer function? Tell us about the unit. What are your responsibilities. Who is making major lazer dollars for example.
Major Lazer is always changing and it has changed from the start. Back in the early days it was Diplo and Switch. There was Skerrit Bwoy and 77Klash. Then for a long time it was Diplo, Jillionaire, and Walshy Fire (current roster). It's Diplo's group, but (it) is also managed by a great company called teamwork (TMWRK) and they tie it all together. I created Major Lazer dollars. It was my concept and design that really got me involved and noticed by the management team. I'm not the illustrator, that's a guy named Ferry Guow that lives in London. He created the Major Lazer character and all the illustrations. I do mostly all of the internet graphics that you see out there and I'm a big part of the social media decision making. To the outside it may seem like a big company but it's actually a very small team and I think that's why it's also very successful because we're able to keep it very small. I'll give the credit to their management company (Teamwork), they are excellent at what they do.

What are your future goals as Splurt? Splurta? Where is this all headed? Notable Splurtians?
I always started my brand and everything I'm doing with a vision, that's all I have. Sometimes there are some small plans along the way and some strategies, but it all starts with a vision and the vision can be very loose but I see it like I see the horizon and I move towards it. That's all I know. I don't know exactly where I'm going with all of this all of the time. I do have some top-secret plans, but you have to be adaptable in this digital era because things change so quickly, so I like to look at my technical skills as the real value I have right now because it gives me that ability to create things in response to whatever's going on.
How has your instagram evolved? I am most curious about the use of sloths. Is or was your sloth obsession unhealthy? Have you consciously cut back on sloths over time?
Like I said I was on Instagram before most anybody. I was on it the first week it came out, so for me it started as something very different from what it is now. It was just about taking photos on the rear facing camera of cool stuff like clouds and regular things and applying filters to them, and we were doing that all day to show off our photography skills etc. there was a time where I was obsessed with sloths, I never knew much about them but just became very interested, if you follow my Instagram you know that I go through phases, and sometimes I stick to a phase for a while before I can let it go. The biggest thing with Instagram is that I never knew I had an ability to make people laugh out loud, it's not like traditional comedy but you're making them laugh through this digital media. Its a very different dynamic but I never knew I was so good at it, many people write me, and tell me that they never laughed so hard in their life, my Instagram makes them laugh every single day. That gives me a lot of pride… that makes me really happy that I can make so many people laugh. Laughter is the best medicine.
Message for your fans? Anything else you'd like people to know about Splurt and/or Major Lazer?
I don't really have any special messages to my fans that they don't get to see every day anyway, just to follow me and keep following me and I promise to keep them entertained and do the best Job I can at making them laugh and showing them the coolest stuff that I can possibly show them. But it would be fun if they start showing up at some shows with some Splurt banners and Splurtface cardboard cutouts so that the promoters can recognize me and I can start to get some DJ gigs.
What are some things we should know about you that we can't learn from social media?
In many ways Splurt is my alter ego, it's sometimes what I want to be, what I'm afraid to be, an extension of my creative self. Just like everything else on the Internet, it's very introverted and extroverted at the same time. There is definitely another side to me but as I am developing my social media platform, I have found ways to integrate the real me into it as well… so it's not so much a split personality anymore. Perhaps we can call it “Spurt personality.”
In this article:Diplo, Major Lazer, Splurt Zillionz