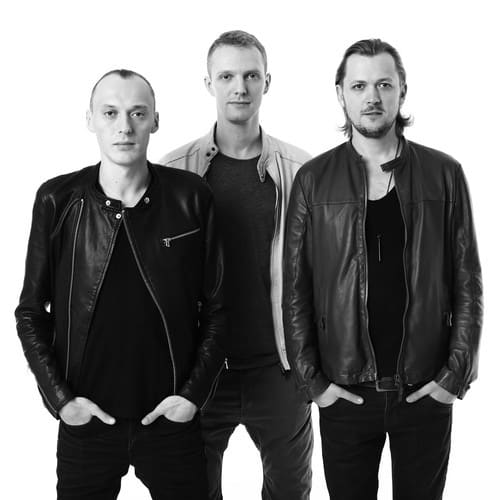 This past Thursday, April 17, we had the opportunity to catch up with Dmitry Burykin and Stanislav Zaytsev of the Russian EDM group Swanky Tunes at the Ink48 Hotel right before they departed to headline a show in NYC’s Stage 48. Formed in 1998 near Moscow, the trio – which consists of Vadim Shpak, Dmitry Burykin, and Stanislav Zaytsev – was quick to produce its own unique, welcoming sound. It began as techno, and eventually evolved into a distinctly big-beat influenced sound. They have completely blown up since then. In 2006 & 2007, they were rewarded as ‘Best Musical Group’ at the Russian Dance Music Awards, and struck big outside their homeland with releases on world-renowned labels such as Refune, Mixmash, Axtone & Size, and Spinnin’ Records. In addition, the trio has been supported and quoted by EDM giants such as Tiesto, David Guetta, Swedish House Mafia, Laidback Luke, and many more. In 2011, in a collab with R3hab featuring the vocalist Max C., the trio released “Sending My Love,” a track which was and still is played on dance floors throughout the world. Later, they collaborated with Tiesto on his famous Musical Freedom imprint. In September 2012, they released their own label, Showland. Showland is also the title of the group’s monthly podcast & radio show which is broadcasted around the world.

EDM Sauce: How did you guys first meet?

Swanky Tunes: We've known each other forever. We went to school together. We all wanted to produce and just joined together.

EDM Sauce: Did you see the recent Swedish House Mafia movie? If so, there was a very big issue in the movie with the group dynamics regarding how they broke up. How do you guys deal with all the issues that arise being surrounded by each other all the time?

Swanky Tunes: Yes, we actually did watch it. Listen, it was their decision. True, when you are three, there is competition between all three guys. But when you know each other for a long time, you're used to doing bad things to each other. You're used to arguing. It's a work in process. But you work to understand. It's good to have competition. Also, three is much better than two. If there's two in the group, and you have to decide to do something, if one guy likes it and the other guy doesn't, it's really hard to reach a decision. But if you are three people, it's really easy. If two members of the group agree to something, then the whole group agrees.

EDM Sauce: What do you think the biggest moment of your career has been so far?

Swanky Tunes: I think it's in the future. We still haven't done something. At least, I think so. Because everything we have done already, we've done.

Swanky Tunes: Yeah, it's pretty big if you want to talk from that position. We got Ultra last year, as well as Tomorrowland. We got many festivals in Europe. With regards to our tracks, you can say one of our best is “Here we Go,” which we co-produced with Hard Rock Sofa. This track even appeared in Fast & Furious 6. Another great track of ours is “Sending My Love,” because honestly, when we finished this track, we didn't expect any reaction to it. It was a gospel-like vocal together with electric house so the combination was really strange – even for us, and we're really into that music. But we figured, “Let's try.” And it was a good try, by the way.


EDM Sauce: You said that the biggest moment of your career is in the future. So what are some goals that you're thinking of exactly?

Swanky Tunes: I would say the next step would be to make different kinds of music; not just straight dance music – such as music for clubs. More vocal tracks. We are really keen on the sound of vocals. We already have a few stamps in the studio that we need to finish. So there are a lot of good tracks that are coming with vocals from Swanky Tunes.


EDM Sauce: You guys have been around for over 15 years now. How do you guy keep evolving with the change in trends within the EDM scene?

Swanky Tunes: We just do what we wanna do. We follow some trends because we like those trends. If we don't like certain trends, we don't follow it. We have a big background of skills and experience. We try to take a lot of the different musical trends we like and combine it and make our own sound. That’s how we can still stay unique. After we released “Sending My Love,” for example, we saw a lot of producers do the same exact track – same bass, same sound. So we thought, “Wow guys, it must be a really good track.”

EDM Sauce: Where did you guys come up with the vocal for “Sending My Love”?

Swanky Tunes: Max C. sent us the vocal and asked us what we thought about it. Our response was, “It sounds a bit too Gospel, but let’s try to do something about it.” We worked with it and made music around it.

EDM Sauce: I know you did a collaboration with Vigel on your latest track, “Get Down.” Can you give us some background on the track?

Swanky Tunes: Vigel is a new, good producer from Russia. We talked with him many times – he's always trying to send us his stuff. So he sent us the drop for “Get Down,” and we fixed some parts that we didn't like. It was a really easy process. Vigel is young, so he's aware of the world around him and doesn't do anything stupid. He was really easy to work with.

EDM Sauce: Who do you want to collab with next?

Swanky Tunes: We don't know yet. But we have some interesting ideas, and we just changed our management company, and they have a lot of ideas. So we just need to choose.

EDM Sauce: Can you give us any hints?

Swanky Tunes: *laughing* No, not yet. But you will see soon on Twitter and Facebook, where you will get all the information.

EDM Sauce: You guys have performed all over the world. How does the North American EDM scene compare with the rest of the world?

Swanky Tunes: It's completely different all over . In Russia, for example, we don't have such an industry. In the Asian market – China, Indonesia, Malaysia, for instance – the market is growing but it's still slow. The USA’s market is similar to India’s in power. The Indian guys on the floor, they're so fucking crazy. But with EDM in the USA, it's not just the crowd's power, and it's not only the music. It's also a really good industry. Everything is set up as it was before. They put the New Music on structure that was on before. And to play here – to perform here – I would say that it's really comfortable. It's like a second home. We are always happy when we get back to the USA.

EDM Sauce: Where have you performed in Asia?

Swanky Tunes: Everywhere. We've played in Hong Kong, we've played in Singapore in Zouk, we've played in Malaysia. We've played in India, Taiwan, and the Philippines. Next week, in the beginning of May, we're going to be doing a big festival in Seoul, South Korea and after that we are playing Shanghai, China. And by the way, the crowd in Asia is very strange. Asian people – they don't really let their feeling get out for the first hour. So when you play your set, for the first hour it's so calm on the floor. The first time we saw this, we were like “what the fuck is going on?” But the second hour… is fucking crazy! So I don't really get what's going on. It's a different culture. But you need to know this.

EDM Sauce: Within the past few years, EDM has blown up in popularity. Do you think it has become too mainstream?

Swanky Tunes: Well, music is a changing industry. Just a few years ago, pop was the big thing. But rock is also a pop music, because it's a temporary music. Everybody is playing rock, so it's a pop music. Hip-hop – it's a pop music too. So it's just the movements. In the 80's, it was hip hop and some rock music. Then it moved to grunge music like Nirvana. After that, it was R&B. Now it's transferred to EDM. *Musing* I hate this term, EDM, by the way. It sometimes sounds really strange because it's so broad. I'd prefer the music be called house, or techno, or something like that.

EDM Sauce: What do you think about pirating?

Swanky Tunes: Whether or not someone buys your tracks, they will still come to your gigs regardless. That being said, I think it's anyways much easier to legally download. You type in the song on iTunes, purchase it, and it's on your phone in two seconds.

EDM Sauce: Do you enjoy playing clubs more than festivals because you have a closer connection with the audience?

Swanky Tunes: No. It's a different kind of energy when you play festivals. We like both. Playing small clubs is more intimate. We can be like, “Hey man, how are you doing?!” and rock all together. But when you're on the main stage in a festival, there's a separation from the crowd, and you can't go and say “hello guys.” But when you see 10,000 people in front of you and they are screaming, that's a different kind of energy.

EDM Sauce: Who is your biggest music inspiration?

Swanky Tunes: For me, I like Coldplay – that type of musical sound.

EDM Sauce: Coldplay? So your inspiration comes from outside of the dance music scene?

Swanky Tunes: Yeah, it doesn't matter for me. Music is music.

EDM Sauce: It's interesting that you say that, because Coldplay isn't high energy music.

Swanky Tunes: Have you been to Coldplay concerts? It's a different kind of energy, but it's still an energy. You feel the thrive on the floor when 20,000 or 50,000 people are singing your song and it's a really great sound in a stadium.

EDM Sauce: What is your advice to up-and-coming producers?

Swanky Tunes: Just do what you wanna do, and don't stop. Roll down, do the fucking music, that’s it. Just express yourself. But someone who just produces a track and waits around won't succeed. You have to talk to labels, talk to producers, etc. After that, everything will happen. But it's not gonna just be *snap* and you're like, “Fuck, I'm a superstar.” No, you have to work hard.

EDM Sauce: What are you going to open with tonight?

Swanky Tunes: We don't know yet. We don’t always plan it. Maybe we will try something new, maybe not. We will see what it’s like when we get there.

EDM Sauce: Thanks so much for your time. Good luck tonight!

Following up on their successful 2021 and start to 2022, Swanky Tunes continue their momentum with ‘Never Look Back’. The Russian DJ-trio have built...

It's that time of the year where everything gets a little scary. Spag Heddy and Dubloadz get us in the mood for spooky season...

Austin City Limits is nearly just two months away. With one of the most impressive lineups for any festival this year, ACL 2019 is...