Mau5trap Vs Pryda: My Journey
Advertisement 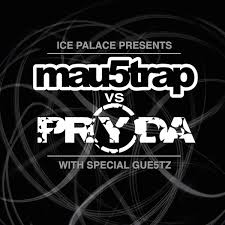 Miami Music Week and Ultra 2014 have come and gone but that week is full of unforgettable memories and experiences – I think I have watched W&W's performance 6 times in the last week alone. I had the great pleasure of being in Miami to attend the epic “mau5trap vs Pryda” event held in the Pop-Up Arena at Ice Palace Studios on March 27th (Note: I want to thank Vanessa of GFE Management as well as EDM Sauce for providing me with the opportunity to attend this unforgettable event.)

I arrived early to check the venue out and I want to recognize the security and check-in teams for their efficiency and super friendly attitudes. The inside was deceivingly big; the dark lighting made it appear smaller then it was, until I had to find the bathroom, and only then did I realize the scale of the venue and hoped it was reflective of the anticipated crowd. Claiming a spot right in front of the stage I eagerly waited. The first person I saw perform was Fehrplay and he did a spectacular Job. It was the first time I had ever seen him live and it exceeded all my expectations. The music was neither dull nor overly crowd-pleasing festival progressive. You could see that Fehrplay was enjoying performing as much, if not more, as we were enjoying listening to his music. The venue was not too crowded at this point, so I greatly enjoyed being able to move comfortably with the music.

After a little while of awesome music, things got a little weird for me. Since I was in the absolute front, I could see pretty much the entire stage and the sides where the sound technicians and management was standing around. Ever so often I would see Fehrplay being interrupted by some random person that I am assuming worked on the sound for the night. This continued
throughout his set until Jeremy Olander took the stage. When Jeremy starting performing the venue had pretty doubled in crowd size. There was a little pushing going on, but that was expected. Similarly to Fehrplay, this was my first time seeing Jeremy Olander perform live and it was incredible. The music was out of this world, until the weird stuff started again. Once more someone came on stage and kept talking to Jeremy Olander, and at one point this person turned down the music on the controller until Jeremy quickly turned it back up. It was confusing for me, but the performance continued and it was nothing short of amazing.

Once Jeremy had his turn, Fehrplay joined him on stage. By now the venue was packed and they both worked their magic to keep the crowd focused and engaged in the performance. Like any big event there is a chance equipment could be work in unexpected ways. Even with those two performing everyone around me could not help but notice the people on stage moving mixers, controllers, and random wires; I do not know if there was technical issues or if it was just to make sure everything was plugged in correctly. Even with the physical distraction of the workers on stage, the performance was captivating.

The moment Joel Zimmerman (deamau5) and Eric Prydz (Pryda) took the stage the audience erupted in a deafening cheer that vibrated the venue. At long last, the two legends of EDM had taken the stage for an unimaginable performance. As those two set up, Fehrplay and Jeremy Olander wrapped up their performance but kept pointing across the stage, pumping the crowd up for what lay in store.

Deadmau5, with out his iconic helmet, started the night with some heavy hitting drums, bass, and immeasurable energy. His Laptop, mixers, and controllers were so spread out and so complicated, he had to keep moving back and forth across his side of the stage to keep the music pumping. Now I know deadmau5 has taken a lot of heat for his Ultra set when he filled in for Avicii – this was nothing like that. This was experimental and different. This was like being introduced to a whole new level of drums, melodies, and heart-stopping bass.

While deadmau5 was performing, Pryda was getting more and more irritated. Either his mixer or controller was not working or was set up incorrectly and after fidgeting with it himself, he had to ask for someone to fix the issue. At this moment deadmau5 thought he would break the tension between the tech team and Pryda by mixing in “Sometimes Things Get Complicated” to the amusement of the crowd.

One of the most memorable things about that night was the passion and desire of all the artists. I vividly remember Pryda waiting for deadmau5 to start his set and deadmau5, feeling the music, asked Pryda for more time. Good guy Pryda. Eric Prydz started his performance at long last. His set started so strong I could not comprehend how it could get any better. Music became art, and the crowd was under the spell of artists painting memories with simply sound. Even after an unbelievable set by deadmau5, he could sense the high level of quality work Pryda was creating. If you follow deadmau5 on Instagram go back to that night; you will see deadmau5 taking a picture of Pryda while standing next to him.

Once those two were all warmed up the battle began; the title of the event was “mau5trap vs Pryda” so a battle was expected. Deadmau5 went first and killed it, but Pryda would rebuttal back and top everything deadmau5 would start with. Just when you thought it was over, the other one would one-up the level of intensity. But it all ended with Pryda threw in “Power Drive.” It was then that deadmau5 knew it was over; having fought so hard, it was sad to see him concede but there are very few things in life that can match Pryda playing “Power Drive” in a live mix battle. Knowing he could not top “Power Drive,” deadmau5 figured he could still have some fun with being on stage and the two continued to DJ, and I mean DJ in the most literal definition of the word. You could see the physical and mental energy they were exerting to out-DJ the other artist. But for me, there was no way of bringing the crowd back to that same insane level as when “Power Drive” went off.

You know it is a great night when over five hours felt like a fraction of that time. The night was much more then a musical performance. It was a journey as each one brought the crowd in to the world of the artist. It is safe to say a majority of the crowd left that night feeling an unparalleled level of happiness. This was not a festival performance. This was not a wild party at a nightclub. This was “mau5trap vs Pryda,” this was an intimate listening party and a glimpse inside the minds of two legends of music. If you are ever lucky enough to have the chance of witnessing this performance live, I do not think I can encourage you enough to make the effort and go do it. This is beyond bucket list material.