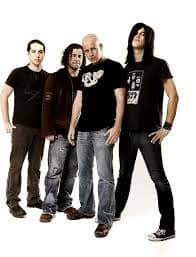 Last Thursday Infected Mushroom played one of only a hand full of live shows on their 2014 North American tour. The event took place in front of an eclectic crowd at the Starland Ballroom in Sayresville, NJ. Infected Mushroom is know famously for their duel sphere stage set up when they preform a DJ set, but last night they brought out the drum set, guitar, keyboard and microphone, and the result was absolutely incredible.

The venue was on the intimate side, rectangular in shape with the stage in front and a 3 bars on each of the other sides. Parking was reasonable at $7 and water was shockingly cheap at $3. The band took the stage at 10pm after an hour long trap and dubstep set by their support for the tour, Butch Clancy. The crowd erupted to the appearance of the Israeli super stars and the band took the energy and ran with it. Lead singer Amit Duvdevani commanded the crowd to put their hands up and jump and we all gladly obliged. The intensity of the band was infectious, and yes, that pun was intended.

The band played a mix of old favorites such as ‘Becoming Insane' and ‘Cities of the Future' as well as recent hits like ‘You are so F*cked'. Guitarist Thomas Cunningham added a unique metal flair to the psy-trance group creating a much more rock oriented performance. Last Thursday showed me that an Infected live show is a much different experience from one of their DJ sets. It's actually almost a different genre entirely. The fans remain the same though, loyal whether the band is performing the psy-trance they are famous for or the intense grinding metal they played last night.

The venue, and crowd and the band made last night an absolutely great time. Infected Mushroom showed that they are truly musical geniuses and deserve all of the attention that they receive. I honestly cannot wait for the next time I am able to see them perform. The staff at Starland was nothing but pleasant and professional as well. Take a look below for some crowd pictures and a video of Infected covering ‘Personal Jesus' by Depeche Mode.

Infected Brings Everyone Together