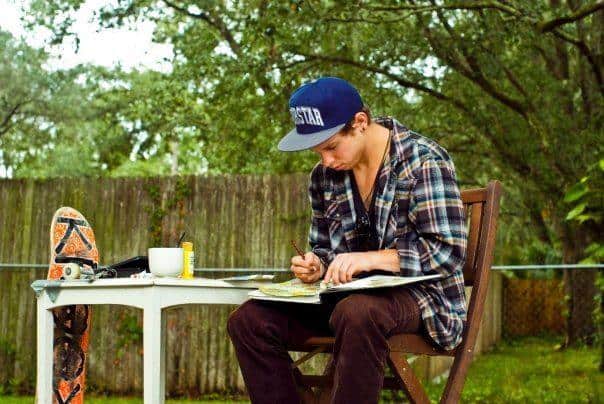 Coming from a background in theater and production, I've always been made aware of all the work and different forms of genius it takes to bring projects together. While many people may watch a music video and think solely of the music, I couldn't help but think of the guy who must have stood behind a camera for hours and behind a computer for days piecing together the content for our viewing pleasure.
In my opinion, it is as much part of the experience and part of sharing music with others as any other role toward the completed product. As such, I reached out to Laine Kelly, a Floridian out of Stuart by birth who has been making huge waves with his productions for names like Pretty Lights, GRiZmatik, Paper Diamond and Two Fresh, to name a few.

Curious of Laine's origin's I couldn't help but ask the cliched question of how it all began. “How did you get into filming? Did you ever go to school for this or was it a self-study development?” Laine laughed and said, “That would have been cool if I was just a genius at it, no I went to Full Sail University in Orlando. As for where it all began,  it was skateboarding that got me into filming. Me and my friends were always messing around and one day we started filming our tricks. I realized I was always more fixated in the filming than the skating”. Laine sighed and says “I remember setting up my mom's VHS camera and doing some dumb stuff that I thought would look great. I then remember watching it and thinking in my mind about all the different angles I was gonna need. It was a map of creation in my mind.”

I asked him about his career, and what it has been like to have taken the journey as he has thus far? “It's really been awesome and kind of ridiculous. When I first got wind of Electronic music, I knew that this was where the action was and where I wanted to be so I went to my first festival, Bear Creek, in 2009. I learned about Pretty Lights along the way and that started all of it. I remember laying in bed and visualizing myself filming them and I wanted it so bad. Another big part of my voyage was my first connection, which was at a Two Fresh, Mimosa and Michal Menert show which I filmed for me. I got the bright idea to send Mimosa an email with a sample and it was kinda a mess. Then in 2010, Dave Najarian saw me filming a show and after we talked for a bit after the show. After a little while, he offered to fly me out to Pretty Lights for New Years 2011. We hung out and he ended up flying me out there for good! It's still crazy for me to think about how it all went down.”

Asking about his style, I was curious if every production different when it's time to sit down and compose the video, to which Laine replied: “”Well there is more of a plan built into Music Videos as opposed to festival and show recaps. The majority of the videos are tour and show recaps and that's when I know there is a story I need to tell. I consider projects a success as long as it evokes emotion in the right context.  The videos are supposed to show the fans a glimpse into the personal lives of these artists that they look up to, which allows them to connect and feel the community vibe.

That is what I prefer doing, collaborating with the artists that inspire me is the driving force behind what I do. I want to gain the respect of the artists I respect.

So as a director you have a lot of control over the final product, what might you say is critical to working with others? “As long as there is understanding of the end points it's all gravy. Fresh ideas will never do a production harm because experimentation is accepted in the scene and is so important to the process. It's critical not to be stubborn and to go with your instinct instead of following a plan.” So whats the creative process like when dealing with an artist? “They have everything to say about the end product in terms of their input. They trust you to put your own style in the piece but some artists have great ideas as well. Grant (GRiZ) and I worked really well together and were totally flowing between one another. Collaborating and bouncing ideas off one another was fantastic, one of the best parts of what I do.

Finally, If you could give any advice to aspiring film makers/videographers, what would it be? “My advice would be: Start! Don't wait a single day or even a single hour. Doesn't matter if you have an iPhone, a GoPro or a nice Camera, just keep going and strive to understand the process.”

Laine's production company is called Mixed Media and you can check out the rest of his work by clicking here. Coming from the perspective of someone who is also involved in the peripheral aspect of the Music Industry, its interesting to see the creative talent that exists even where most people never recognize it. Laine is an excellent example of what can happen when you pursue your goals and the magic that can happen in this wonderful community.

Ever since Electric Forest, the new collab between Subtronics and GRiZ has been highly anticipated. Little did we know, GRiZ had two more tracks...

Daily Bread Opens Up About His Career So Far [Interview}

It's no surprise why Daily Bread, AKA, Rhett Whatley, has made quite the name for himself as of late. The Atlanta-born electro-soul and hiphop...