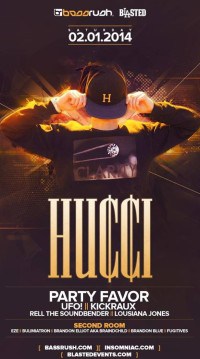 Insomniac sub-brand Bassrush and Blasted Events brought a heavy bass and trap show to Lot 613 in downtown Los Angeles Saturday night. Tickets were $37 after fees for a lineup consisting of Louisiana Jones, Eze, Kickraux, UFO!, Hucci, and Party Favor. Parking outside is $5-10 in secured lots. While there was open spaces parking within walking distance, I did pass by a police officer investigating a broken car window of a concertgoer that was smashed in during the show. Something to consider when you decide whether or not to pay for parking at your next event.

Lot 613 is a spacious venue that has a long dance floor and bar. Upstairs had a aqua visual lighting effects displayed on it's walls and plenty of spots to sit comfortably. The outside smoking area was large and included a bar, Apparel stand, heating units, and a food ordering station!

EZE and Louisiana Jones opened with impressive opening sets. The sold-out crowd wasn't present until Kickraux came on. That's whe everyone started turning up! The bass sounded phenomenal inside main room, definitely Bassrush living up to it's reputation of quality sounding drum and bass. UFO! played next, who LED into Hucci's headlining set. The entire night had consistent energy from each artist, but the crowd definitely peaked when Hucci came on. Party Favor closed out the night, ending a very satisfying experience.

The show was amazing, and in large part due to the attendees. It was an”underground” type crowd that was sociable and didn't seem to have any conflicts with each other. I would recommend checking out music from each artist that performed if you are looking for a hard style, 808, bass mix with lots of attitude. Here's a track to start you with from Hucci called “Ball So Hard.” Enjoy!