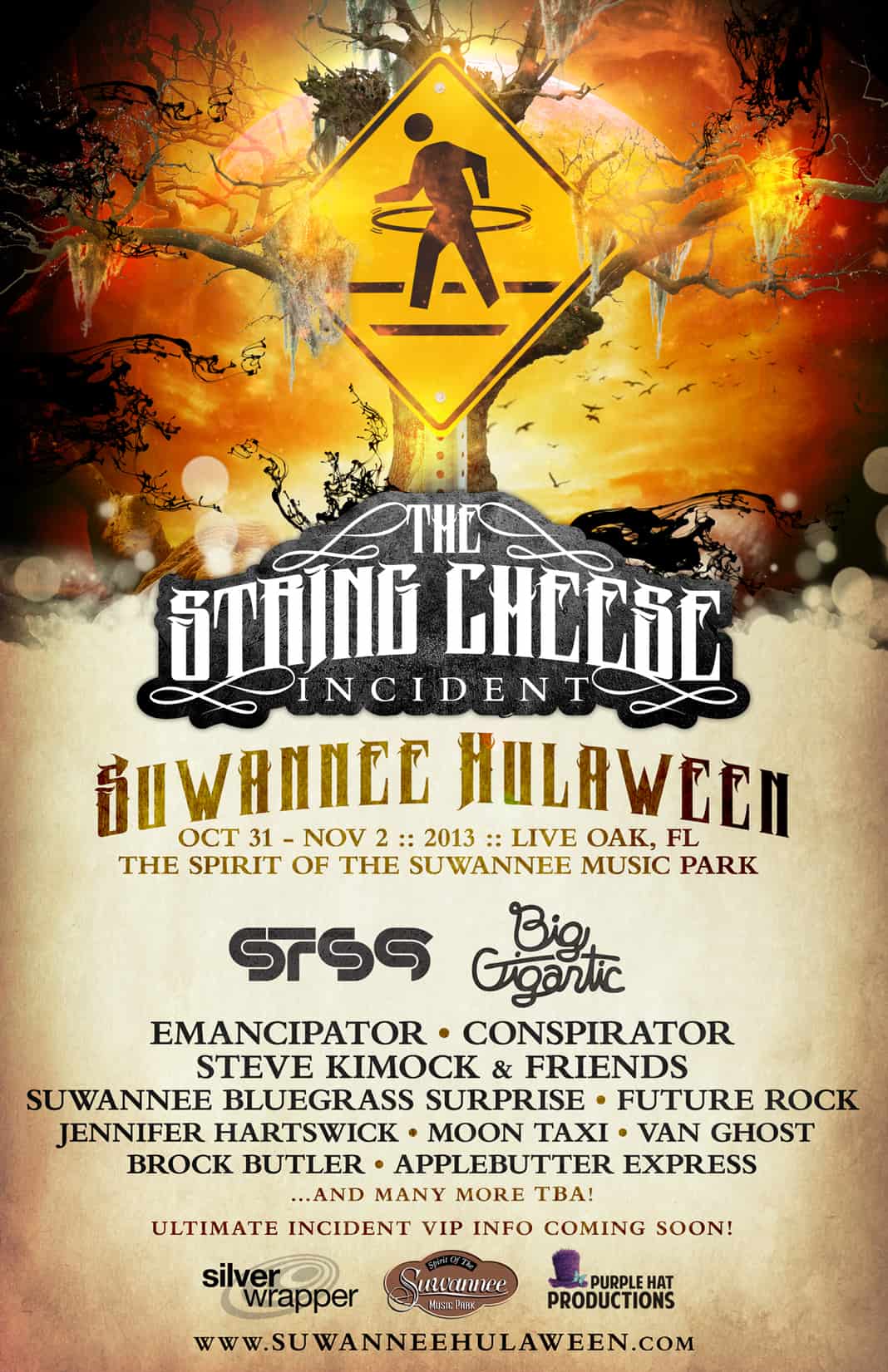 Being the first year of Suwannee hosting the Hulaween event, I must first say that I had a good time with all my friends and getting to experience (what was to me) new music. My review will walk you through all of the pitfalls and achievements as I personally perceived them while attending Hulaween.

As one of the key elements to the making or breaking of any festival, the venue is always something I look at first when I arrive on site. How well do things seem to be organized? Is the path to get to the music clearly marked or is it a clusterfuck? In my probing of such enigmas upon arriving at Suwannee I found the park to be beautiful and relatively well situated. That being said, I didn't know my way around until well into the second day and even then got lost occasionally in the wanderings. While I loved the scenery, I found out that spots are first come first serve, as in there was no people organizing traffic on where and how to park. I personally loved the system since my friends had already been there for a day or so and had a nice spot but I could definitely see the anarchy as being shitty to deal with otherwise. However, it needs be said that this was the very first Hulaween at Suwannee and for all the kinks that come along with a  first year festival, Suwannee held it together and did very well, ending strongly on the last day with STS9 and an amazing performance from String Cheese spanning the rock genre.

Ah yes, the most important part of a festival most would say. Let me preface this section with a disclaimer. I am not usually the “jammer” type of guy, not having been exposed heavily to String Cheese or the like prior to this festival. That being said, I had a great appreciation for the  long hours of performance that all of the artists gave us, in particular String Cheese  Incident as evidenced by seven sets throughout the weekend. The people around me dressing up for Halloween only made the experience more ridiculous, with the spotting of a Taun Taun complete with riding Luke Skywalker, an Ash Ketchum with Pikachu and Squirtle in tow and an insanely convincing pair of Daft Punk helmets and costumes that blew me away. My new experience with String Cheese Incident showed me that jamming can be awesome in the range of tunes and styles to be experienced. Of particular mention in my book was Sound Tribe Sector 9‘s performance on the third day as it absolutely scrambled my mind and had me grinning like a fool for its effects and vibe. The visual experiences throughout the entire weekend were superbly done, with sacred geometry and other pieces of art throughout the grounds being a huge strength of the festival as a whole.

I love live music, especially rock n roll and electronic music and a big part of what attracted me to this festival was the presence of some really great EDM acts like Big Gigantic, Manic Focus, Conspirator, Satoru etc. Since this festival was to have all of these acts, I went with the knowledge that I could get to see New Music and expand my horizons with some Jamming but also get to, for lack of a better word, rage to my EDM favorites. Most all of the  artists I wanted to see originally were on the second day of the festival, Friday. Right before Big Gigantic was supposed to start the electronic evening, a storm front came through. I instantly knew that this was not going to let up and sought shelter while the go-hard community and Big G devotees danced in the rain in front of the stage. The ensuing downpour far out performed the Storm at Counterpoint in terms of intensity and length. It was very surprising all of the attendees as the rain continued well into the night. I was only aware of the raining letting up after all the music was surely canceled, if not for rain as much as danger to festival goers.  As all of the EDM acts I came to see were rained out by the Hulaween, I was rather downtrodden. Much to my disappointment, more than a few particular persons the next day were strolling around with broad smiles on their faces and in my wandering the last day, I overheard several statements along the lines of “good riddance to that shit” and “back to the good stuff”. I suppose I cannot expect everyone else to share my open mind with regards to music, but I can hope that the people I heard say such things be in the minority of the festival population.

I would have to say that Hulaween gave me a great appreciation for Jam music and all of its quirks. While the second day getting rained out really put a dent in my enjoyment of  the festival, I still mark the overall experience as a beautiful success. As said on the Hulaween website, “A new tradition is born and everyone involved says, See you again in 2014!” we can definitely look forward to seeing String Cheese bless the area once again for Halloween happiness hopefully with less rain, which is almost every festival's enemy.

*The contents of this piece are purely the opinion of the writer and presented only as such.