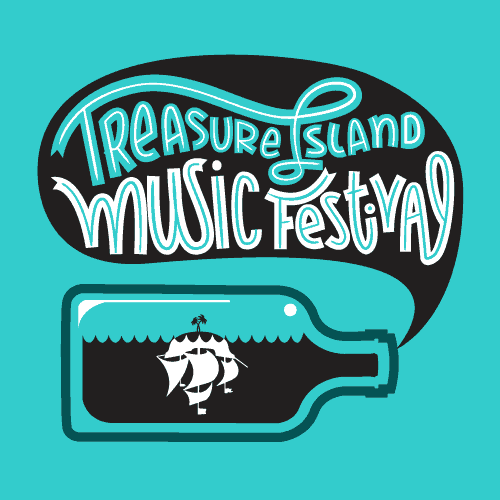 “If we’re going down, we’re going down to Major Lazer,” is one of my friends’ favorite and most repeated weekend sayings. So as you can imagine, we were more than stoked to see the three manned party-producing twerk-causing group pop up on the lineup for this year’s Treasure Island Music Festival, along with several other up and coming, super talented artists.

Although Treasure Island is not your largest, most popular festival (especially in relation to today's EDM festivals), I feel like the fact that it is off the beaten path and not your typical everyday, mainstream event makes it unique and that much more appealing. The weekend at TI definitely takes on more of a chill vibe, Saturday typically devoted to the electronic acts, and Sunday indie.

Saturday, October 19th. Day 1:
Living in a house full of EDM lovers, the Saturday of Treasure Island is the most anticipated day of the small island festival. My roommates and I woke up the morning of, and of course, the mimosas began to flow and bass pumped through our speakers as we prepared for the day.

Because Treasure Island is located halfway between San Francisco and the east bay, getting to the festival requires a 15-20 minute drive. Although the festival provides shuttles from SF to the island, my friends and I decided to arrive in style, and booked a revamped school/party bus to cart us over the bridge and onto the island.

The act I was most excited to see, Disclosure, was up next. I could not hold back my the smile on my face as we quickly moved toward the front of the stage to catch brothers Guy and Howard rock out. As hits such as ‘Tenderly,’ ‘White Noise,’ and crowd favorite ‘Latch’ blasted from the speakers and were expertly blended from one to the next, dance circles formed and fans sang along to their favorite songs. Disclosure’s performance far exceeded my expectations, and the 40 minute set ended way too fast.

After a short recovery session following Disclosure, we prepared to ‘run the trap’ with one of my favorite threesomes, Major Lazer. And no matter how many times I’ve seen Walshy Fire, Jillionaire, and Diplo perform (and let’s be honest, I can never see Diplo enough), they always know how to get a party going. True to form, the dapperly dressed Diplo crowd surfed in a human sized hamster ball and worked the crowd to a point of helicoptering their shirts over their heads.

Sunday, October 20th. Day 2:
After a night like Saturday, there was no better way to ease into Day 2 of Treasure Island than the calming melodies of Haim. The American rock band consisting of sister trio Este, Danielle, and Alana lured and hypnotized the crowd into a calm sway with tracks from newly released album ‘Days are Gone.’

Next, we moved onto electronica pop band STRFKR. Performing hits such as ‘Rawnald Gregory Erickson the Second,’ ‘While I’m Alive,’ and ‘Girls Just Want to Have Fun,’ STRFKR put on quite the show. Fans could not help but jump and dance around as people in crazy costumes ran around on stage and every type of inflatable object imaginable floated on top of the crowd and through the air.

After listening to the unique and relaxing sound of downtempo artist James Blake, the fog from the bay began to take over and deprive the island of any sun or warmth. As the temperature quickly dropped to what a San Franciscan would call ‘freezing temperatures,’ we waited anxiously for crazy duo Sleigh Bells to take the stage. And was it a show. Alexis Kraus and Derek Miller awed the crowd with their performance, Kraus tearing up the stage with her one-of-a-kind vocals and Miller with his jaw-dropping skills on guitar. New tracks from this year’s ‘Bitter Rivals,’ and old favorites such as ‘Demons,’ made me forget about the cold and dance the night away without a care in the world.

Amenities:
9 out of 10
Whether due to the small number of attendees or mere size of the island, the amenities offered at Treasure Island are great. I did not once wait in line for the bathroom, the stage areas are small enough that you can easily secure a good view, and of course, your typical foodie San Francisco eats and treats. The line for ID check and drinks was never more than 5 minutes, there’s plenty of space so you don’t spend your days fighting through crowds of people, and none of the sets overlap letting you avoid the awful decision most festivals force you into when two of your favorite artists are playing at the same time. And if no one of interest to you is on, Treasure Island also offers other activities such as a Silent Disco (or Silent ‘Frisco as they call it here in the city), a craft tent where you can create your own dream catchers, paintings, or various other masterpieces, and what’s a festival without a ferris wheel!

Lineup:
8.5 of 10
Now this is a hard one to judge, since whether a lineup is “good” or not is subjective. If you are into bass-dropping, laser-shining, banger after banger all-night festivals, Treasure Island is not for you. If you enjoy laid back, less crowded, chill music festivals, TI is right up your alley. However, every year when the lineup is announced, there is always some top notch acts booked to perform, complimented by the year’s hottest up and coming artists, such as (2013) Major Lazer, Disclosure, Phanotgram, Sleigh Bells, and Robert Delong, (2012) Girl Talk, Porter Robinson, Araabmuzik, and SBTRKT, (2011) Empire of the Sun, Cut Copy, Chromeo, and Explosions in the Sky, and the list continues. Needless to say, I have never been disappointed in the TI lineup.