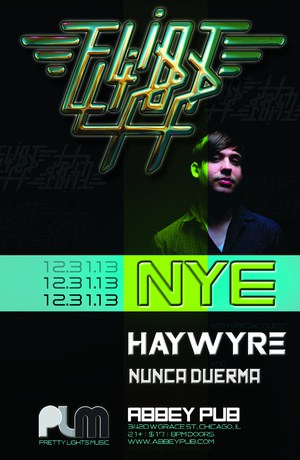 After more than eight years of global touring, seven solo albums on labels such as Pretty Lights Music, Old Tacoma Records, Hefty Records, and Mush, Eliot Lipp's status as an electronic music pioneer is known to scene experts and weekend warriors alike. Recently named one of Vibe Magazines top 10 fastest rising DJs (Summer 2013), Lipp is definitely a mover and shaker in the EDM world. We talked to Lipp about his new album, touring with a live band, Top Gun and his fast approaching New Years Eve show at the Abbey Pub in Chicago. Enter to win tickets to Lipp's NYE show at the bottom of the page.

Ben: Your music jumps between many genres and sounds, even between tracks on the same album – what do you attribute that to?

Eliot Lipp: I think that when I make music, I take everything with me – I never jump ship. If I immerse myself in something, I tend to include that in the personality of my music. I don’t bounce around genres. Instead, I bring everything I know about making hip hop beats with me when I make house beats. As I keep progressing and learning, I take it all with me instead of just starting over when I make a new record.

How long do we have to wait for a new release? What can you tell us about it?

I can’t say because we don’t have a release date for it yet, but it’s definitely more funky.

What have you been listening to lately?

Lots of 70s records and actually, lots of classical lately too. I’ve been listening to [classical] more than I ever have before.

There’s one in particular, one guy named Max Richter who recomposed Vivaldi’s Four Seasons. I’ve listened to that more than any other album recently. It’s an incredible album! And then there’s Dvorchak, Beethoven and all that stuff. I had never really immersed myself into classical before.

Did classical music influence your writing for the new record? Will any Vivaldi samples make an appearance?

[Classical] inspired the compositions on this album a little, in making the songs longer and taking more freedom to go through changes and playing with different themes. I’ve sampled little parts, but it will be awhile before I make a record that is more inspired by classical. I did sample that kind of material – there are strings on the record here and there.

You mentioned a funkier feel on the upcoming record – were there 70s records or artists that were influential to you?

There’s this guy named Ray Bryant who is a piano player and he’s one of my favorites. Ahmad Jamal, too. Those two piano players have been real big to me the last couple years.

How do you go about finding New Music for samples or just to listen to? Do you dig for records or have you switched to digital?

I’m still really into vinyl and I put my last album out on vinyl. I’d say the majority of the music I get is from friends and blogs.

Recently, you’ve been touring with a live band. Did playing and rearranging pieces for them change the way you approached this album?

It did a little bit. I would be working on tracks on the studio and we would book dates with the band, we would rehearse and get together to record. The guitar player, Nick Bockrath in the band also played guitar on the record. There are things on the record that I might not have normally done had it not been for the band.

What’s was your production setup like for this record? Are you particular about the gear you use and collect?

I used to be way more of a gearhead. I buy and sell a lot of what I use, trade-up, upgrade – I’m still very much into synths.

I use the Prophet 600 by Sequential Circuits – that is special because it sounds very 70s. It has a thick, bold sound. I don’t know if they made it just for bass lines or chords but there are a million different sounds you can make with it. It doesn't stay in tune that well, but it’s a very solid keyboard.

Do you have any other projects coming up we should be on the look for?

My main focus right now is wrapping up this album, getting everything ready and getting it put out. I keep doing shows with this band and the more I rehearse with the band, I keep thinking about trying to do a live project and recording an EP or finding a different approach – coming at it as a keyboard player instead of a producer. I’ve never tried anything quite like that. It would be fun to give it a shot and I know I’ll keep doing stuff with the band.

I put out a record a few years ago with an artist named Leo 123 and I put it out on my label. We have another record that we’re working on together.

If you could rescore any film, what would you choose?

Top gun. I love that 80s guitar theme throughout the movie. It’s like an 80s version of the national anthem, but it’s not the national anthem. I’d love to rewrite that. There’s so much room in that movie for great scores for chase scenes… arpeggios, drum machines. They just rely on guitar rock ballads but I think it could be way cooler if it was electro. I mean, it was my favorite movie when I was a kid.

To go along with that, what were you listening to when you were a kid?

I listened to rap, a lot of hip-hop basically. Once I got into high school, I got into punk, metal and all that shit but when I was younger I was just into rap. Me and my friends would memorize all the lyrics to all the really nasty songs and then we’d go to school at recess we would rap to all the kids. They’d all sit around and listen to the bad words and freak out.

I had a neighbor who would borrow [hip-hop tapes] from his brother and we would dub the tapes. We would get Too Short and 2 Live Crew… basically anything with really bad words – that’s all I was in to. My mom bought me Fresh Prince and Run DMC, but I just wanted to hear lots of swear words.

Do you have any end of the year favorite tracks or albums?

The EPROM remix of that Kendrick Lamar track [M.A.A.D.] let me think… there are so many. There was this Bro Safari track that was really good too… it’s a moombathon track with lots of gunshots [Bro Safari & UFO! – Burn The Block].

Max Richter [who] I mentioned before, I've listened to the most. He took The Four Seasons by Vivaldi which is played out and sort of corny – you hear it in cheesy movies a lot, he took it and totally rewrote it. He kept a lot of the original but would twist it and would change all of these subtleties about it to make it cooler. Some parts are darker and heavier while other parts are faster. It’s an awesome approach and I haven’t heard of other composers doing that. It was neat too, because he didn’t care about the critics – there were a million people who thought it sucked but I thought it was awesome.

You’ll be playing Chicago for New Years – do you have anything special planned?

It’s going to be a dance party style set. I’m trying to show off some of the newer songs I’ve been working on, but I want to keep the party vibe. I’m trying to figure out what to remix for my end of the year thing. I haven’t made one yet…

Enter below for your chance to win a pair of tickets to Eliot Lipp's New Years Eve performance at the Abbey Pub!

Jacqueline Jirka, aka Mister Lady, is an independent DJ and music producer whose name is inspired by her life partner’s penchant for dressing in...