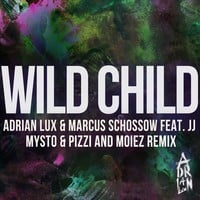 EDM Sauce is proud to premiere Mysto & Pizzi and Moiez's new remix of Adrian Lux and Marcus Schossow's “Wild Child.” When talking to Mysto and Pizzi we asked what their inspirations were for this track in which they said their “initial inspiration for the remix was hearing the original song in its unfinished form months back, when Adrian Lux was in town. He played us just the vocal and a rough of what him and Marcus Schossow were working on. As soon as we heard that guitar riff and vocal we fell in love. We knew right then and there we had to remix it when the time came. Once we got the vocals we started experimenting with bringing back the nostalgic trance sound mentioned above. We kind of first experimented with that sound on our Lana Del Rey – Young & Beautiful remix a few months back and wanted to do it again in a bigger way. A few weeks later Adrian Lux was in town again and during a vibing session we played him what we had so far of the track and he loved it, that gave us the push to go ahead and finish it up, get Moiez involved, and turn it into a big room banger.”

“It took us a while to finish this one actually. We really wanted to give this track a nostalgic Trance feel reminiscent of the early 2000s. Big arpeggiated melody into a euphoric drop. We figured out the chord progression and melodic trance melody fairly fast but once we had that we got stuck on where to take the record next. Just having melodic drops wasn't enough for us and we didn't just want to make it sound like an old nostalgic trance record, we wanted to give the track something modern at the same time, a section that had more energy, something people can dance too, similar to how our latest original “Flight to Paris” sounds, big room, big energy. So we brought our buddy Moiez on to help and collab. We had just literally finished another collab remix with Moiez at the time and loved our collaborative workflow and energy. I think we nailed the rest of the record with Moiez in a matter of a few days.”

You may be asking what's next for Mysto & Pizzi? They said “next we have a really cool, experimental festival-trap collab we did with Just Blaze coming very soon, it will be a free download and just something to share with the fans during Holiday season. Following that our next big release will be another collab we did with Moiez that we can't mention just yet, but we are extremely excited about!”