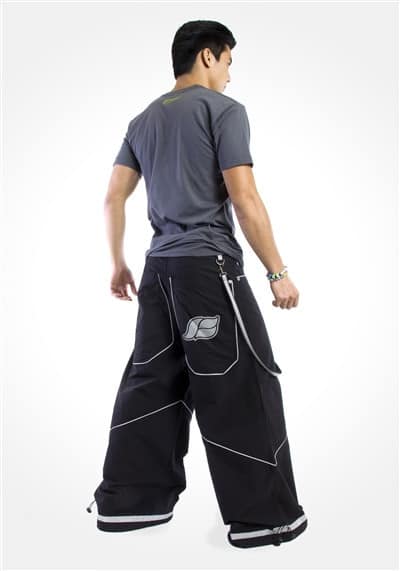 Today we are proud to announce our newest line of clothing in the EDM Sauce Store from Kikwear Clothing. Kikwear is a company whose history dates back to the origins of the scene. EDM Sauce had the opportunity to interview Alex Berenson, CEO and founder of Kikwear Industries to introduce our brand new line of clothes.

You originally started Kikwear back in 1991 and were known for wide-legged pants known as Kiks. What have you had to change in your overall strategy since the rave culture has changed so much since 1991?
Kikwear Industries opened its doors in 1991, but we didn't become a true “rave clothing brand” until about 1993. When we started, it was all about taking the traditional approach of selling brick and mortar stores around the world. The scene was blowing up, but it was a really underground movement. Since the 90's, everything has changed in the EDM landscape from the music to the events to the clothing that people are wearing. Phat pants disappeared from retail shelves for many years starting in 2003 when the scene was in flux. Today, the EDM action is vibrant all over the world and social media has helped push it to another level. Major corporate sponsors are getting in the game and there's even a Grammy category for best EDM artist. That alone tells you how much the culture has changed. Since we decided to re-launch the Kikwear brand in January of 2013, our overall strategy changed 180 degrees. Instead of selling our brand to retail stores, we decided to take an e-commerce only approach. We knew that the brand was well known with the old skool ravers, so the key was to reach the new generation. And the new generation is on the Internet a LOT! The answer for us was to reboot on www.KIKWEAR.com so that we could keep our prices affordable and also control our business on our terms. It was no longer about hitting a delivery date, but more about involving our fans from across the globe on what they wanted to see from the Kikwear crew. Our social media platform has helped us a lot in determining what the ravers want to wear. Our Facebook.com/Kikwear page has been a 24/7 focus group as we love to involve our fans in the direction of our brand. In the 90's it was all about keeping the retailers happy. Today our primary goal is to keep the rave community happy and very close to the action!

How did you originally get into the rave culture?
Every successful clothing company has a niche or target market. With Kikwear, we started out as a “streetwear brand” and evolved into a “rave brand” by 1993. We saw that kids going to festivals and local events were making their own phats out of whatever fabric they thought was kool. We quickly identified this as a growing movement and trend, but there wasn't a single clothing company making gear for ravers. That's when Kikwear decided to take a strong position on devoting our strategy to this vast and growing group of potential customers. They needed a brand of epik gear just for them and we were there ready to provide it.

What need did you see back in 1991 for your products?
Back in '91 we saw a need for long boxers which is how we actually broke into the clothing space. There wasn't a single brand of comfortable boxers on the market so we completely redesigned the “basic” boxer and turned it into a “longy” boxer. The length was longer and they were super chill. Soon thereafter, we saw the same need for shorts and pants that had the same issue. You could find anything that wasn't super tight and fitted. So we took the identical philosophy with a new vibe boxer short and applied it to shorts and pants. Our brand was all about kiking back so it made sense to enter the EDM scene with phat pants and a roomier fitting short. Bam, it took off fast and then the challenge was keeping up with the demand while making sure to release epik new styles the kids would love. We started with a 23″ leg opening pant and then a 26″, 32″, 38, 42, 50, and the grand finale was the company's most famous Kik 69er which is selling better today than it was in the 90's.

Tell us about your partnership with Halsey and how this has been going for you?
Halsey is a men's contemporary bottoms based brand that sells higher end specialty and department stores. It's a completely separate entity from Kikwear. Kikwear is a partner in the company which started in 2010 and so far, so good. It has nothing to do with Kikwear whatsoever other than the company uses our infrastructure for shipping, customer service and production management.

What states do you see most of your business from?
Our business is strong across the USA and we're selling several countries around the world. In the States, we have a ton of action from California, Texas, Florida, New York and Illinois. What's been so insane is that our brand is also reaching small cities and starting to catch on once again all over the United States. We're not just having success in major metropolitan cities and that's a great sign for the company as we continue our comeback. As the new generation of ravers have become more familiar with us and the authenticity of our gear, the brand has been growing a lot thanks to our amazing street team that has pounded the pavement hard. We have representation from our street crew in every state plus an International team covering Canada, Australia, Germany, and the U.K. We also have an epik resident DJ team that has played a tremendous role in helping our brand's visibility.

What's your thoughts on the current state of the rave culture and Electronic Music?
I think that the EDM scene is on absolute fire around the world and only getting stronger. There are so many talented artists and the music they're banging out is more creative than ever. The rave culture is simply amazing because everyone has this sense of freedom and individuality that makes this culture different than all others. Ravers are so unique and have an energy about them that is just insane. It really is all about P.L.U.R.R and not many movements can say that they've got a real interconnection with their music like the rave scene. EDM is in the midst of a major transformation in a great way. There are so many unbelievable genres and new ones are always popping up. We've got techno, house, trap, hardcore, dnb, progressive, trance, breaks and a myriad of hybrid genres that are making the music aspect progress in a big way. There seems to be no end in sight with the creativity coming from EDM. Electronic music is unlike any other category and it's getting more exciting by the day!

Tell us about the “relaunch” and what has changed?
The Kikwear re-launch has been incredible! The biggest difference in our approach today vs. our breakthrough back in the early 90's, is that we're so in touch with our fans and customers on a personal level. We've got a street team and DJ team as I mentioned including S3RL, Sc@r, Rob Gee, Jimni Cricket, Nobody, Ian K, Maromi, Kitsch, REL1, Hardbass Addicts and other incredibly talented artists. We're sponsoring EDM events all over the States and Canada so we're getting to know people on a much more intimate level than before. Kikwear is a brand that every raver can relate to because we're authentic and somewhat iconic since we've now been around for 22 years. Today, Kik is one big family which is so important to me. The fans, customers, street team, DJ team and of course our staff all comprise one big happy crew. We're so much closer to the action than back in the 90's and we've also become very involved with the music aspect of the community. We love to feature both known and unknown artists on our Kikwear Morning Mix FB segment. We've also got a Soundcloud page at Soundcloud.com/Kikwear which is our growing music hub. It features tracks and mixes from our DJ and Street teams in addition to other artists. Everything has changed and evolved in the past 10-15 years. There are so many exciting things on the horizon for Kikwear Industries. Our Kikwear brand is going to be expanding its pant offering in the next couple of months as it launches new styles focusing on the 20-26″ leg openings with new denim and non denim dance pants. There are thousands of Kik fans that have been asking for new pants that aren't so phat and we're accommodating them. We're known for our phat pants and have them now with a huge customer base, but for us it's all about becoming a brand for everyone, not just a segment of ravers. Next up is our Kikgirl re-launch which was originally slated for Spring/Summer '13. With so much happening with the Kikwear brand this year, we decided it must best to reboot our sister brand in the Spring of 2014. The launch will consist of pants, skirts, tops and accessories. We know that there's a lot of pent up demand for KG to hit the stage, and it's coming!