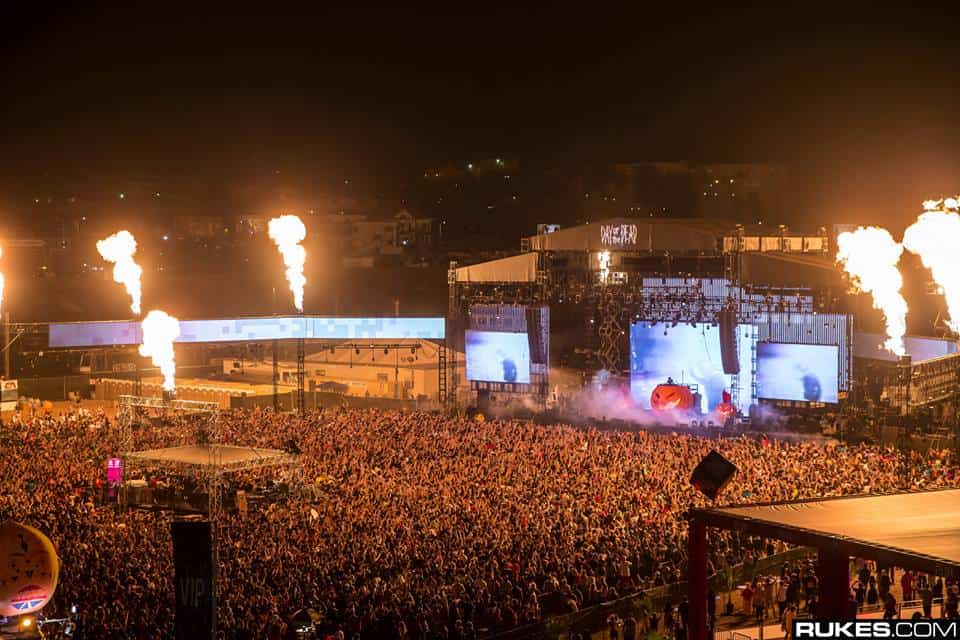 Around 10:30 on Sunday Night I couldn't believe my eyes, before me the infamous Cube took light and Deadmau5 forever changed my outlook on electronic music…

What does Halloween mean to us growing up: eating way too much candy, staying up late, and one night of ultimate freedom to pretend to be whoever we want. Flash forward to our adult lives; there is still no sleep, we dress even worse, but there is a different kind of Kandi involved. I'm talking about festival week in the Golden State that gave way to HARD's Day of the Dead, Escape from Wonderland, Spookfest, Rob Zombie's Great American Nightmare, and so many other events that made this week really special.

My festival week started at Oracle Area on the 25th for Live 105's Spookfest. With a stacked one night Lineup featuring Sebastian Ingrosso, Empire of the Sun, A Trak, Nervo, and Mord Fustang I went into the night with so many high expectations. Unfortunately I woke up the next day feeling nervous about the future of EDM and scared that maybe someday something that I am so passionate about could be gone… Flashback to the preceding evening; I arrived on scene at Oracle Arena and immediately went to the press check in. As I arrived we were huddled into a gated area, where we were given our press briefing. I was shocked on our limited access to the venue including no floor shooting at all, escorted every step of the way me and my team handed over our badges and gladly took our GA tickets. I felt bad, the reason why press is there in the first place is for the ultimate prospective, the all seeing eye if you may. We want to make everyone look their best; the promoters, artists, venue, fans, etc… If you won't let us do that, we really aren't able to do our Jobs. As I walked back outside to enter through a different gate I saw a line that was way too long for its own good and a large amount of disgruntled event goers. It seemed to me that people believe just because you have corporate money, you can just buy events. Insomniac's slogan may be the best in the business “the most important Headliner is ‘You.'” The most important part of any event is the ultimate fan experience, a completely successful night from the second a fan walks onto the grounds until the time they leave at the end of the event. I understand that things come up, that is life, but the night seemed sloppy and like Live 105 did not really have control. The music was amazing and all of the artists killed it, but several times announcements were made threatening to end the night because of poor fan behavior. Maybe Spookfest has finally become played out as I'm sure I wasn't the only fan who left with a poor taste in his mouth.

I ended my long and extremely remarkable weekend in LA for HARD's Day of the Dead being the biggest HARD fan seeing as Gary Richards and crew never disappoint. This lineup was stacked; Skrillex, Boys Noize, Calvin Harris, Pretty Lights, but only one artist really deserved the crown of the weekend, the man, the Mau5, the legend himself Joel Zimmerman, aka Deadmau5. Headlining the second day on the main stage I really didn't know what to expect from Joel, what tricks did have in store for us? He came out and dropped a 100% Mau5 master piece to a relatively mainstream crowd. A set that highlighted with the return home of Ghosts & Stuff, I could not have been more thankful for the experience. I heard people around me yawn and say it was putting them to sleep, even go as far as yelling, “this is boring!”, but hearing all of this just made me fall in love with the set even more. Those Mau5 ears didn't make themselves the most recognized symbol in dance music today adhering to the mainstream wants and needs. No, the Mau5 name is what it is today because Joel constantly strays away from the norm and puts himself in a class of his own. There will only be one Joel Zimmerman, one Mau5, and one cube, and I don't know if Joel will ever read this but you gave me faith Sunday night, I haven't been apart of something special like that in a long time…

As we enter a very pivotal time for EDM that can make or break the future of this industry, we need to remember what is really important to all of us. Great music, spreading love, and enjoying the experiences no matter how big or small they are. Music isn't about G-6's and poppin' bottles, music is about making Mondays bearable, break ups easier, and turning the shower into an Oprah Hall. I was given a pretty amazing point of view this last week of California, I love my state and more importantly I love this music… Party on guys!

Anthony Keyrouz takes you “Under The Influence”