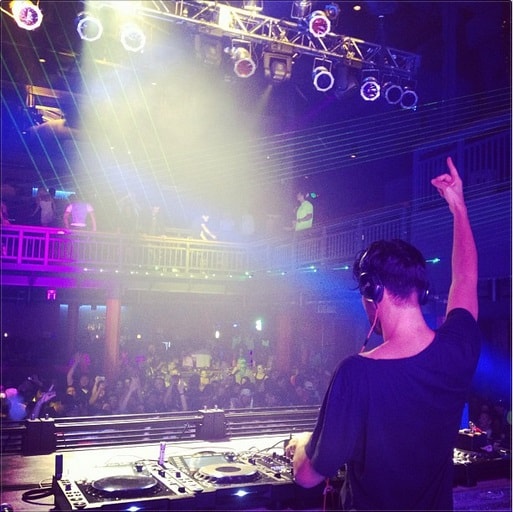 The last big EDM show at The Depot, a budding hotspot for the EDM scene in Salt Lake City, was Big Gigantic. It was a truly unique musical experience to watch two fine musicians work their craft on traditional instruments, saxophone and drums, while mixing in all kinds of EDM tracks. This past Friday, a more traditional, but no less exciting and certainly bigger EDM act, R3hab got on the decks at The Depot and made sure his dirty Dutch roots cleaned the ears of everyone celebrating their de facto Halloween weekend.

Bucking the conventions of most tours who have traveling opening acts, R3hab had a couple of local acts open for him, and not just at early evening hours. With doors at 9 pm, a frenetic and festive crowd gathered, in full Halloween regalia ranging from Walter White to a scantily clad mouse (duh!), to watch a few of the local acts get a chance to belt out their best for their Utah family.

The duo Highjack’d stepped up with an electro house heavy set that was reminiscent of Dada Life with their choices of strong sawtooth heavy synths and a minimally present kick drum being played over video of a fluorescent skeleton played the trombone. They were excited to get to perform in front of a hometown crowd and showed it by seemingly trying to use the hard wooden platform as a trampoline. At the end of their set, they were eager to bring up the next DJ because, not only was it his hometown crowd too, but it was his 30th birthday!

Upon hearing his name, Timone raced from beyond the curtains onto the stage in full devil costume, looking like Garry Marshall in Hocus Pocus and ready to continue the enjoyable maelstrom. Timone used titillating elongated filter sweeps that would build into a drastic contrast in style at the drop; he clearly loved to being an aural collage artist. Timone went from industrial electro to disco house to Danny Elfman’s – This is Halloween to Zombie Nation and somehow made it all seem like it belonged. Timone clearly had no worries as he got the mob ready for the Moroccan Dutchman to fulfill their appetites.

Keeping in the spirit of the night, R3hab strutted out casually onto the decks with a full Native American headdress. Being sure to not waste any time getting right into the night, R3hab released his collaboration with ZROQ, Sky Drop, on the wanting masses. This early energy only fueled Mr. Fadil Al Ghoul, a man with a perfect night for the evening, to unveil tracks like Deorro’s Yee, Mightyfools – Footrocker, his new track he unveiled at EDC, Rip It Up, and even deep house gems like Pleasurekraft & Jaceo and Vedic’s – 313 (Detroit Calling). The music was the main attraction but the sideshows of smoke cannons at precisely timed drops and a well-timed confetti blast, while a grinning R3hab was throwing his trademark Glasses in to the audience, made it clear that this man loves those who have come to see him. He stood on the decks while his incredibly concussive set played and moved like an evangelist TV preacher asking for money. R3hab wanted to make sure that everyone in that place had a chance to enjoy what they came for and think to themselves the next morning, “Well that was worth it.”

Continuing The Depot trend of attracting big name EDM players to its venue, Mat Zo will be playing at The Depot this Friday night, November 1st. Luckily for you, Live Nite Events and EDM Sauce, have 5 pairs of tickets to giveaway for the show! Entries will be accepted until 12 ET this Thursday night/Friday morning so hurry and send an email with your name and contact information to brianj@edmsauce.com for a chance to join the party this Friday night.
(Your email will only be used for contact information about the tickets and will not be distributed or used for any other reason)

In this article:Mat Zo, r3hab