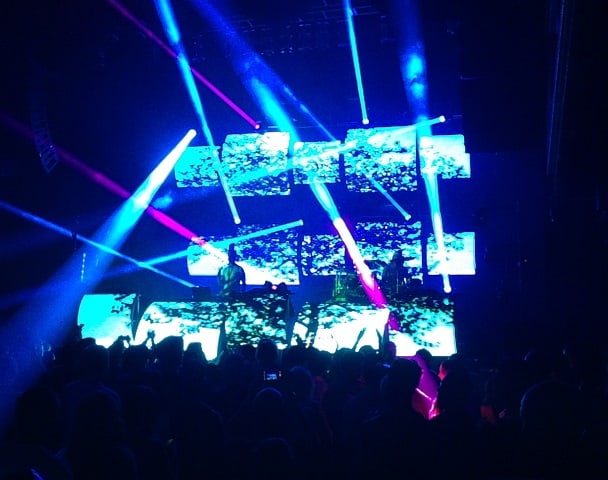 For those who negatively criticize the overarching world of electronic music, one of their go-to points is that those who produce the music are not musicians themselves. They don’t see properly mixing or soundscaping to be musicianship. Well, if that argument ever comes up again, and you’re looking for flawless refutation, please cite the collected works and performances of Dominic Lalli and Jeremy Salken, aka Big Gigantic. For those unfamiliar, Big Gigantic’s music is an amalgam of hip hop, dubstep, electro, jazz and R&B. Dominic does all of the computer/DJ work and plays the saxophone while Jeremy does all of the drumming, live. This is where Big Gigantic finds their true uniqueness as well as proving that virtuosity is not lost in the world of electronic music. I had the chance to see Big Gigantic perform live at The Depot in Salt Lake City, Ut this past Tuesday, put on by Live Nite Events.

As per usual, I show up early to catch a glimpse of the opening act as there have been many times where an opener can unexpectedly pique my interest and expand my musical catalog. On this day, the opener was the prolific Canadian glitch/dubstep producer Ill-Esha. Standing behind the elaborate setup of Big Gigantic, Ill-Esha brought another distinctive talent to the stage; she sings her vocals live on stage while mixing and even looping her own vocals. With foot-long blue feather earrings dangling from each ear, Ill-Esha seamlessly flew from track to track including an original remix of Blackstreet’s – No Diggity to her own trademark spacy, and ethereal tracks like “Only Fair.” With a coy smile on her face throughout the performance you could she was in good spirits playing tracks full of whiny, G-Funk reminiscent, synths that nicely flowed over the top of low end sawtooth heavy, chest rattling bass. Even with a largely apathetic crowd, Ill-Esha still showed what she was capable of as a gifted singer and DJ and was gracious in her thanks and fully whetted everyone’s appetite for Big Gigantic.

The lights dimmed and Lalli and Salken casually walked out on stage dressed in plain white t-shirts and white jeans. Salken had an added headband and Glasses that made him look like the drummer mashup of Marc Maron and the, hypothetical, fourth Hanson brother of Slap Shot fame. Dominic spared no time in flaunting his virtuosic like improvisational skills on the saxophone, flawlessly belting ferocious scalar, blue-note filled melodies that hearkened back to the golden age of bebop while remaining in the now by being coupled with the background precision of Salken’s bombastic drumming. It also should be pointed out that while Lalli is playing saxophone he is also in control of all of the DJing aspects of the performance; it truly is a style of virtuosity that we have never been introduced to before. It was readily noticeable that these two have been playing together for a while and were totally in sync with each other throughout the performance. Big Gigantic blazed through tracks like DJ Fresh – Louder (Doctor P & Flux Pavilion Remix), plenty of their own remixes including Jay-Z – Can I Get A.., originals like “Sky High” and new/unreleased tracks like “Blue Dream,” which must be a nod to a certain strain of the Cannabis variety. Big Gigantic also brought a light show that was not simply there as a way to distract from the performance of the artist, it was presented in a way that was carefully molded to every song and never took attention away from the genuinely impressive instrumental mastery taking place on stage.

With all of the attention being brought upon electronic music in general these days, it is not just refreshing, but important than musicians of this ilk are raised up as bastions for the genre. Even if you don’t find the music of Big Gigantic to be of your liking, I urge you to at least go to their show and see the skill that Dominic Lalli and Jeremy Salken are capable of. And lucky for all of you who haven’t seen them, they are still on tour and you can find the rest of their tour dates, here.