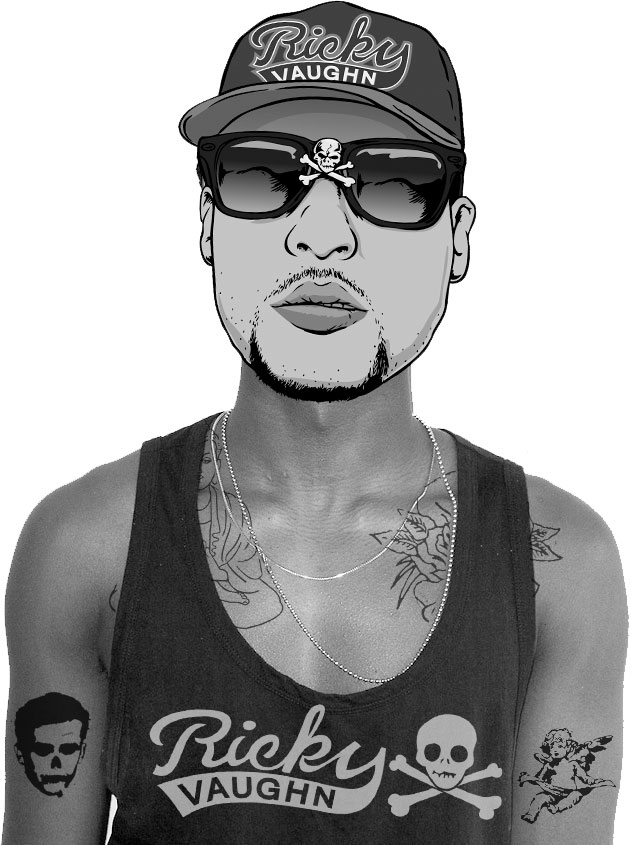 As his new EP Wickedest Sound is released this morning, Brooklyn trap EDM producer DJ Ricky Vaughn has been able to share his experiences and plans for the near future with EDM Sauce. With several successful singles and two EPs, plus acclaim from BBC Radio 1s Skream & Benga and Vibe Magazine, Ricky Vaughn is ready to share his life and musical process with EDM fans of trap and hip hop! Look into this New Yorker's history and music, plus listen to some sound clips below. Check out his Soundcloud page and twitter for updates and new music.

Make sure to download his new EP Wickedest Sound, available today on his Beatport profile!

When did you start making music? You originated in hip hop and found EDM Trap in 2009. What about this genre is most relatable to you – how did you choose it?

I started making music in high school, in 1998 at fifteen years old. I found a music program called FL Studio (which I still use today), that was primarily used for “techno” and I started making hip hop beats. In 2009 I found EDM through artists Justice (who I named my son after), Boys Noize and Simian Mobile Disco. Trap music was something I always knew about from the days of DJ Screw, early Cash Money Records and 36 Mafia. My Ricky Vaughn alias was a name I had made records under, but I never had a real direction for it until April of this year. I chose to go in the direction of trap because I had talks with some major labels, agents, and artists, and the ultimate response was that my trap sound was my strongest suit.

How have experiences with other DJs, producers and vocalists changed your own music?

I've released multiple singles, EPs and remixes with several labels. I've also done a lot of collaborations with DJs and vocalists I admire. I learn a lot from collaborations because I share ideas and have ideas and techniques bounced back at me that continue to help me grow as an artist. I'm not the biggest fan of collaborations, which probably sounds like a contradiction, but it's because I usually get stage fright when it comes to sharing ideas. I compare it to Biggie when he used to write lyrics, and he would take the beat on tape then go drive around and write the lyrics in his own zone then come back and lay them down on the song. I do the same with my production where I'll light up a spliff lock myself in the studio and just zone out on my own, making the beat until I'm completely happy. Only then I'll share it with the artist, collaborator or fans.

How do you feel about how EDM is expanding and growing more popular. Your music is getting a wider audience than ever before as EDM and EDM Trap is growing. What do you think?

I think the growth is good and bad. It's great in the sense that so many people are getting exposed and falling in love with it, but at the same time you have the people who don't understand it and only focus on the negative. I see a lot of media focusing on the drug use which I agree is a HUGE problem, but at the same time we should be looking for solutions instead declaring EDM is only about drugs. For me and trap, it is great because I first started making hip hop music and now I can cross over between scenes and reach a wider audience. Also, I will be on Sway in the Morning on Shade 45 on Sirius XM October 28th, and it is a huge blessing because I grew up on hip hop, listening and buying the tapes he and King Tech would put out. EDM helped put me there.

Do you think the trap scene/EDM scene different in Brooklyn than the rest of the country? You describe your music as NY Trap – explain it?

I think any music scene in New York is different from any other part of the country- and I'm referring to “native” New Yorkers. We just have a different mind state as far as making things our own and being competitive, wanting to be the best and being known for that. How I explain my style of trap music is “NY Trap.” I'm a fan of Gangstar, Wu-Tang, Rakim, Big Daddy Kane, Timbaland and the sounds they created so I wanted to see how I could implement that type of hip hop production with the synthetic sounds of edm production. So I began digging for drums & breaks off old school records, then taking the big chords in house records and mashing them together with 808 bass drums from the trap records to create my sound.

Who are your idols/largest influences? Any genre, not just EDM.

For production Timbaland has ALWAYS been my biggest influence and idol. The Welcome to our World album really opened my eyes to a different side of Hip Hop & R&B. I was blown away, and from then on I followed everything Timbaland did. Once I got into high school I started producing and emulating his style until I could develop my own. I appreciate Music Production of all types because I know what goes into making great songs. I can't say there's anything I don't like.

Where do you create your music? Or how? What is your setup at home/studio?

I create all my music in my home studio. I'm not a big fan of huge studios. I like to have my own small space to create and keep myself in the zone. I feel like if I have too much space I'll drift off creatively and physically.

How has it changed your home life? If at all.

My home life is all business. Besides spending time with my son, I am 100% focused on music and rarely anything else. Which is probably sad, haha, but it's hard to have a social life while producing, traveling and being a dad.

Your new EP is set to release Monday and it’s your second, the first having two singles reach the top 10 on Beatports Top 100 Hip Hop singles. What is your greatest achievement with this EP- and has your sound evolved? You said it was created to reflect your own background plus sounds of New York hip hop. Explain that, give a few details?

My previous EP All Night Long was so well-received that it definitely gave me confidence moving forward for Wickedest Sound. At the same time I saw areas in my production that needed work, and I know I needed to create something different in order to stand out in the trap scene. On the new EP, I came up with the idea from my previous hip hop production techniques to utilize drum breaks and classic sounds relative to the 90s New York Hip Hop sound. I pictured the 2013 hustler who would typically listen to Jay-Z or Notorious B.I.G., but also has an open mind and might listen to Diplo, Flux Pavillian, or Boys Noize.

Where did the title come from? How did you choose it?

The track “Wickedest Sound” ft. KO-Lition was the first track I made toward the EP and everyone I played the song for told me “This is the one!” I knew this was the sound I was looking for, and it was the basis for my whole EP of the same title.

You create a whole experience for your listeners, with music and videos. You write and direct/edit your own videos. What kind of process does it take to creatively come up with both music and a visual? Why is this important to you?

I feel like video is definitely what helps create the full message a song is meant to articulate. Sometimes ideas come to me as I'm making a song and sometimes it happens by accident. Videos have always been important to me because as far back as I could remember it's what drew me into music and made me feel like I was experiencing the music, not just hearing it. I started making videos out of necessity, I didn't have any interest at first. Recently it has started to become part of my routine for all my projects, so expect more and more videos to come!

You also feature vocals from Brooklyn rappers KO-Lition. How does this add to your sound?

Me and KO-Lition go back about seven or eight years now. I've been producing for them on and off throughout that time. In the “Wickedest Sound” track I wanted a vocal or hook to accent the Jamaican vocal in the track. So I sent the song to KO-Lition and they sent me back the version that everyone has now. I love incorporating vocals into all of my tracks, making them “songs” and not just “beats.”

How do you feel about Skream & Benga sampling your music or being covered for Vibe Magazine, and also the growing positive response to your music in general? Do you realize you have a growing fan base and what does that feel like?

Honestly I feel blessed at this point. I'm forever grateful to the people who have supported the music I have been putting out recently. There have been times where I haven't thought people would care about what I'm doing. I've contemplated not producing anymore because of the stress and pressure I put on myself to be the best at what I do. I don't realize how my fan base has been growing until I actually put out music and it hits a #1 spot, like “Show You How To Do This” on Moombahton.net or a “VIP” w/ NYMZ on Trapmusic.net. I'm absolutely grateful for the success I have at this point and look forward to more of it.

Where do you play your music – clubs? Would a tour be in the works?

Now that I have music that has been receiving a lot of praise, the offers for shows have been coming in. I have five to ten shows to finish out the year, and then I expect to be on a full schedule come January.

What next? A full album? Where do you want to see yourself in the next few months? Any big plans?

I have a free Moombahton EP that will be released in November, then a 100 bpm “twerk” EP out for free in December. I definitely intend to work on an album to have released hopefully by next summer, but I'll have another NY Trap EP before then. The next few months I see myself staying consistent with music releases and continuing to build my fan base so I grow as a brand and artist. 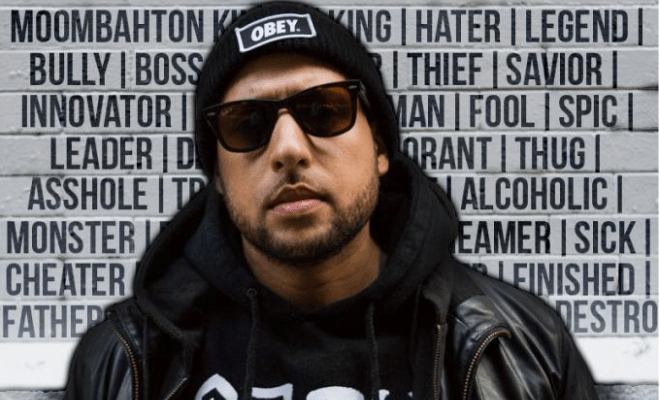 First, I want to apologize about the late release of this, family life & work has been taking up my time. As this is... 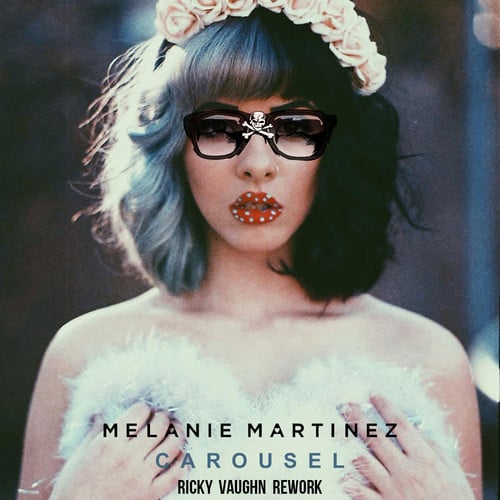 Ricky has been leaking little samples of his work on his facebook for a while now & I was waiting for this one to...